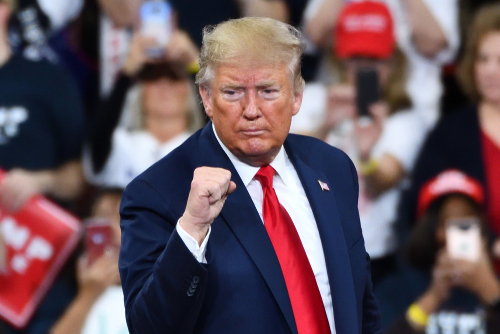 Team Biden might be doing its very best to ignore the illegal immigration crisis at the southern border while pushing the sort of globalism that Americans have come to hate thanks to the way it has shipped American industry abroad, overrun America with immigrants, and led to the financialization of every facet of daily life. In fact, that seems to be exactly what Team Biden is doing.

Trump, however, is intent on doing just the opposite: he’s set his sights on fighting both illegal immigration and globalism with whatever tools are at his disposal, as he spoke about in a rousing CPAC speech last night.

Speaking on the illegal immigration disaster, for example, he told the story of an illegal immigrant beheading an American citizen in a park and, commenting on it, said “Think of this. Animals.”

Continuing, he went on to add that “Every death at the hands of a criminal illegal alien is entirely preventable…this is all preventable stuff.”

He then demanded that, once they retake the legislature, Republicans must do whatever they are able to fight back against the illegal immigration threat and keep such criminals from infiltrating our country, saying:

“Next year, we have to use the purse strings to send a message to every would-be illegal alien all over the world: if you break into our country illegally you will be caught, we will detain you, and we will quickly send you back to the place from which you came or put you in prison immediately.”

Also on that point he demanded that the GOP must stop funding leftist border policies, saying “Republicans in Congress must make clear that on their watch, not a single penny of taxpayer money will go to funding Joe Biden’s open border – it’s a sick agenda.”

But that wasn’t all. Trump also pushed back against a related problem: globalism.

Calling for doing everything necessary to defeat the globalists, Trump said:

“We have to run aggressive, unrelenting, and boldly populist campaigns … and we have to throw off the shackles of globalism and reassert two very important words.”

And what are those two words? What you might expect: “very simply, ‘America First,’” as Trump put it.

Such a speech will likely send the “live and let live” establishment, Conservative, Inc. Republicans into a tizzy, as it means they’ll have to get into gear and start taking the problems far more seriously.

But it’s exactly what America needs, as Trump recognizes. The illegal immigration problem, like the globalism problem, is solvable. But both of those hugely deleterious problems have to be confronted head-on and stopped before it’s too late, which means no more bipartisan “deals” on them that give the Democrats what they want and the GOP nothing of value in return.

Trump obviously recognizes that and is gearing up for a major fight. Let’s hope he inspires his fellow Republicans to start acting similarly and stepping up to fight.

Trump Tells Americans to Brace for ‘A Lot Worse’ Than Recession, Says Only One Thing Can Fix It