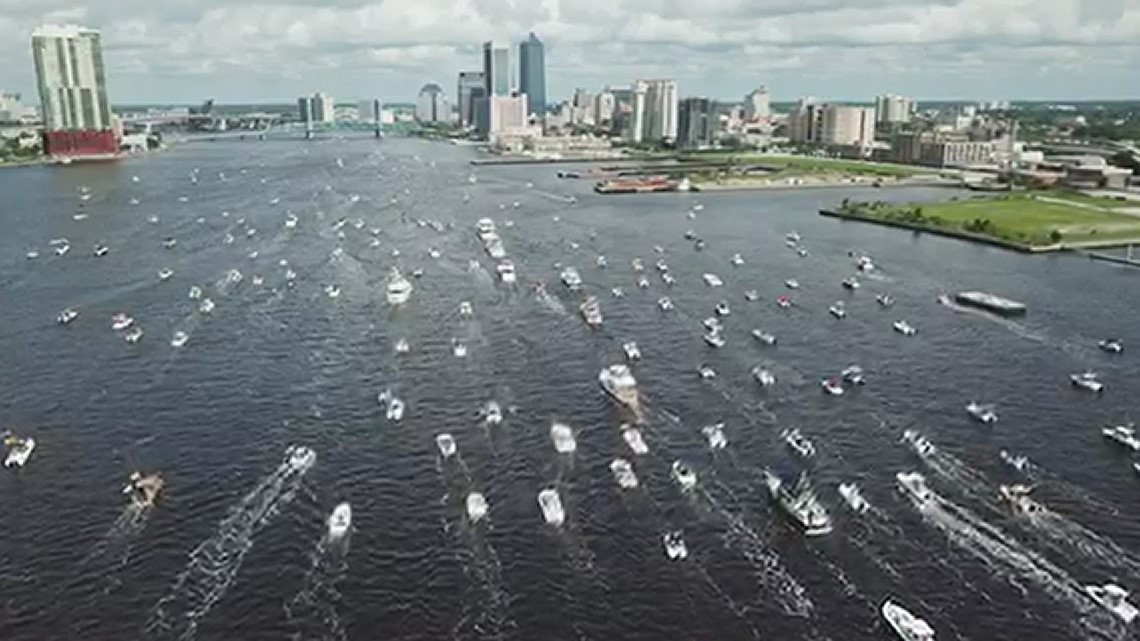 Thousands of Floridians participated in last Saturday’s “first in the nation” flotilla devoted to “freedom first” Gov. Ron DeSantis (R), and Republican officials say they are looking “forward to his victory” in November.

Hundreds of boats passed along the St. John’s River in Jacksonville, Florida, last weekend, decorated with patriotic flags. There were flags that read “DeSantis 2022,” “Daddy DeSantis,” “Don’t Tread on Florida,” and “Don’t Blame Me, I Voted for Trump.” One boat featured a woman waving with a cardboard cutout of the popular governor as she and others waved to the onlookers aboard the USS Orleck, which was docked along the river in downtown Jacksonville. At times, the speakers blared the song “Sweet Florida,” which praises DeSantis for championing freedom in the Sunshine State.

According to Duval GOP Chairman Dean Black, 1,300 boats participated in the event.

“With over 1,300 boats participating, the first-in-the-nation DeSantis Flotilla was a huge success!” he told Breitbart News.

“I’d like to thank those who came out to show their support for Gov. DeSantis and the volunteers who were crucial in making this event such a success. Floridians are united behind Gov. DeSantis and we look forward to his victory and the victory of Republicans up and down the ballot in November,” he added.

Christian Ziegler, vice-chairman of the Republican Party of Florida, echoed those sentiments, noting that Floridians are “excited to flood the polls in November to ensure that he is reelected.”

“As the Democrat Party’s chances continue to sink deeper in Florida, the Republican Party of Florida sailed full steam ahead with our DeSantis Flotilla in Jax,” he told Breitbart News.

“And what better way to spend a Saturday than being on the deck of a Navy Ship with hundreds of Florida GOP County Leaders and watching 1,300+ boats and 6,500 people celebrate Governor DeSantis’s principles, leadership, actions, and successes?” he asked, adding that DeSantis has “led the way for conservatives and by prioritizing freedom, he has won the appreciation and support of Floridians across our great state who are excited to flood the polls in November to ensure that he is reelected.”

Team DeSantis also celebrated the massive turnout for the governor:

Watch live coverage of the event below: