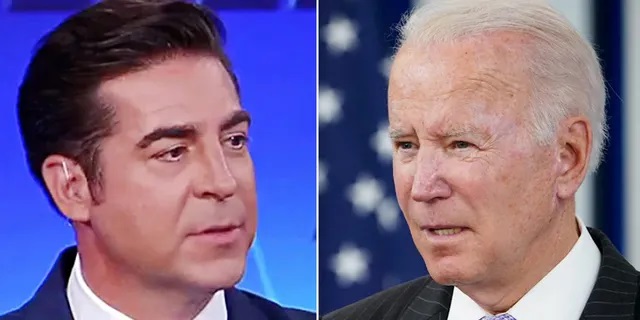 Fox News host Jesse Watters wrecked President Joe Biden and the flailing administration, suggesting that someone else besides Joe is “really running the country right now.” Watters is no stranger to criticizing the president amid terrible inflation numbers, gas prices hitting record numbers, and an overall terrible job by the Biden and Kamala Harris administration.

JESSE WATTERS shredded the president in another episode too, saying the following:

“The Biden White House is also reportedly terrified of the Jimmy Carter comparison and knows how a presidency consumed by crises can turn into a one-term deal, but he doesn’t seem that worried about it, the Carter thing. The president just took a four-day weekend (four straight days) Friday, Saturday, Sunday, today, relaxing on the beach in Delaware.

Does this seem like someone who can fix things? The only thing Joe Biden can fix himself is a sandwich, but Biden is also seething that the White House staff won’t let him do anything. Does that sound like the leader of the free world to you? This is a powerless president who is complaining that his handlers won’t let him outside more. As if that’s going to turn things around anyway. Maybe it’s better for us that Joe is missing in action as the president.

We can’t do any worse than we already are. Somehow the Democratic Party went from Barack Obama and, “Yes, we can” to Joe Biden and, “No, I can’t.” The left keeps running cover for Biden, but he’s running out of places to hide. They’ve shifted from “Biden is doing a great job” to “everything sucks, but there’s nothing the president can do about it.” America has problems and we need solutions, but Joe Biden clearly not the guy for that.”

Jesse Watters also referred to Joe Biden as the ‘napper-in-chief’ after his lackluster appearance on Jimmy Kimmel.

‘Jesse Watters Primetime’ host reacts to the president’s appearance on ‘Jimmy Kimmel Live’ calling it ‘bland’ and ‘boring’ in one of his opening monologues. Jesse Watters suggests that President Joe Biden has hit the snooze button and could be the biggest ‘napper-in-chief’ to date!

Biden’s recent appearance on Jimmy Kimmel falls in line with many presidents who visit late night shows. However, Biden faces even more scrutiny than most because of the skyrocketing inflation, surging gas prices, and many other problems that the White House has struggled to get a grip on.

Biden claimed, during his appearance with Jimmy Kimmel, that gas prices were off the charts because of the oil companies, but his comments were countered by commentary from Brian Brenberg, a Fox News contributor and economics professor at The King’s College.

Biden told Kimmel: “Oil companies, instead of everybody, says, ‘Well, Biden won’t let them drill.’ They have 9,000 drilling sites that they already own that are there. They’re not doing it… You know why? Because they make more money not drilling and buying back their own stock.”

Brenberg said about that, while on “Varney & Co.: “Nobody’s listening to him at all on this because it’s so obvious… All these same oil companies who apparently can’t get it together now, boy, they could get it together under President Trump, couldn’t they… Because we had oil and gas flowing everywhere [under Trump]. But Biden – it’s not him! It’s not him! It must be the oil companies and their greed, which they just discovered now.”

As of now, Fox News reports that at least 20 states, including the District of Columbia, have now hit a minimum price of $5 per gallon of gas price on average, according to AAA.

When it comes to everyday Americans suffering at the gas pump, Biden has been facing criticism and backlash for quite some time, particularly due to his own comments on the situation. Biden suggested that high gas prices are just part of an incredible transition, but that comment came upon angry ears as Americans lashed out in response.

President Biden was out of touch, as usual, and welcomed record-high gas prices, exclaiming that the pain at the pump was part of the US economy’s “incredible transition” away from fossil fuels. Americans are not happy and many of them lashed out at Joe Biden and his failing administration.

“[When] it comes to the gas prices, we’re going through an incredible transition that is taking place that, God willing, when it’s over, we’ll be stronger and the world will be stronger and less reliant on fossil fuels when this is over,” Biden said at a press conference in Japan after meeting with Prime Minister Fumio Kishida.

Instead of raising petrol prices, the president said that his administration’s initiatives had been able to “keep it from getting worse — and it’s bad.”

Then only did Biden give lip service to the millions of Americans who have been forced to spend thousands of dollars more on gas, as reported.

“The price of gas at the pump is something that I told you — you heard me say before — it would be a matter of great discussion at my kitchen table when I was a kid growing up,” Biden remarked before admitting, “It’s affecting a lot of families.”

The national average price of a gallon of petrol was $4.596 per gallon as Biden spoke. According to AAA, several states (at least 20 at this point) have average costs of at or above $5.

Following Russia’s entry into Ukraine on February 24, the United States & several of its Western partners shut off all Russian oil and gas imports, contributing to skyrocketing gas prices in the United States.

To combat this, Biden declared the release of 180 million barrels from the Strategic Petroleum Reserve, which his government claims will lower gasoline prices “quite dramatically.”

“It’s helped, but it’s not been enough,” Biden said on Monday.

In other parts of the press conference, the president acknowledged that the US economy had “problems,” warning that recovery will be “a haul” and “take some time.”

Republicans slammed Biden on social networks, criticizing him of enjoying increased gas prices while Democrats continue to push for a radical environmental agenda.

“Biden refers to the skyrocketing gas prices as an ‘incredible transition.’ They’re saying the quiet part out loud now,” House Minority Whip Steve Scalise (R-La.) posted. “They’re causing you pain at the pump because it’s all part of their radical agenda.”

“Come on! Don’t Make Things Up!” – Biden Snaps at Reporter For Asking About Economists Warning of a Recession (VIDEO)