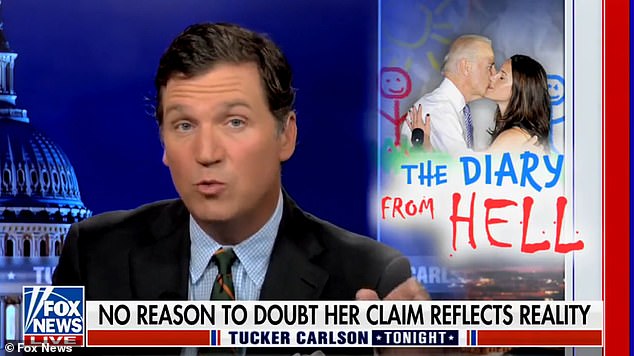 On Friday evening, Tucker Carlson brought up an issue most other conservative outlets and commentators won’t touch. Namely, the fact that Joe Biden is accused of some extremely disturbing things in a diary written by his daughter.

The saga broke into the open last November, after the FBI raided the homes of Project Veritas journalists, including James O’Keefe, looking for information regarding the diary. Accusations that it was stolen were made, but as Harmeet Dhillon explained on Carlson’s show, that’s not only false but completely irrelevant.

I’d ask how this isn’t a bigger story, but we all know why.

Carlson opens by pointing out one of the most salacious charges in the diary, which is that the current president once showered with his daughter, causing her to have sexual compulsion issues later in life. And to be clear, the diary is real. The New York Times confirmed that in a report late last year, which means the only defense here is that Biden’s daughter is lying.

But whether she is or not seems rather immaterial to the lack of coverage, right? Imagine that Ivanka Trump had written a diary entry accusing Donald Trump of what seems awfully close to molestation. Don’t you think reporters might be asking questions about that? Don’t you think there’d be further investigations into the matter to see if the claims are true and how far the inappropriate behavior went? Yet, the media, including the hard news side of Fox News, has completely blacked out the story, pretending the revelations never happened.

Carlson then interviewed Harmeet Dhillon, who is currently representing Project Veritas (and is also a friend of RedState), on the matter. She spoke about how, instead of the spotlight being shined on Biden after the shocking allegations, the story suddenly turned into the FBI targeting journalists for supposedly buying “stolen” property. That led to the aforementioned raids.

But as Dhillon notes, it is not illegal for journalists to possess and publish stolen documents. If it were, every editor at the Times, CNN, MSNBC, etc. would be in jail right now. Rather, the ability of the press to publish those types of materials is protected by the Constitution of the United States. Regardless, the diary was not stolen. It was purchased legally and then re-purchased legally by Project Veritas.

Yet, as Dhillon points out, the warrants mentioned the word “stolen” several times. That was untrue, so how did the FBI get search warrants to raid the homes of journalists over a diary that wasn’t even stolen? The answer is obviously that someone lied, and Dhillon seems to believe it had to have been members of the Biden family and their legal representation. That makes a lot of sense, and I agree, but I still don’t think something like this gets as far as it did without the FBI being in cahoots with the president. They knew what they were doing here.

In other words, this marks another black eye for Dir. Christopher Wray’s corrupt, scandal-ridden bureau. The choice for the FBI to go along with these raids didn’t come out of the blue. There had to be some direction given from the top to take these steps, including from Wray and Biden himself.

Dhillon ends by saying there needs to be a criminal investigation into how we got here. Unfortunately, I don’t think there will be. Nothing about the current DOJ gives me hope they would fairly investigate any matter dealing with the current president. But something extremely corrupt went on here and is continuing to go on. Perhaps it’ll take a Republican president and a new attorney general to get to the bottom of it, and everyone around this situation needs to have long memories.