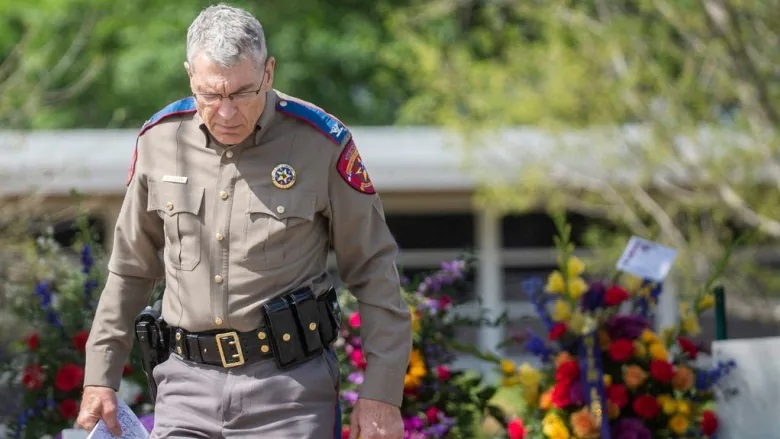 “Surveillance footage shows that police never tried to open a door to two classrooms at Robb Elementary School in Uvalde in the 77 minutes between the time a gunman entered the rooms and massacred 21 people and officers finally breached the door and killed him,” the San Antonio Express-News reported, noting that the information came from a law enforcement official who was involved in investigating law enforcement’s response to the tragedy. “Investigators believe the 18-year-old gunman who killed 19 children and two teachers at the school on May 24 could not have locked the door to the connected classrooms from the inside.”

The doors are reportedly designed so they can only be locked or unlocked from the outside, and police might have assumed that the door was locked. The report said that it is not known if the door to the classroom where the 18-year-old Hispanic male was holed up was even locked.

The source told the local newspaper that it didn’t even matter whether the door was locked because “officers had access the entire time to a ‘halligan’ — a crowbar-like tool that could have opened the door to the classrooms even if it was locked.”

The news comes as a report from The New York Times revealed that a law enforcement official with the city, not the school district, who was armed with an AR-15 style rifle had the opportunity to shoot the attacker before he entered the school but didn’t because he hesitated over fear that he might hit kids in the background.

“The chief deputy sheriff said that any attempt to shoot the moving gunman would have been difficult, and that the officer would undoubtedly have faced harsh criticism and possibly even a criminal investigation had he missed and hit a bystander in the distance, especially a child,” the report noted.

Uvalde CISD Police Chief Pete Arredondo arrived on scene without having a radio at 11:35 a.m. as at least two responding officers were already moving into the hallway outside the classroom door where the attacker was located. Arredondo used a cell phone to call the police department to ask for a radio, a rifle, and heavily-armed backup.

“The decision to establish a perimeter outside the classroom, a little over five minutes after the shooting began, shifted the police response from one in which every officer would try to confront the gunman as fast as possible to one where officers treated the gunman as barricaded and no longer killing,” The New York Times reported. “Instead of storming the classroom, a decision was made to deploy a negotiator and to muster a more heavily armed and shielded tactical entry force.”

Bill Francis, a former FBI agent who was a senior leader on the bureau’s hostage rescue team for 17 years, told the Times that officials “made a poor decision defining that as a hostage-barricade situation” because “the longer you delay in finding and eliminating that threat, the longer he has to continue to kill other victims.”