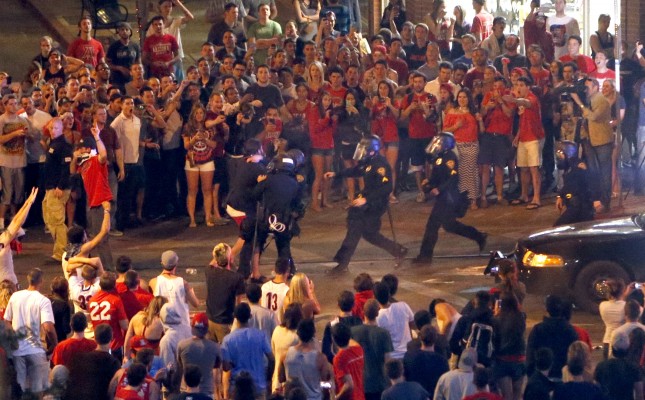 The Arizona Senate was evacuated Friday night after pro-choice rioters and teachers protesting an education funding bill breached building security at the Capitol. Police fired tear gas from windows in the Capitol in a effort to control the mob. Video screen images show protesters entered the Senate chamber.

Wild video by Senator Michelle Ugenti-Rita shows screaming mob banging on the doors while an officer warns a senator to hide.

Kristy Dohnel, communications director for the Arizona Republican Party, “The AZ State Senate is currently evacuating the Capitol. Please pray for their safety…Protesters have broken into the Capitol— Senate voting was in process”

Screen images of protesters taking over the Senate chamber.

People inside the building were terrified.

Senator Kelly Townsend, “We are currently there being held hostage inside the Senate building due to members of the public trying to breach our security. We smell teargas and the children of one of the members are in the office sobbing with fear. I expect a J24 committee to be created immediately.”

Reporter Camryn Sanchez, “Abortion protest tried to get into the senate and we locked down but I think everyone is safe…Update: we can’t leave, but as far as I know everyone who was inside is safe. Just a tear gas smell. Still hoping to sine die tonight according to Fann”

Senator T.J. Shope called the situation a riot, “Good! The situation was escalating beyond control and was no longer a “peaceful protest” but a riot that was endangering the safety of everyone inside the Senate and House of Representatives buildings”

Senator Wendy Rogers, “ossible AZ Senate security breach. Education protesters threatened to break the AZ Senate entryway glass. We assembled to take tunnel to the House. Crowd was dispersed w/ tear gas. Went back up into the Senate. /1…Senate building IS secure. No exiting due to tear gas. We still have six bills to vote on. Tear gas odor remnant in Senate chamber. /2”

UPDATE from Arizona Senate Republicans, “Public update: pro-abortion protestors violently tried to enter our building. Members/staff/visitors evacuated to a secure location. Law enforcement intervened. Protestors dispersed. While the Senate is now secure & safe, unfortunately smoke/tear gas has spread into our chambers…Nonetheless, we are improvising and moving to another area of our building to finish the people’s work and finish voting on our final bills of this legislative session.”