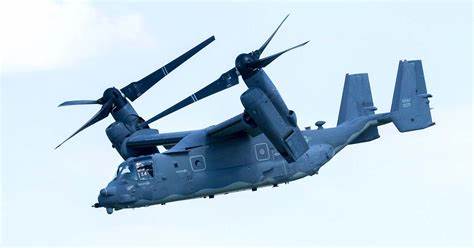 At least four people were killed when a Marine MV-22B Osprey crashed near a California highway Wednesday, according to a local report.

The Imperial County Sheriff’s Office said the incident occurred near Highway 78 and Coachella Canal Road. A federal source told the Los Angeles Times that five people were on the plane and four were dead.

This is the second military aircraft that’s crashed in California within the last week after a Navy pilot died during a training mission in Trona, California on Friday.

A spokesperson for the Marine Corps Air Station Yuma said that there was no nuclear material on Wednesday’s downed Osprey, refuting reports circulating on social media.

“Contrary to social media rumors, there was no nuclear material on board the aircraft,” said Captain Brett Vannier of the Marine Corps Air Station Yuma. “Information will be made available as we receive it.”

Both military and civilian first responders are at the site of the crash near Glamis, California, he said.

The aircraft belonged to the 3d Marine Aircraft Wing.

Lt. Richard Bullock, who was assigned to Strike Fighter Squadron (VFA) 113 based at Naval Air Station Lemoore, died in Friday’s crash. An investigation into that incident is ongoing.