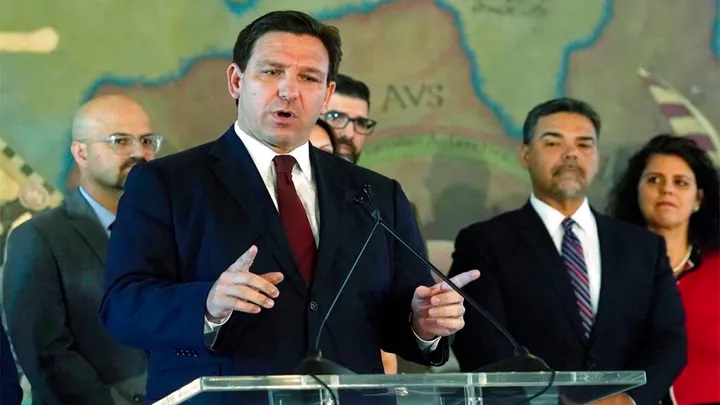 Florida Gov. Ron DeSantis condemned the Washington Post and “the legacy media” during a press conference on Wednesday in which he told them, “We don’t care what you think anymore.”

At an appearance in West Palm Beach, DeSantis was asked about a recent piece from the Washington Post that accused his press secretary Christina Pushaw of potentially violating the Foreign Agents Registration (FARA) Act by belatedly registering herself as a foreign agent for the former president of the country of Georgia.

DeSantis called the article a “smear piece” and said he was “not deterred” by the attempt.

“I am not deterred by any smear piece by these legacy media outlets. The only reason they’re attacking her is because she does a great job and she’s very effective at calling out their lies and their phony narratives,” he said.

He continued, “Whenever they’re smearing somebody, you know that person is over the target and they’re scared of them. I would be much more concerned with my press secretary if the Washington Post was writing puff pieces about her. Then I would think something was wrong.”

Pushaw’s attorney Michael Sherwin said in a statement obtained by Fox News, “Ms. Pushaw did volunteer work helping to advocate for former Georgian President Miikheil Saakashvili, a close ally of Ukrainian President Volodymyr Zelenskyy, and the need for free elections and democratic institutions in Georgia where she was living at the time.

“She was then paid for some of that work, totaling $25,000 over two years, which covered some of her living expenses. Her efforts included writing op-eds, reaching out to supporters and officials, and advocating on his behalf in Georgia and in the United States,” Sherwin explained.

“The work ended in 2020. Ms. Pushaw was notified recently by the DOJ that her work on behalf of Mr. Saakashvili likely required FARA registration. Ms. Pushaw filed for the registration retroactively as soon as she was made aware,” the statement concluded.

DeSantis also called out media for continuing to push hit pieces against his administration.

“I think what we need to understand is that these legacy D.C. and New York outlets – we don’t care what you think anymore. We know you peddle narratives. We know you lie. We know you don’t care about the facts. And so you can try to smear me or anyone in my administration all you want to. All that’s going to do is embolden us to continue moving forward for the people in Florida,” DeSantis said.

He concluded, saying, “I think it was a totally ridiculous attempted smear and it’ll have absolutely no impact on anything that we’re doing in our office.”

In a comment to Fox News, Pushaw said, “I am blessed to work for a leader who genuinely does not care what legacy media thinks about him, his agenda or his team. The point of FARA is transparency, and I’ve always been transparent and open about my experience working in Eastern Europe, which concluded months before I started working for Gov. DeSantis. As soon as I was told that I might be required to register, I worked proactively to complete the registration as soon as possible.”