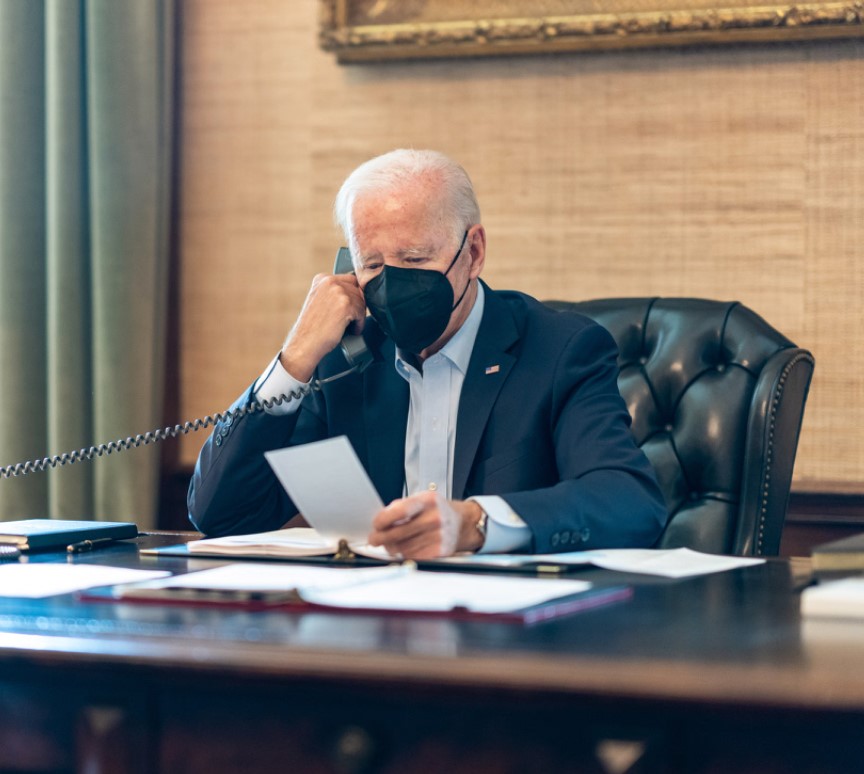 The White House lied to the American people Friday morning about Joe Biden’s condition after he was diagnosed with COVID on Thursday. White House COVID-19 Response Coordinator Dr. Ashish Jha, M.D., told the morning news shows on several networks that Biden had no changes in his symptoms as of 10 p.m. Thursday, specifically telling NBC’s Today Show Biden did not have a fever. Biden’s personal physician announced later Friday that Biden actually had a fever of 99.4 Thursday evening that was treated with Tylenol.

Jha was sent out to appear from the White House driveway on Today, ABC’s Good Morning America and CNN’s New Day. On each show Jha made clear he had not been given an overnight update on Biden since his last update at 10 p.m., but was insistent Biden had worked hard throughout the day and had no changes in his symptoms. The White House knew Thursday night Biden had been treated for a fever yet Jha was sent out Friday morning to tell the Biden administration’s lie to the American people about Biden’s condition.

“He did mount a temperature yesterday evening to 99.4° F, which responded favorably to acetaminophen (TYLENOL). His temperature has remained normal since then.”

Jha told Today, “Yeah, um, so, as of late last night he was feeling fine. I think his words, his exact words were, uh, and I, I talked to his team who, uh, had a conversation with him around 10 p.m. last night. His words were, “I’m feeling just fine.” Uh, he had a pretty uh, you know, kind of busy day, actually. I was gonna say he had a restful day but that’s actually not even true. He was in meetings most of the day, uh, making phone calls most of the day, uh, had a, had a pretty, uh, I think, relaxed evening. And, uh, I have not gotten a update this morning yet and I plan to speak to him later this morning. But as of about 10 p.m. last night he was doing well.”

When asked specifically by Today Show host Savannah Guthrie if there were any reports Biden had a fever, Jha answered, “No fevers. No change in symptoms. Again, the sort of dry cough, uh, the runny nose, those are his two main things that he was feeling yesterday.”

Jha told Good Morning America’s Amy Robach, “Yeah, good morning. Thanks for having me back. Um, you know, I checked in with his team late last night, uh, he was doing fine throughout the evening. Have not had a chance to check in with, with uh, folks this morning, I’m gonna have a conversation with uh, him directly myself this morning. But I can report that as of last night he was feeling fine. Same symptoms, still quite mild. Uh, and he worked all day yesterday, worked through the evening. Uh, you know, and uh, he, uh, as of about 10 p.m. last night he was feeling just swell, just fine.”

Jha told New Day, “The symptoms were basically the same. Again he’s got a little runny nose. Uh, he’s got a bit of a dry cough. Uh, he’s was feeling, you know, he worked all day yesterday. He was on phone call, he was on Zoom calls. Uh, worked through the evening. Uh, and as of 10 p.m. as I said when I talked to his folks, his medical team who had last seen him right around 10 p.m., or last talked to him right around 10 p.m. he said he was feeling just fine.

Note: After getting beat up by the press Thursday for showing a maskless Biden in proof of health posts of a photo and video, the White House released a photo Friday of Biden wearing a mask.