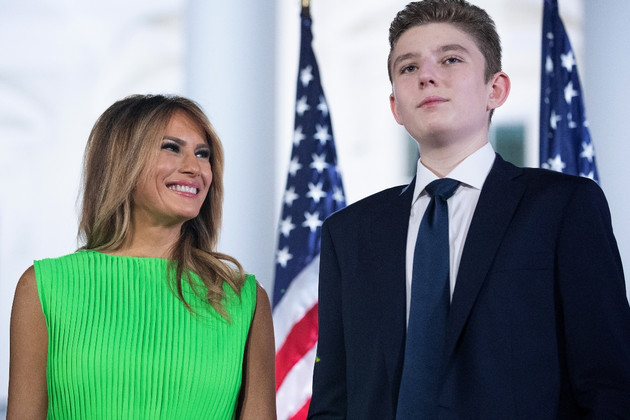 Former President Donald Trump’s youngest son Barron began trending on social media on Sunday as a picture showing his height circulated on the internet. Some leftists took the opportunity to insult the minor for his physical appearance.

One Twitter account with the handle @TheBarronTrump1 shared the photo on Sunday, and it showed Barron towering over another woman while wearing a suit and a pink tie. The photo had garnered over 29,000 likes as of Monday.

According to Snopes, the photo was originally taken during a Mother’s Day celebration in May 2021, but it gained widespread social media attention on Sunday.

Some people were quick to congratulate the Trump family for having a healthy son, including author and Foundation for Liberty and American Greatness president Nick Adams.

“President Trump should be incredibly proud of his youngest son, Barron Trump,” Adams wrote. “He’s a VERY tall young man who looks more and more like his father with each passing day.”

“Since Barron Trump is trending, I will say this,” Scott wrote. “That kid is COOL as heck, and STRONG as heck too. #MyBuddy”

Sadly, some on the far left decided to use the moment to mock Barron Trump and his family.

“Barron Trump keeps growing in an effort to get further away from his dad,” one user mocked.

Meanwhile, another leftist user declared he had no issue insulting the minor without a particular reason to do so other than his family name.

“Barron Trump is a pre-scumbag,” the user wrote. “He’s not off limits, since Chelsea Clinton and Sasha and Malia Obama weren’t off limits. How do I know he’s a pre-scumbag? Easy – mom’s a tone-deaf mail-order bride, dad’s a scumbag soon to be in jail, and none of the other kids are decent humans.”

Barron did nothing to deserve this level of mocking. The fact that he is tall and had his picture taken should not open him up to ruthless mocking from the left, especially before he even becomes an adult.

From the start of Trump’s presidency, Barron Trump was the subject of inappropriate and disheartening attacks from the left. During Trump’s inauguration in January 2017, “Saturday Night Live” writer Katie Rich tweeted that Barron would be “this country’s first homeschool shooter,” USA Today reported.

Rich was suspended after the tweet, but she returned to the show later that year according to TV Guide.

No matter how one feels about Donald Trump, it is not appropriate to attack his 16-year-old son, who is obviously not involved in policy decisions. Criticizing politicians for their decisions is fine, but attacking their young children crosses the line.

Behar: GOP ‘Has Become the Party of Insurrection, Revolt and Violence’