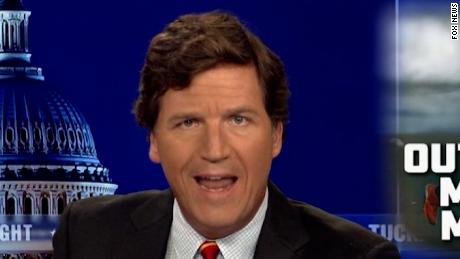 Friday, FNC host Tucker Carlson criticized Democrats and like-minded members of the media for their reaction to Friday’s announcement of the ruling in Dobbs v. Jackson Women’s Health Organization, which overturned the long-standing 1973 Roe v. Wade case which legalized abortion on demand. Carlson contrasted the reaction to the January 6 findings to that of the high court’s majority opinion and declared the true objective for Democrats was power.

CARLSON: After nearly 50 years, the single shoddiest most destructive Supreme Court decision in American history has finally been struck down. Roe v. Wade was overturned this morning by a six-three majority.

FOX NEWS REPORTER: The decision is out it’s been issued by Justice Alito and Roe v. Wade, according to our reports from the US Supreme Court and our own Shannon Bream is that Roe v. Wade has been overturned and the question of abortion has been returned to the states.

CARLSON: So pandemonium ensued immediately and the headline of The Babylon Bee, “Democrats pause January 6 hearing to call for insurrection.” And that’s basically true.

But from a legal perspective, which is what matters. There is nothing surprising about today’s decision. It was only a matter of time before Roe v. Wade was overturned. That’s been obvious for decades, even Democrats once acknowledged it.

Roe was one of those decisions you never heard anyone defend on its own terms. Lots people want legal abortion, but no one has ever explained how exactly the Constitution guarantees that.

Roe was a political document, it was not a legal opinion, and for that reason, its existence degraded and undermined the legitimacy of the Supreme Court, one of our country’s central institutions. It was poison.

If you cared about democracy and wanted democracy to continue, you would demand that all laws in the United States be passed by elected legislatures. Again, no matter how you feel about abortion or any other specific issue.

That’s not shocking. That is how our system is supposed to work, not being a monarchy and all.

So what’s the argument against this? Well, there isn’t one really. And we know that for certain from the dissent in today’s Supreme Court ruling. The three Justices who objected don’t even bother to make a legal argument in favor of keeping Roe v. Wade. Instead, they throw an embarrassing little tantrum.

At one point, Kagan, Breyer, and Sotomayor warned that the highly diabolical Clarence Thomas actually plans to ban interracial marriage.

Clarence Thomas, against interracial marriage. And then of course, there’s lots of huffing about something called bodily autonomy, which actually we are strongly in favor of, though it’s not clear how that applies to abortion, which affects two bodies.

But in any case, these same bodily autonomy, people are the very same Justices who just voted to uphold mandatory vaccinations for millions of Americans, thus violating their bodily autonomy, so much for that argument. Not that it stopped Justin Trudeau of Canada where abortions are legal until the moment of birth.

Today Trudeau wrote this, “The news coming out of the United States is horrific. No government, politician, or man should tell a woman what she can or cannot do with her body.” Suddenly, women are the only ones who get pregnant, you’ll notice.

Canada is a country, by the way, under the leadership of Justin Trudeau that prevented unvaccinated citizens from traveling within their own country. They had mandatory vaccinations. Justin Trudeau was perfectly happy to tell the women of Canada what to put in their own body.

So you’re beginning to see why precisely zero people throwing tantrums today have bothered to explain the law or the principles that supposedly underlie Roe v. Wade, not one of them. Instead, they’re yelling, as they always do, suspending the January 6 hearings to start an insurrection, and that would of course include Joe Biden. Here he is.

JOE BIDEN (D), PRESIDENT OF THE UNITED STATES: It was three justices named by one President, Donald Trump, who are the core of today’s decision to upend the scales of justice and eliminate a fundamental right for women in this country.

Make no mistake, this decision is a culmination of a deliberate effort over decades of set balance of our law. It’s a realization of an extreme ideology and a tragic error by the Supreme Court, in my view.

CARLSON: Notice that it is abortion that is the red line for them, abortion, of all the issues, why is that so important to them? It’s obvious why it’s so important to America’s corporations. Almost all of whom immediately weighed in to say, we will fly you to get an abortion at the state of your choice. Why? Well, of course.

Employees without families are loyal to the company. And of course, it’s much cheaper to pay for an abortion than it is to pay for a maternity leave or an extra name on the insurance policy.

So it’s all about the money for corporate America, it always is. Families are bad for big corporations, therefore they’re against families.

This particular ruling dramatically reduces the power of unelected judges to dictate the details of the lives of millions of Americans and returns that power to voters, voters get to decide how they want to live. That’s an extreme ideology that upsets the balance of power somehow? We thought that was the whole premise of our system. We thought that was democracy.

And yet, the very people who’ve been lecturing us for years about democracy, the end of democracy are horrified by the return of democracy.

They’re telling us, the legitimacy of our institutions is at risk. And yet, they cannot allow voters to have a say in how they live. What does that tell you? It tells you they care about power, not popular support.

They are afraid to put their ideas to the test of a vote, and that’s why the Justice Department, which no longer dispenses justice, instead, it works on behalf of the Democratic Party allowed thugs to gather outside the homes of Supreme Court Justices for the last several weeks in violation of Federal law in an effort to intimidate them into not doing what they did today.

And that’s why today, you saw several elected Members of Congress call for insurrection. That would include Sandy Cortez of Westchester. It would include, as always, Maxine Waters of Los Angeles, this is not the first riot she’s called for. She once again threatened violence against Supreme Court Justices, because they came down with an opinion she doesn’t agree with, and that she promised to defy the Court’s ruling. How is this for defending our institutions? Watch.

REP. MAXINE WATERS (D-CA): You this turnout here? You ain’t seen nothing yet.

Women are going to control their bodies, no matter how they try and stop us. The hell with the Supreme Court. We will defy them. Women will be in control of their bodies and if they think Black women are intimidated or afraid, they’ve got another thought coming.

CARLSON: “To hell with Supreme Court,” Roberta Mugabe there. “We will defy them.” Really? You will defy our core institution after sending people to prison for questioning the last election. Is that what you’re saying?

Don’t lecture us ever again about the sanctity of our institutions, about our norms, because you clearly don’t care about them — at all. What you care about is power.

ESCALATING!! Pro-choice Protester On Bridge For Over 24 Hours

Liberals Turn Against Liz Cheney After Her Statement!!