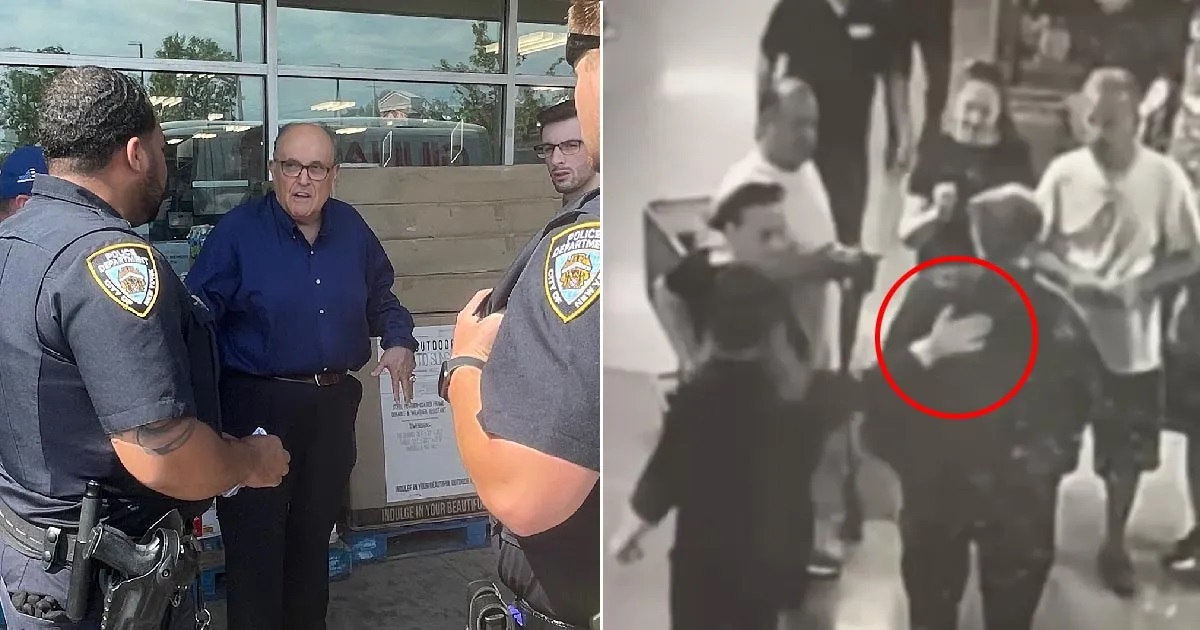 Rudy Giuliani was slapped by a worker at a ShopRite on Staten Island on Sunday while campaigning for his son, leaving the 78-year-old former New York City mayor shaken, the ex-pol told The Post.

Giuliani said he had just gotten out of the men’s room at the store on Veteran’s Road and was being greeted by a bunch of supporters when he was suddenly hit from behind — an incident caught on surveillance video obtained by The Post.

“All of a sudden, I feel this, ‘Bam!’ on my back,” Giuliani said. “I don’t know if they helped me not fall down, but I just about fell down, but I didn’t.

“I feel this tremendous pain in my back, and I’m thinking, what the — I didn’t even know what it was,” he said. “All of a sudden, I hear this guy say, ‘You’re a f–king scumbag,’ then he moves away so nobody can grab him.

“And he says, ‘You, you’re one of the people that’s gonna kill women. You’re gonna kill women,’ ” Giuliani said, quoting the suspect, who now faces assault charges. ” ‘You and your f–king friend are gonna kill women.’ Then he starts yelling out all kinds of, just curses, and every once in a while, he puts in that woman thing.

“The Supreme Court made a decision,” Giuliani said. “You don’t go around attacking people because of it. I mean, go get it changed.”

The ex-mayor told ABC the slap felt like “somebody shot me,” and, “Luckily, I”m a 78-year-old who is in pretty good shape.

“If I wasn’t, I would have hit the ground and probably cracked my skull.”

The former federal prosecutor told The Post he felt it was his duty to call the cops — likening the decision to his tough-on-crime policies as mayor.

“I say to myself, ‘You know something? I gotta get this guy arrested,’ ” he said. “I talk about ‘broken windows’ theory all the time. You can’t let the little things go.

“I’m like, ‘I’m gonna get this guy arrested as an example that you can’t do this. And I said, also, in New York, we don’t prosecute people anymore And one of the reasons I brought crime down is I didn’t ignore stuff like this.”

“He’s doing fine,” Andrew said. “But it’s a sad day when New Yorkers’ greatest crime fighter, ‘America’s Mayor,’ is attacked. I blame the left-wing for encouraging violence. This is crazy.”

He said his father was in good spirits and even quipped that ” ‘I ran into the only person who is not voting for Andrew Giuliani.’

Witness Rita Rugova-Johnson told The Post she was “stunned” to see the attack.

“I was shoulder-to-shoulder with Rudy inside ShopRite,” Rugova-Johnson said. “We’re talking, and all of a sudden an employee came out of nowhere and open-handedly slapped him in the back and said, ‘Hey, what’s up scumbag?’

“[The attacker] was on duty at the time,” the witness said. “The cops arrested him.”

Sources said police took the assailant into custody at the store.

The suspect, a 39-year-old from Staten Island, will be charged with second-degree assault involving a person over age 65, law-enforcement sources said. The man has no prior arrests, sources said.

Cops were called to the supermarket shortly before 3:30 p.m., sources said.

“Rudy was assaulted,” his WABC radio partner, Dr. Maria Ryan, told The Post. “He’s a 78-year-old man with a bad back and bad knees.”

Joe Biden Slurs Through Speech with G7 Leaders, Says Another Pandemic is on the Horizon (VIDEO)