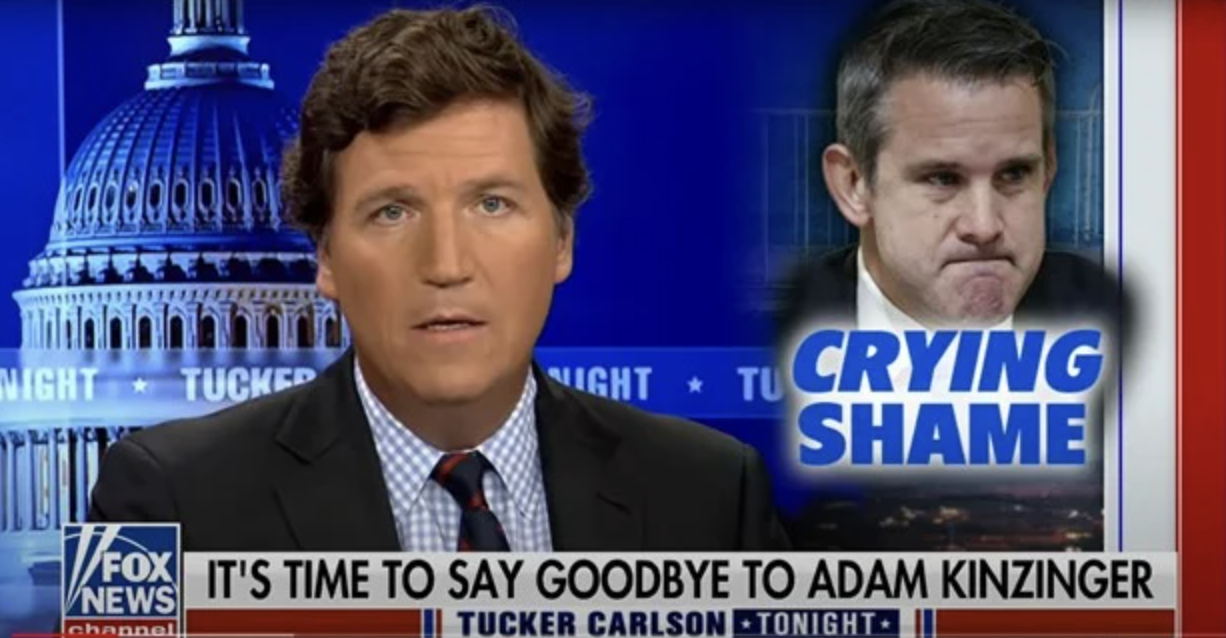 The Gateway Pundit has written several stories over the past two years highlighting the amusing meltdowns of castrated Never-Trumper Adam Kinzinger. On Friday night, Tucker Carlson gave a farewell address for the ages for the outgoing congressman using his trademark sardonic humor.

Kinzinger was the most pathetic Republican member in Congress (yes, even worse than spoiled warmonger Liz Cheney). What made his continued crybaby antics even sadder is they continued even after his Democrat “friends” eliminated his congressional district, ending his political career.

Here is the tour de force by Carlson in all its glory:

Some of the best quotes from the video:

“The first signs were subtle but unmistakable: choking up at a car insurance commercial, opening an Instagram account and posting pictures of himself, wearing spandex bike shorts to Starbucks without shame and sometimes, with a fanny pack.”

“By 2021, Kinzinger had a full-blown case of male menopause with all the familiar, painful symptoms: mood swings, hot flashes, food cravings, uncontrollable weeping.”

“A lesser man would have retreated from public life, chosen new pronouns and transitioned in private, but Adam Kinzinger chose another path. He chose to be a role model. He wanted other middle-aged men to know there is life after hormonal imbalance, and so on July 27, 2021, Adam Kinzinger bravely came out of the closet as a weepy man. You may remember the moment.”

“Here’s a man who has no control of himself at all, so we’d better put him in charge of important things. Kinzinger quickly became regarded as an essential voice on foreign policy. When the world hangs in the balance, you want a guy who cries a lot.”

“Kinzinger made that clear the other day when he responded personally to a Twitter account called “Catturd” because when you’re one of Washington’s leading authorities on foreign policy, you spend a lot of time on Twitter reading accounts with names like “Catturd.”  (Jim Hoft covered this in November)

“Adam Kinzinger will live forever in our hearts as an example of what a man can be when he stops trying to be a man and unleashes the emotionally fragile divorced single mom within.”

The great Tucker Carlson did miss a few of Kinzinger’s most pitiful moments but Gateway Pundit has him covered:

Kinzinger actually thought the “Ghost of Kyiv” was real rather than an elaborate fairy tale.

He compared MAGA Republican Lauren Boebert to the Taliban.

The whipped RINO said Trump supporters “will be ashamed of their parents.”

Kinzinger even called some men “unmanly” despite bawling like a baby on national TV.

May Tucker’s monologue prove the most indelible memory people have of Kinzinger going forward. He deserves nothing less.