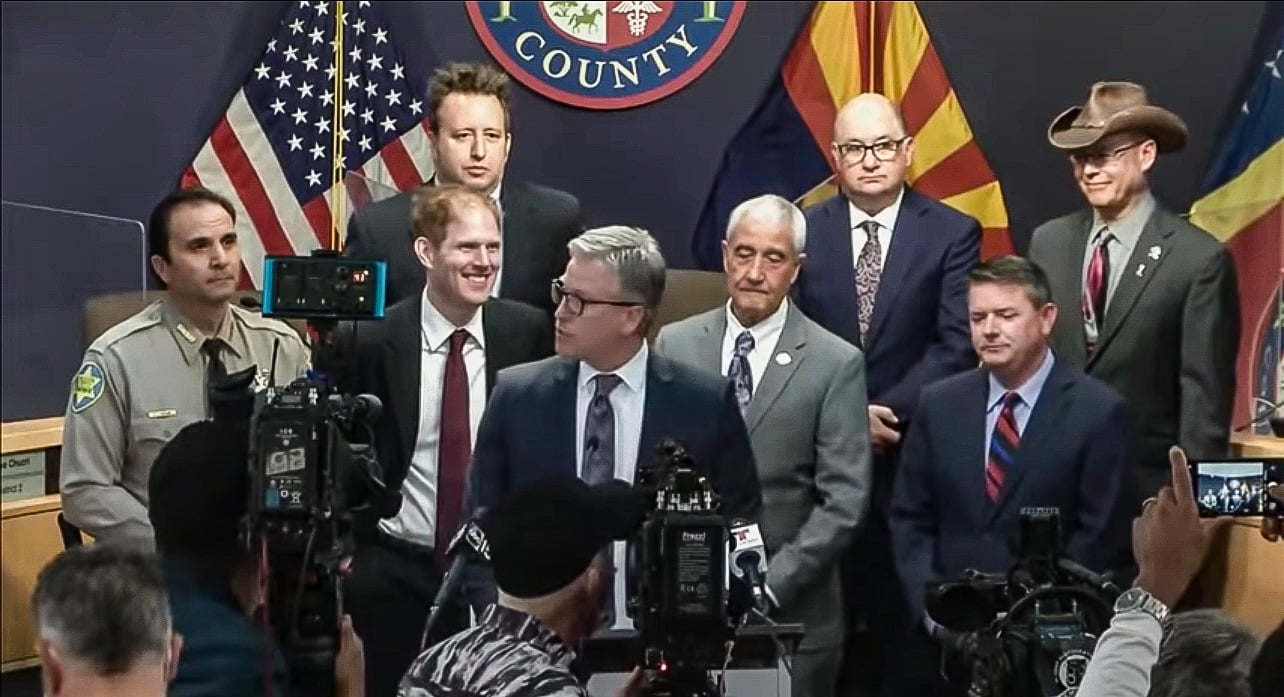 TGP is suing Maricopa County after they restrained our First Amendment rights and threatened The Gateway Pundit correspondent Jordan Conradson and Real America’s Voice correspondent Ben Bergquam with arrests for standing on public property and attempting to peacefully attend an election press conference.

The Gateway Pundit reported that Jordan Conradson and Ben Bergquam were physically removed from the Maricopa County presser on Thursday afternoon. Drones began tracking and following them after they were escorted off the public land.

In October, The Gateway Pundit reported that TGP correspondent Jordan Conradson was blocked from access to Maricopa County’s election-related events in a clear effort to silence this news organization and stop us from reporting on election discrepancies in Maricopa County.

Yesterday morning, Ben Bergquam was deported from the county presser.

Earlier today, Bergquam also received a bs email denying him access to Maricopa County, claiming that he is “not a bona fide correspondent.”

Leaving the presser did not stop Maricopa County Sheriff’s deputies from harassing and nearly detaining Bergquam and Conradson in the parking lot located on public property.

The reporters never trespassed from the property, but the Sheriff’s deputies and the Maricopa County PIO (Public Information Officer), Ron Coleman, claimed they were.

Coleman told Jordan and Ben, “You can go to the free speech zone and protest if you want to.”

The Maricopa County officials do not want any trusted journalists in the building. They only want leftist and lapdog media in their pressers as they slow-walk the election process in Maricopa County.

We reported earlier that Maricopa County is expecting to count through the weekend and likely next week.

However, before this altercation, The Gateway Pundit sent a cease and desist letter to Maricopa County yesterday demanding that they allow our correspondent, Jordan Conradson, to attend the presser.

The Gateway Pundit’s attorney John Burns shot off the following cease and desist letter via email and FedEx to the Maricopa County Elections Department and Maricopa County Recorder Stephen Richer on Thursday, calling the decision to censor Conradson a “text-book impermissible content-based prior restraint of speech.”

The letter states, “On behalf of my clients, I demand that you immediately cease this outrageous conduct and permit my clients to access the press conferences of the ‘Elections Command Center.’ If you do not do so immediately, then we will be filing a civil rights lawsuit pursuant to 42 U.S. § 1983 for injunctive relief and damages under the First and Fourteenth Amendments to the United States Constitution.”

The Number of GOP Seats in the House Is Dwindling? Will the Dems Steal the House Too?