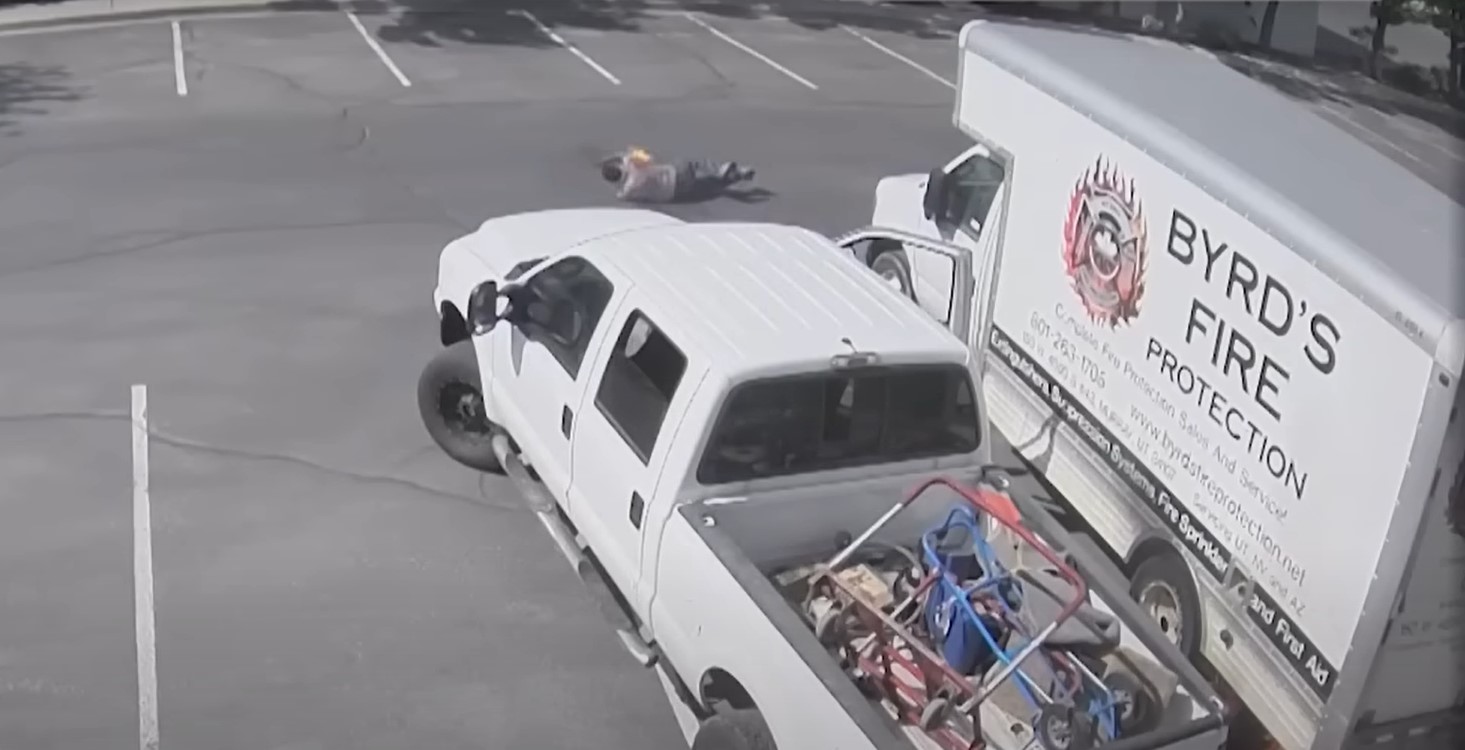 Shocking footage shows the moment a gas thief suspect caught on fire as he was allegedly attempting to drill a hole in a truck’s fuel tank outside a Salt Lake City small business.

The incident occurred June 11 before 10:00 a.m. in front of the Summit Fire and Protection building, KSL TV reported. The company’s truck already had its fuel tank siphoned and catalytic converter stolen before the suspect arrived. It is unknown if the same thief was part of the previous fuel theft from the truck.

Surveillance video captured the suspect underneath the vehicle while another alleged accomplice sat nearby in a white pickup truck.

After the man’s shirt caught on fire, he frantically came out from underneath the truck to stop, drop, and roll, the video shows. After the fire appeared to be put out, the alleged accomplice drove up beside the suspect, who hopped in, and the pair drove away.

Travis Mills, who is a branch manager of Summit Fire and Protection, told KSL TV that as the thief’s attempts to siphon the gas failed, he attempted to “drill the gas tank,” which caused him to catch fire.

“The reason why he’s fleeing is that, if there were more gas in it than a gallon, this thing would have absolutely turned into a bomb,” Mills said. “It’s sad because times are tough for a lot of people, but it’s not worth the $5 that he would have saved for the the [sic] injury that the guy sustained.”

Mills also told the outlet that his company had previously installed a $30,000 security system because numerous catalytic converters had been stolen from their vehicles during other smash-and-grab thefts.

Tony Allred, division chief of Fire Prevention for the Salt Lake City Fire Department, told KSL TV that drilling into a gas tank should not be tried by anyone with the expertise to do so, as his hazmat team only does so in emergency circumstances with the proper precautions.

“The drill, the drill bit, or even static electricity could spark an explosion,” the outlet noted.

As Breitbart News has documented, gas theft has become a common occurrence across the country amid the nationwide crisis of rising fuel prices.

This past week, authorities in California released surveillance footage of thieves who allegedly drilled into a gas tank.

Earlier this month, Florida authorities were on the lookout for two men who “stole almost 1,100 gallons of fuel from a Florida gas station.”

The national average for gas prices is currently at $5.00, according to the American Automobile Association, and has remained above $5.00 for seven consecutive days.