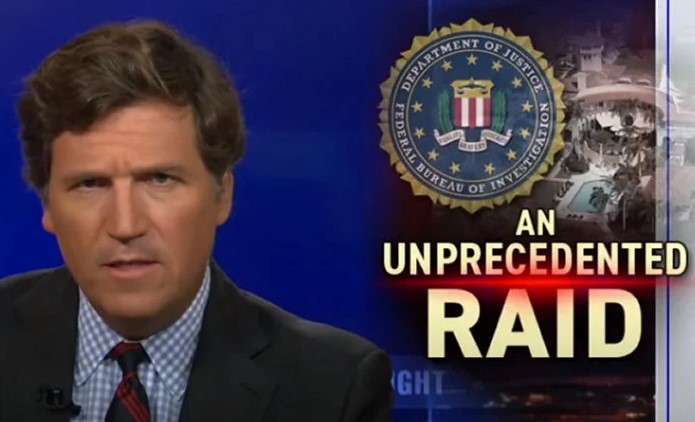 He came back on Monday night and boy did he have a lot to say.

In a monologue for the ages, Carlson absolutely blasted the FBI, the DOJ and the Biden administration for the weaponization of law enforcement in politics and so much more.

Nuclear secrets? If the Biden administration really believed that, if they really thought Donald Trump possessed documents that posed an imminent danger to American national security, then you have to wonder, why did they wait a year and a half to do anything about it?

Why did they wait till 90 days before a midterm election, an election that polls suggest they will lose? It doesn’t make, oh, wait, actually, it does make sense.

In fact, the question answers itself. Despite superficial appearances, the raid of Mar-a-Lago was not an act of law enforcement. It was the opposite of that. It was an attack on the rule of law. It was a power grab.

As Matt Boose put it recently, in American Greatness, the raid on Trump’s home “was exactly what it looks like, a show of force against the opposition leader by the head of state and his personal bodyguards. If this happened in, any other country would immediately be denounced as the act of a dictator.”

That’s true, but it’s hard to hear those words anyway. As an American, you don’t want to believe it and yet here are the essential facts. The same week the Biden White House announced that Joe Biden will definitely seek a second term as president, the same week, the Biden Justice Department launched an armed raid against Biden’s main rival in that same presidential election.

That’s what happened. Pause for a minute. If The New York Times told you that something like that was going on in Chad or the Gambia, what would your reaction be?

You’d probably say to yourself, “Thank God I don’t live in a place like that, a country where politicians used armed men to cling to power.” Oh, but you do live in a country like that. You do. The evidence is all around us. We just don’t want to see it.

Watch the whole thing below:

Millions of Americans are disgusted by what they see happening in the country right now.

Things need to change and fast.

DOJ Is Returning Documents Back To Mar-A-Lago!! THIS IS BIG!!