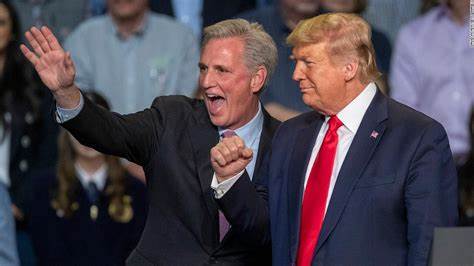 “In Congress, Kevin is a tireless advocate for the people of Bakersfield and the Central Valley. He is working incredibly hard to Stop Inflation, Deliver Water Solutions, and Hold Joe Biden and Nancy Pelosi Accountable for their catastrophic failures and dereliction of duty,” Trump wrote on Truth Social. “Kevin McCarthy has my Complete and Total Endorsement.”

In April, a secret recording of Kevin McCarthy on a call with Liz Cheney and other House Republicans, the Minority Leader told Cheney that he would counsel Trump to resign back on January 10, 2021 was leaked to MSNBC.

“I think [impeachment resolutions] will pass, and it would be my recommendation you should resign,” McCarthy said he would tell Trump before further adding, “what he did is unacceptable. Nobody can defend that and nobody should defend it.”

In May, another audio of McCarthy discussing the 25th Amendment with House Republicans was leaked to the media.

“What the president did was atrocious and totally wrong. From the standpoint, we’re 12 days away – I mean the one point I’d make with Biden – if you have an impeachment and you’re stuck sitting in the senate and he needs cabinet members, he’s got Secretary of Defense, he’s got a lot of things he’s got to have moving….” McCarthy said.

McCarthy also said he wanted to reach out to Biden and have him meet with Trump.

“I do think the impeachment divides the nation further and continues the fight even greater. That’s why I want to reach out to Biden. I wanted the President to meet with Biden — that’s not going to happen,” McCarthy said.

“[The 25th Amendment] takes too long. It could go back to the House, right?” McCarthy asked his aide John Leganski.

As he was announced, the crowd chimed in with a loud chorus of boos.