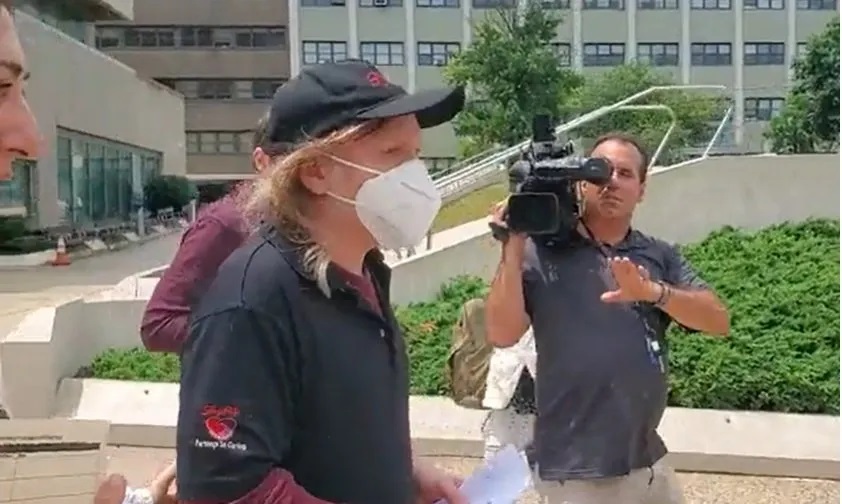 The supermarket worker who slapped Rudy Giuliani on the back before calling him a “f-cking scumbag” has been released from jail after the charges against him were downgraded.

Daniel Gill, 39, was released on Monday while still wearing his ShopRite uniform — as he was arrested on Sunday at his job.

Gill was caught on surveillance camera slapping the 78-year-old former New York City mayor on the back.

“It appears to be a tap on the back and not a slap,” Gill’s defense attorney, Susan Platis, argued during the arraignment, according to a report from the New York Post.

Platis added, “this is not criminal contact, it is very unlikely that the touch could have caused any injury. So to call this assault in the third, or even menacing, is a stretch.”

“The defendant smacked Mr. Giuliani in the back, causing him pain and imbalance. [Giuliani] took a step forward to steady himself … at which time the suspect said to him, ‘What’s up, scumbag,’” Assistant District Attorney Darren Albanese countered.

Giuliani slammed the decision to lower the charges during a virtual press conference ahead of the arraignment. He said, “finally, I thought we had a DA in New York in Staten Island who was a real DA in favor of protecting victims and not letting criminals go free.”

The former mayor called for Gill to be locked up, asserting that he could have been killed if he was knocked to the ground and hit his head.

Gill did not answer questions from the media as he walked away with his lawyer.