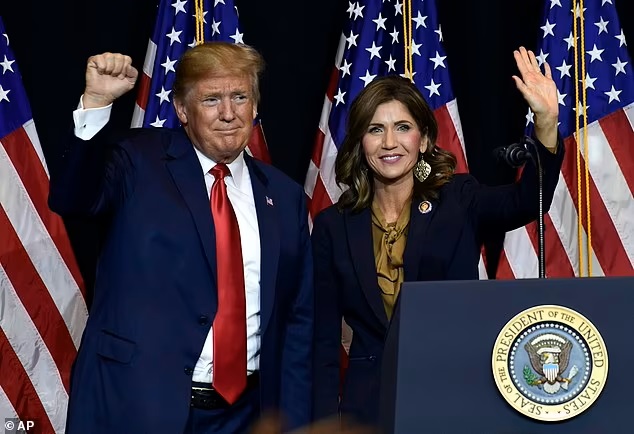 The South Dakota Republican is running ads in Iowa, New Hampshire and South Carolina and nationally on Facebook, fueling speculation of a 2024 White House run.

The ads highlight her decision to defy COVID restrictions and keep businesses and churches in South Dakota open during the lockdown, maintain a strong economy in the state during the pandemic and the increase of families moving to the heavily red state.

‘South Dakota has the best economy in the nation. We’re No. 1 in tourism and more families are choosing to make our state home than ever before,” Noem says in the latest ad.

“But what’s sparking 2024 presidential speculation is less about what’s in the ads than where they’re being viewed,” Fox News reports:

Among the states where the ads are getting clicks are Iowa, New Hampshire, and South Carolina, the first three states to hold contests in the Republican Party’s presidential nominating calendar.

Political pundits view Noem, who’s a strong supporter and ally of former President Donald Trump, as a potential Trump running mate if the former president launches another White House run in 2024. And they see the conservative governor as a presidential contender if Trump decides against seeking the White House again.

A month ago, Noem told Fox News’ Brian Kilmeade when asked about 2024 that “people bring it up enough that you have to have thought about it.”

Asked about the new digital ads, a source close to Noem told Fox News “Gov. Noem proved in South Dakota that conservative principals work. Some talk conservative while others govern that way, and that’s why South Dakota has the best economy in the nation and one of the fastest population growths.”

“He had America right were we would we needed her. His policies were right. So I’m counting on him running,” she said during a trip to Iowa on Saturday.

Other GOP governors with two-term limits including Arkansas Governor Asa Hutchinson and Maryland Governor Larry Hogan are reportedly considering a run in the next presidential contest. Neither of the potential 2024 candidates are supporters of the former president.

Anticipation continues to build around President Trump’s expected run for president in 2024.

“Look, I feel very confident that, if I decide to run, I’ll win,” told the Intelligencer in an interview published Thursday.

“The only question left in the former president’s mind is when he’ll announce,” the publication notes.