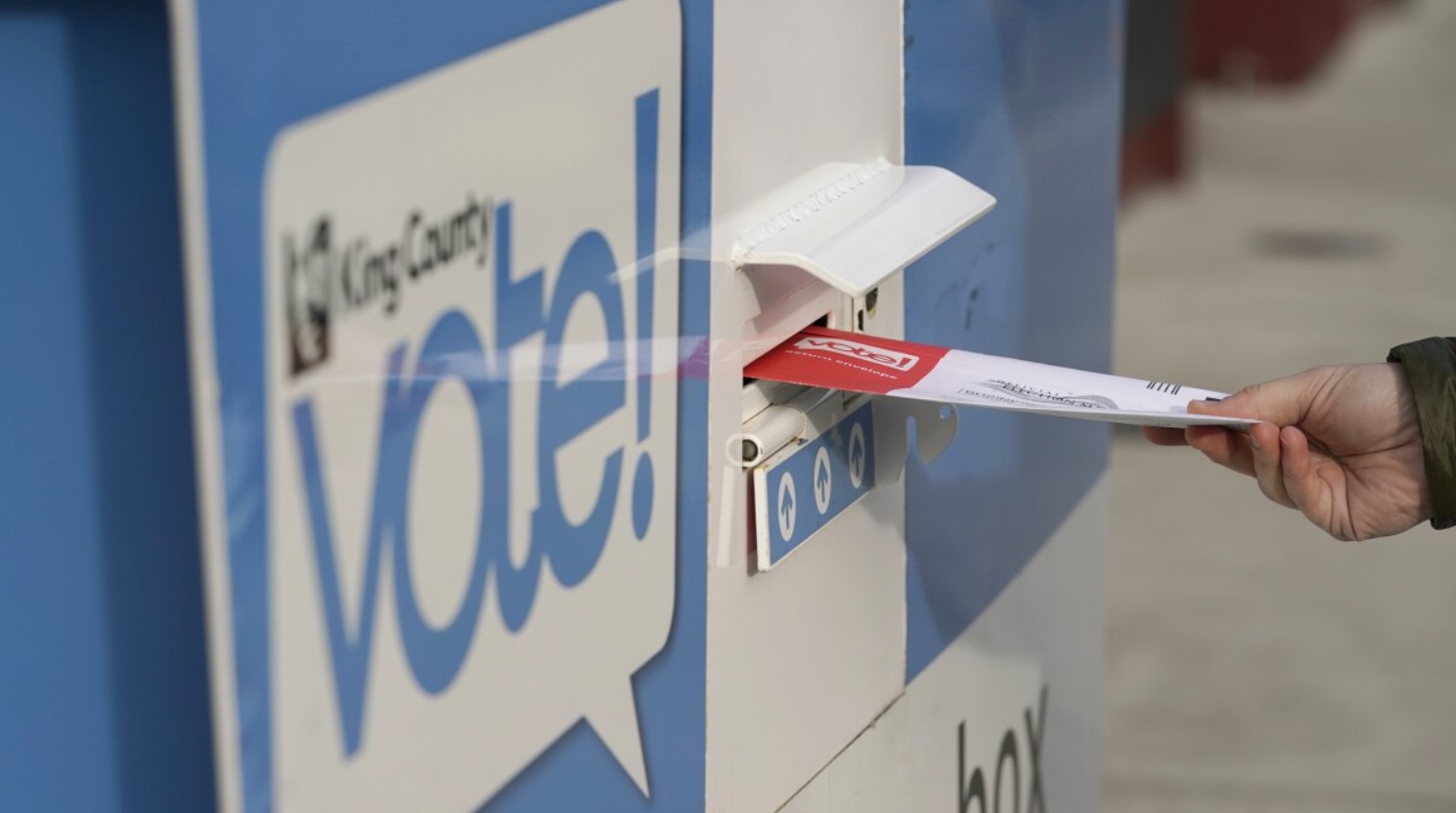 As midterm voting kicks into high gear, Republican activists in Washington are organizing surveillance of ballot drop boxes, generating complaints and concern from some elections officials.

Over the weekend, signs were posted near ballot boxes in several Seattle-area locations, with red letters warning the boxes are “Under Surveillance” and stating that accepting money “for harvesting or depositing ballots” may violate federal law.

A scannable code on the signs pointed to a section of the King County Republican Party website with a form encouraging people to submit “election incident” reports, including photos and video.

Meanwhile, a group calling itself “WA Citizens United to Secure Ballot Boxes” is promoting drop-box surveillance statewide, encouraging people to sign up to watch ballot boxes and record video of people “dumping an in ordinate [sic] amount of ballots” and “taking pictures of themselves doing it,” according to the organization’s “Drop Box Watch” website.

The signs in King County were spotted near at least two ballot boxes in Seattle on Sunday, at the Lake City and Broadview branches of the Seattle Public Library.

King County Elections spokesperson Halei Watkins said the office received several reports about the signs popping up over the weekend near Eastside ballot boxes, including in Issaquah and Redmond.

While it is legal for people to observe the county’s 76 ballot boxes, which are located on public property, the message on the signs has raised concerns about possible intimidation. Watkins said King County Elections has notified the County Prosecutor’s Office “to check on the legality” of the effort.

“Certainly the signs out at the drop boxes are a little bit worrying,” Watkins said.

Thurston County Auditor Mary Hall, a Democrat, said she’d been alerted to the statewide surveillance effort and doesn’t understand what the people running it expect to prove. “I’d characterize it as voter intimidation,” she said.

Unlike some other states that limit the practice, Washington law allows people to drop off legal mail-in ballots for other voters with no restrictions.

Family members often drop off ballots for one another, Hall said, but it’s also legal for groups to hold “ballot parties” and collect a bunch of votes to turn in together. The ballot signatures are all checked before being counted to ensure the votes are legal, she noted.

Mathew Patrick Thomas, chair of the King County Republican Party, said in an interview Monday morning he had not been aware local GOP volunteers were placing the signs near ballot boxes until he got a call over the weekend from King County Elections Director Julie Wise.

Thomas said he called Amber Krabach, a GOP activist and candidate who has helped lead the King County Republicans’ election integrity committee, and said, “You guys have got to stop doing this.” Thomas said he wanted to ensure the signs were at least 25 feet away from drop boxes.

Thomas said the “self-appointed committee” — created by Joshua Freed, his predecessor as chair — was acting “outside of its authority” and “without the express knowledge, permission or consent” of the King County GOP.

“As KCGOP Chairman, I was not consulted regarding this activity and was not made aware of it until I was contacted separately by the Director of King County Elections, Julie Wise and media,” Thomas said.

He also sent Krabach a “cease and desist” order demanding the signs be removed and ending any further actions linking the surveillance efforts to the King County GOP.

In a phone interview Monday, Krabach said the signs had been placed by volunteers “to act as a deterrent” to anyone getting paid to deliver ballots. “If they are legally dropping ballots into the box, then the sign shouldn’t bother them.”

Asked how the ballot boxes might get watched, Krabach pointed to volunteer observers, and said there also has been discussion of setting up video cameras to record activity at the boxes.

“I think in Washington we have zero ability to verify that our elections are secure and have integrity,” Krabach said.

Krabach is running for the state Legislature this year as an “Election Integrity Party” candidate. She previously ran unsuccessfully as a Republican. On social media, she has spread misinformation about the 2020 election and COVID-19 vaccines, and promoted QAnon, the conspiracy theory that a secret group of elite satanic pedophiles secretly runs the world. (Krabach in the interview said the media has misconstrued QAnon and that the movement has nothing to do with her election activism.)

It is not clear who exactly is behind the statewide effort to watch ballot boxes. The Drop Box Watch website does not state who is running it, though it appears motivated by ex-President Donald Trump’s lies that he lost to Joe Biden due to fraud.

The group’s website points to the film “2000 Mules,” by conservative activist Dinesh D’Souza, which falsely claims to have proved Biden’s victory in the 2020 election was due to an illegal ballot box stuffing scheme.

A FAQ on the website states that observers have a right to legally carry firearms while watching ballot boxes, but recommends “you only do so if you have a concealed-weapons permit or otherwise hide it from open view (legally!).”

The website has been promoted by Krabach and Tamborine Borrelli, an America First Republican candidate for secretary of state who has sued several county elections offices alleging widespread voter fraud. Borrelli and an attorney were fined $28,000 by the state Supreme Court in June for making legally frivolous claims.

In response to an email seeking comment sent to the website’s contact email address, a person who did not give their name said the effort is “a collaboration of citizens both on the left and the right” which seeks “to ensure that our legalized ballot harvesting rule is not abused by those who seek to stuff the ballot box.” The person added: “every dropbox in the state is being surveilled.”

The drop box watching effort in Washington is similar to national campaigns by conservative activists.

The group behind the “2000 Mules” film, True the Vote, recently announced plans to work with a far-right Constitutional Sheriffs and Police Officers Association to surveil drop boxes across the country, noted Devin Burghart, the Seattle-based executive director of the Institute for Research and Education on Human Rights, in a series of Twitter posts on Monday.

The organization also has filed records requests seeking surveillance video from several county elections offices in Washington. “All of this is to insidiously chip away at the trust in elections and intimidate votes,” Burghart wrote.

While Trump and his allies have intensely attacked the expanded use of ballot drop boxes in the 2020 election, claiming they invited fraud, an Associated Press survey of Republican and Democratic state election officials across the U.S. found no cases of fraud, vandalism or theft that could have affected the results.