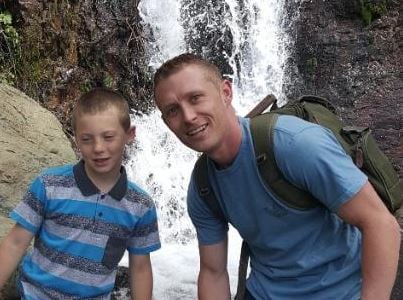 “You have a megaphone. You need to tell people the plans. We are going inside,” Ray Epps allegedly told a protestor on Constitution Avenue on January 6th.

This protestor was J6 defendant Sean Michael McHugh. McHugh has sat in DC Gitmo for over a year now in inhuman conditions while Ray Epps roams free.

McHugh is a father of four and a California business owner, detained for 427 days in DC’s Gulag. McHugh faces two misdemeanors, eight felonies, loss of licensure and decades in prison.

Sean McHugh wrote a tell-all letter about his experience meeting Ray Epps and the observations he made of the notorious man. See his letter to The Gateway Pundit below from his cell in DC Gitmo detailing his repeated encounters with Ray Epps and the burning question:Why has Epps evaded charges when those who did far less have been charged with so much more?

I’m a January 6th political prisoner being held in the DC-Gulag. My name is Sean McHugh. I’m being held in very inhumane conditions in the DOJ’s effort to try and make me plead guilty under duress. I believe they are trying to do this because I had direct contact as seen on video with Ray Epps, an individual who has been reported by multiple media sources to possibly have FBI connections and involvement for incitement. At the very least he appears to be a government cutout protected by a lawyer who was formally known as an employee of the FBI. In fact, the FBI has covered for him by scrubbing his name from the most wanted list for January 6th after real journalism exposed his identity.

I encountered Ray Epps, the real de facto leader of January 6th 2021, multiple times while in D.C. I had coincidental contact with Ray Epps throughout the day and people who appeared to be working in concert with Ray Epps. Other than Capitol Police attacking peaceful protesters without provocation or warning, Ray Epps was more responsible for the for initiating the events that happened at the Capitol than anyone else. He is seen on video January 5th encouraging other patriots to go inside the Capitol which is the very inception of the whole idea to actually go inside. However, he is still not indicted or spent one day in jail. I’m actually the one labeled as the de facto leader of January 6th by the government and Chief Judge Howell of the DC Circuit.

Here is a brief account of the morning of January 6th 2021. Some details are left out as I still face trial.

On the morning of January 6th my mother, friend, and I were walking down Constitution Avenue toward Ellipse Park. I was talking into my megaphone something about Joe Biden when I was waived down by who I now know as Ray Epps. We walked over to Ray Epps and associates who were wearing military colors. He was yelling, “We are marching over to the Capitol at 1:00pm whether Trump is done speaking or not and we are going inside.”

US Declares State of Emergency Over Monkeypox