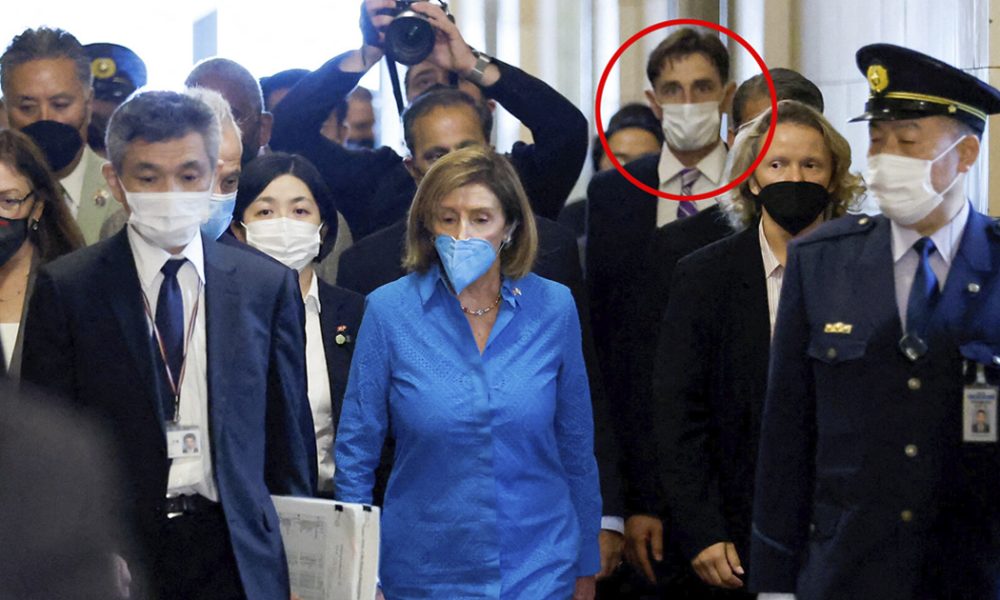 Nancy Pelosi’s son is the second largest investor in a $22million Chinese company whose senior executive was arrested in a fraud investigation, DailyMail.com can reveal, raising questions about his secretive visit to Taiwan with his mother.

As well as investing, Paul Pelosi Jr, 53, also worked for the telecoms company, Borqs Technologies, in a board or consultancy role, Securities and Exchange Commission documents show.

He was awarded 700,000 shares for his services, making him the fifth largest shareholder in the company. After other insiders sold stock in June 2021 he became the second largest – more stock than one of its two co-founders and topped only by CEO Pat Sek Yuen Chan.

In September 2019 Chinese law enforcement detained the president of one of Borq’s subsidiaries and seized copies of contracts and accounting records in a reported fraud investigation.

A later SEC filing from May 2022 listed the top 10 shareholders which did not include Pelosi Jr., suggesting he has slipped down the rankings of top shareholders since last year.

Nancy’s spokesman, Drew Hammill, also told DailyMail.com neither company has ties to Asia and neither processes mined lithium. Neither currently have revenue.

DailyMail.com’s revelation of Pelosi Jr.’s role in the Beijing-based company comes after he and his powerful mother visited Taiwan in a show of solidarity for the nation that China controversially claims is part of its sovereign territory.

Pelosi Jr.’s name was not listed in the official delegation sent out by the Speaker’s office. In a statement this week the Speaker admitted her son was her ‘escort’ on the trip in lieu of her husband when questioned by the press.

Nancy’s son’s ties to the Chinese firm could put the House Speaker in an awkward position over her current campaign to tackle the Chinese government’s aggression abroad and its corporate influence in the United States.

During their 19-hour visit the House Speaker and Pelosi Jr. were photographed alongside Taiwan’s President Tsai Ing-wen and other top Taiwanese officials.

The Chinese government labeled the visit ‘vicious’ and ‘provocative’ and even announced unspecified sanctions against Pelosi and her family – leaving the fate of her son’s Chinese investments in question.

Borqs is a Chinese telecoms company that specializes in ‘Internet of Things’ products and is listed on the Nasdaq stock exchange with a current market capitalization of $22million.

In 2020 Nancy Pelosi announced her backing of a bipartisan bill to bar some Chinese companies from listing on US stock exchanges, and has been building a coalition in the House for a sprawling anti-China bill that originated in the Senate.

Borqs disclosed the Yunnan province police action against one of their senior executives in a September 2019 SEC filing.

‘On September 11, 2019, the Yunnan Public Security Bureau (the ‘Bureau’) detained the president, one employee and one former employee of Yuantel, the MVNO business unit that the Company is in the process of selling, for questioning,’ the company filing said.

‘Officers of the Bureau also took copies of contracts between Yuantel and Shandong Yafeida Information Technology Co., Ltd. (‘Yafeida’) and a copy of Yuantel’s accounting records.

‘According to an article published online in China on June 10, 2019 by the Economic Report, four persons from the management of Yafeida had been arrested and accused of fraudulent activities, and no further details have been released as of the date hereof. Yafeida purchases SIM cards from Yuantel and other MVNOs and mobile operators in China.

‘No charges have been made against the president or any employee of Yuantel. The Company will cooperate with the Bureau in connection with this proceeding. The operations of Yuantel and the Company are continuing as in the past. There have been no other details released by the Bureau as of the date of this report.’

Chinese authorities do not appear to have released further information on the investigation since.

According to Borqs’ SEC filings in June 2021, Pelosi Jr. acquired 700,000 shares of the company in an ’employee benefit plan’.

The 400,000 shares Pelosi Jr. owned at the time were worth hundreds of thousands of dollars, though the stock price has fallen precipitously since.

A March 2022 letter submitted to the SEC suggested Pelosi Jr. was still a shareholder.