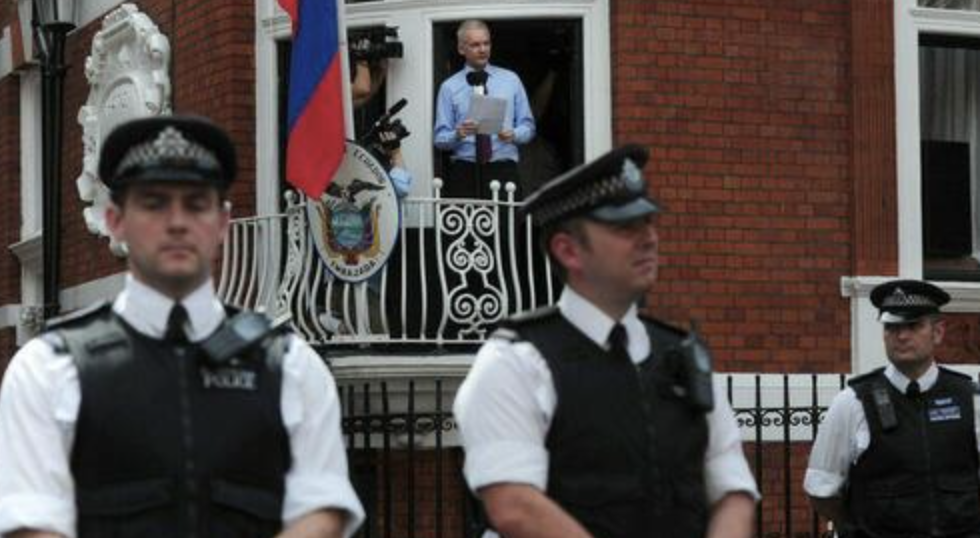 The British government assigned at least 15 people to the secret operation to seize Julian Assange from the Ecuadorian embassy in London, new information shows. The WikiLeaks founder was given political asylum by Ecuador in 2012, but was never allowed safe passage out of Britain to avoid persecution by the U.S. government.

The Australian journalist has been in Belmarsh maximum-security prison for the past three and a half years and faces a potential 175-year sentence after the High Court of England and Wales green-lighted his extradition to the U.S. in December 2021. “Pelican” was the secret Metropolitan Police operation to seize Assange from his asylum, which eventually occurred in April 2019. Asylum is a right enshrined in the Universal Declaration of Human Rights.

The operation’s existence was only revealed in the memoirs of former Foreign Minister Sir Alan Duncan which were published last year. The U.K. government routinely blocks, or obfuscates its answers to information requests about the Assange case.

But the Cabinet Office recently told Parliament it had seven officials working on Operation Pelican. The department’s role is to “support the Prime Minister and ensure the effective running of government,” but it also has national security and intelligence functions.

The Home Office, meanwhile, told Parliament it had eight officials working on Pelican. The Home Office oversees MI5 and the head of the department has to sign off extraditions to most foreign countries. The then home secretary, Priti Patel, ordered Assange’s extradition to the U.S. in June.

Other government ministries refused to say if they had staff working on Pelican, including the Ministry of Justice (MoJ). The MoJ is in charge of courts in England and Wales, where Assange’s extradition case is currently deciding whether to hear an appeal. It is also in control of its prisons, including Belmarsh maximum security jail where Assange is incarcerated.

When asked if any of its staff were assigned to Pelican, the MoJ claimed: “The information requested could only be obtained at disproportionate cost.” It is unclear why the Home Office, a bigger department with more staff, could answer such a question, but the MoJ could not. There is no obvious reason why the MoJ would have staff assigned to Pelican, so revelations that it did would cause embarrassment for the government.

Meanwhile, the Foreign Office told Parliament it had no staff “directly assigned” to Pelican, but refused to say if people working on the operation were located on its premises.

Sir Alan Duncan, foreign minister for the Americas from 2016-19, was the key U.K. official in the diplomatic negotiations between the U.K. and Ecuador to get Assange out of the embassy. In his memoirs he wrote that he watched a live-feed of Assange’s arrest from the Operations Room at the top of the Foreign Office alongside Pelican personnel.

After Assange had been imprisoned in Belmarsh, Duncan had a drinks party at his office for the Pelican team.

“I gave them each a signed photo which we took in the Ops Room on the day, with a caption saying ‘Julian Assange’s Special Brexit Team 11th April 2019,’” he wrote.

Ecuador’s president from 2007-17, Rafael Correa, recently told Declassified he granted Assange asylum because the Australian journalist “didn’t have any possibility of a fair legal process in the United States.” He added that the U.K. government “tried to deal with us like a subordinate country.”

In September 2021, 30 former U.S. officials went on the record to reveal a CIA plot to “kill or kidnap” Assange in London. In case of Assange leaving the embassy, the article noted, “US officials asked their British counterparts to do the shooting if gunfire was required, and the British agreed, according to a former senior administration official.” These assurances most likely came from the Home Office.

Biden to Union Workers in Michigan: “Ten Years Ago, How Many of You Knew What the Hell a Supply Chain Was?” (VIDEO)