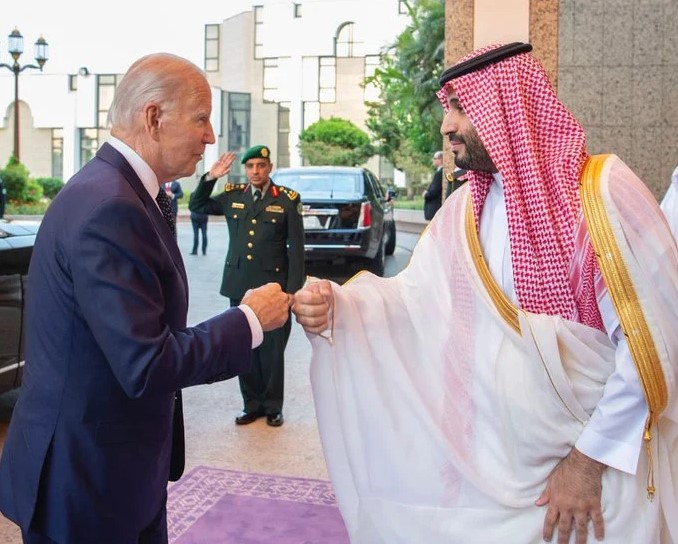 Joe Biden’s trip to the Middle East was a total disaster.

For starters, Joe Biden went back on his promise not to meet with Saudi Arabian Crown Prince Mohammed bin Salman.

“I’m not going to meet with MBS. I’m going to an international meeting, and he’s going to be part of it,” Biden said last month.

Biden was greeted with a fist bump when he arrived to Alsalam Royal Palace in Jeddah.

In 2019, Joe Biden vowed to make Saudi Arabia a “pariah” nation over the killing of Jamal Khashoggi,

The Saudis laughed at Joe Biden when a reporter humiliated him by asking if Saudi Arabia is still a “pariah.”

In an effort to save face, Joe Biden told reporters he confronted MBS about Khashoggi’s murder.

“He [MBS] basically said that he was not personally responsible for it. I indicated that I thought he was,” Biden told reporters.

The Saudi FM (at the behest of MBS) called Fox News on Saturday after Biden already left and claimed he “did not hear” Joe Biden tell MBS he believed he was responsible for Khashoggi’s murder.

The Saudis told Biden to pound sand after he begged for oil.

On Saturday the Saudi Minister of State told CNN that the regime refused to commit to boosting oil production.

Republicans Gain Voter Registration Advantage in Another State for the First Time Ever: ‘Historic’