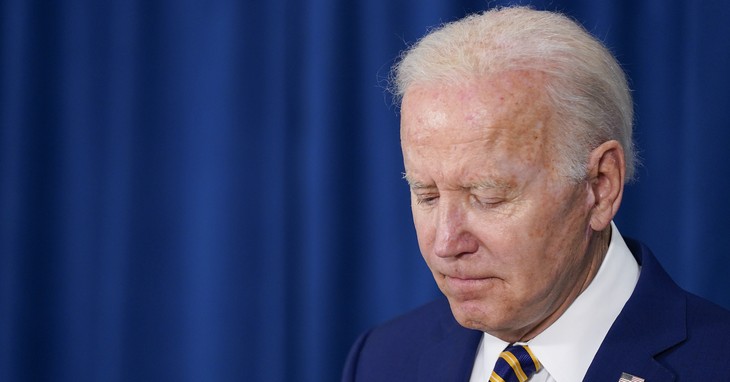 For all the talk this week about the Supreme Court destroying democracy, it looks as though the bigger issue is that democracy just currently favors the Republican Party.

Other than two outliers in the last week or so, the Republican Party has been enjoying a healthy lead on the generic ballot, dating all the way back to November.

Democrats took the opportunity of the NPR/PBS/Marist poll last week, which had their party up by seven points, to contend that the majority of the country did, in fact, support the Democratic majority against the “extremist” GOP. But virtually every poll since November has shown otherwise — and certainly, no other poll has shown something as drastic as a seven-point lead for the party in power.

The most recent poll on the subject comes via Emerson, and it puts Republicans up by a modest three points (46-43). The devil, as always, is in the details though.

Looking at 2024, 64% of Democratic primary or caucus voters think President Biden should be the Democratic nominee for president, while 36% think he should not be. In the 2024 Republican Primary, 55% of voters would support former President Trump, 20% Florida Governor Ron DeSantis, and 9% former Vice President Mike Pence. No other potential GOP candidate clears 5%.

In a hypothetical 2024 Presidential Election matchup between President Biden and former President Trump, Trump holds 44% support while Biden has 39% support; 12% would vote for someone else and 5% are undecided. “Since last month, Trump has held his share of support while Biden’s support has reduced four points.”

There are some other key details in the poll that should be noted by both sides of the political aisle.

That should help inform both sides as to their election strategy going forward. We’re at the point in the election cycle where voters are solidifying their November choices, and barring a major scandal, it looks as though Republicans are holding an advantage. Certainly, there are places where Democrats can make gains, but the problem is that Democrats really aren’t listening to American voters. Just their vocal, far-left base.

I mentioned yesterday that with his Supreme Court win in Biden v. Texas, Joe Biden has now taken ownership of the immigration crisis currently at our border (and worsening each day). In other polling, we’re consistently seeing that immigration is a top-five issue for voters right now. As much as the Democrats are trying to ignore it, it’s impossible. There is a humanitarian crisis at the border, and the party in power is doing nothing.

Given their position in the polls right now, you’d think that the Democrats would be adjusting. The problem is that they don’t actually appear to know how to govern. They have been able to rule via judicial fiat up until this year — the Supreme Court has returned several issues important to Democrats to the states. Now the Democrats are being forced to actually govern and their response has been to attack the Supreme Court because of it.

It’s not a new phenomenon, either. Barack Obama had full control over Washington D.C., including a filibuster-proof Senate, and he chose to pass the Affordable Care Act, a half-hearted attempt to overhaul the health insurance and healthcare industries that only served to alienate American voters. He promised on the campaign trail to codify Roe v. Wade. He could have passed the Democrats’ dream gun control bill. He could have solidified the Democratic agenda for a generation. But he chose not to because the courts had always backed his party.

The Biden administration and the Democratic Party are now paying the price for it. They are facing a bloodbath in November. All the polling shows it.

POLL: Even Democrats Think The Country Is Going In The Wrong Direction

Capitol Police arrested more than 180 people, including Judy Chu, at a pro-abortion-rights protest near the Supreme Court.