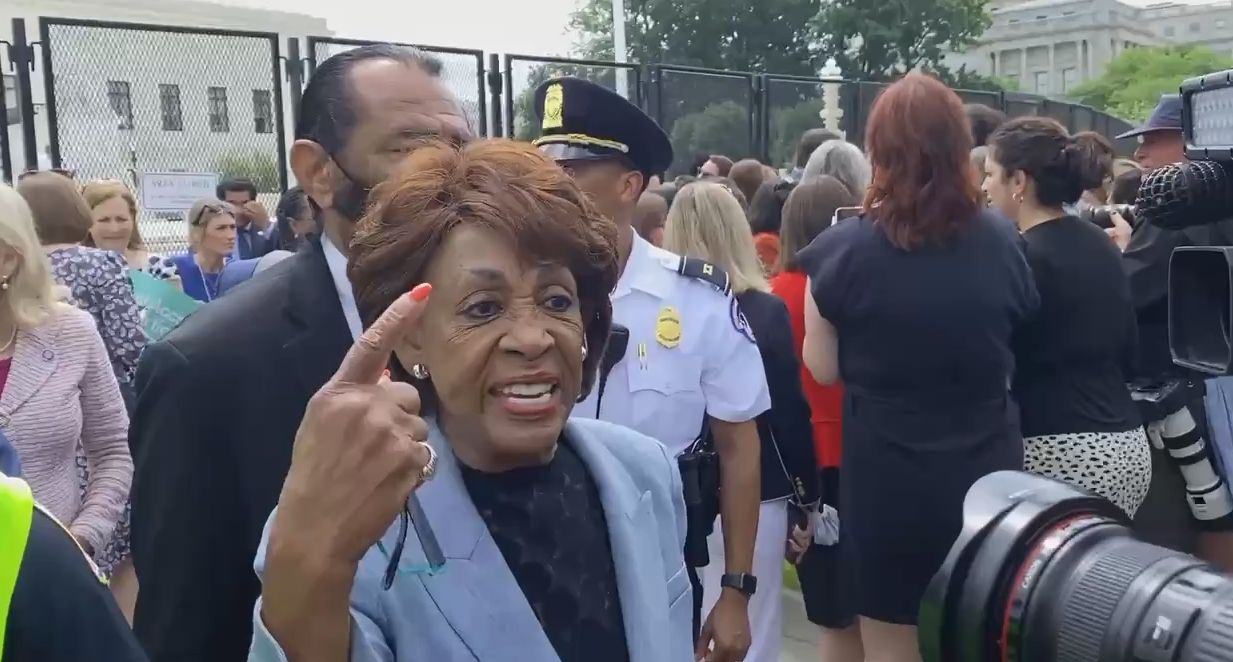 Maxine Waters, a Congresswoman from California with a history of incendiary and divisive statements, railed against the U.S. Supreme Court after its decision on Friday morning that there is no guaranteed right to abortion in the Constitution.

“They ain’t seen nothing yet,” Waters railed. “Women are going to control their bodies no matter how they try and stop us. To hell with the Supreme Court!”

“We will defy them,” she thundered. “Women will be in control of their bodies. And if they keep black women are intimidated or afraid, they got another thing coming. Black women will be out, we will be out, rather be out millions. We’re going make sure we fight for the right to control our bodies.”

“Women are not fighting alone,” she added. “There are men who have wives and daughters. There are men who respect women, and there will be men in fight with women. This is not over — just the genesis of a new beginning.”

Rep. Alexandria Ocasio-Cortez was out shouting talking points with protesters near the Supreme Court.

“This decision is… illegitimate!” she shouted with the protesters. “Into the streets!” they also chanted.

The Dobbs case handed down by the Supreme Court on Friday made it remarkably clear that despite all of the Democratic Party’s hyperbole and spin, there is no guaranteed right to abortion in the U.S. Constitution.

“The Court has been ‘reluctant’ to recognize rights that are not mentioned in the Constitution,” the court majority held. “Guided by the history and tradition that map the essential components of the Nation’s concept of ordered liberty, the Court finds the Fourteenth Amendment clearly does not protect the right to an abortion.”

“Until the latter part of the 20th century, there was no support in American law for a constitutional right to obtain an abortion,” the decision added. “No state constitutional provision had recognized such a right. Until a few years before Roe, no federal or state court had recognized such a right. Nor had any scholarly treatise. Indeed, abortion had long been a crime in every single State. At common law, abortion was criminal in at least some stages of pregnancy and was regarded as unlawful and could
have very serious consequences at all stages.”

“American law followed the common law until a wave of statutory restrictions in the 1800s expanded criminal liability for abortions,” the ruling continued. “By the time the Fourteenth Amendment was adopted, three-quarters of the States had made abortion a crime at any stage of pregnancy. This consensus endured until the day Roe was decided. Roe either ignored or misstated this history, and Casey declined to reconsider Roe’s faulty historical analysis.”

The Supreme Court then delivered the final blow to the respondents’ argument that abortion is a Constitutionally protected right.

“Respondents’ argument that this history does not matter flies in the face of the standard the Court has applied in determining whether an asserted right that is nowhere mentioned in the Constitution is nevertheless protected by the Fourteenth Amendment,” the court added.

Meanwhile, Missouri and Texas are among the first to ban abortions in their states.

Biden calls on Congress to restore Roe v. Wade protections as federal law: ‘This is not over’