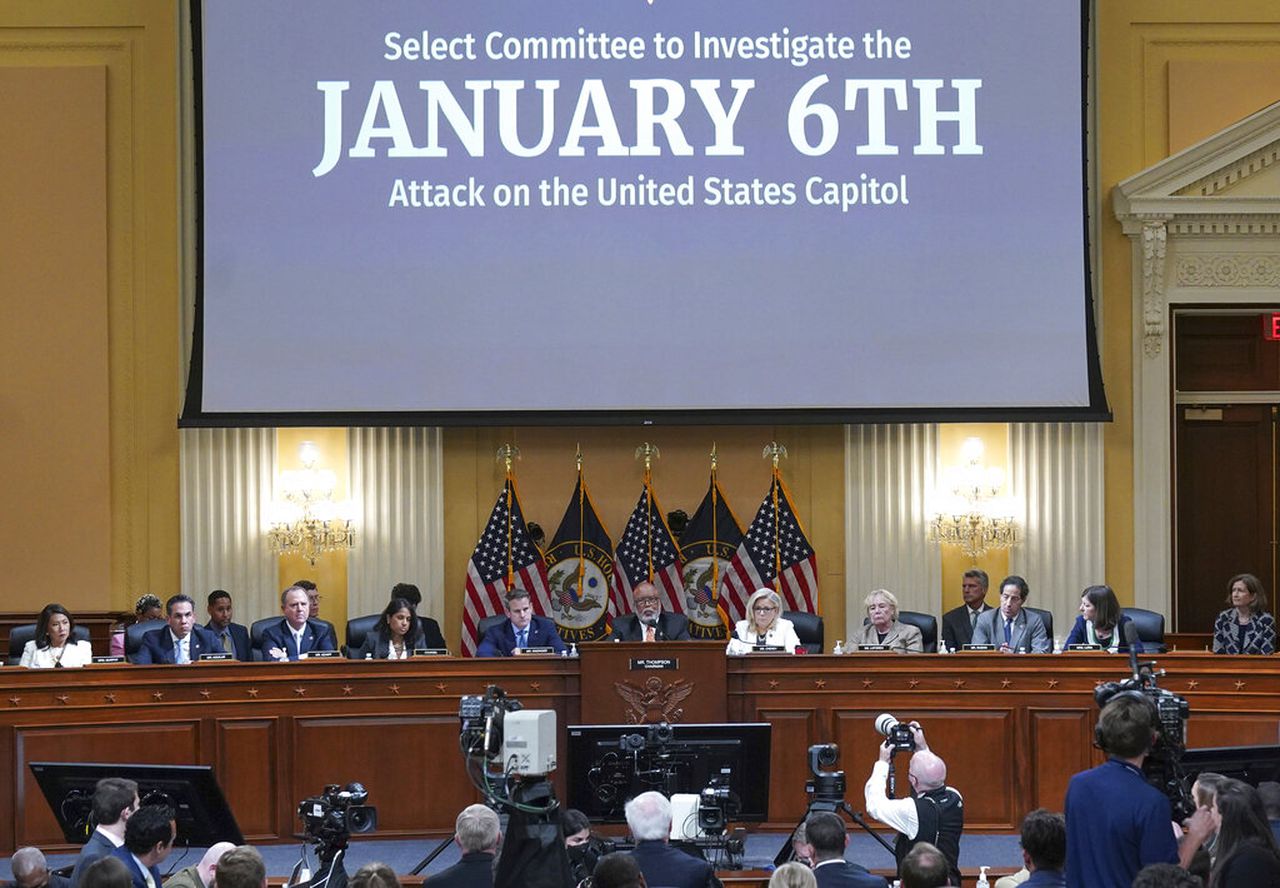 The desperate Unselect Committee is using unethical if not possibly illegal measures to secure favorable witness testimonies from persecuted January 6th Defendants that have pled guilty, such as their witness Stephen Ayres that testified yesterday.

Liz Cheney alleged that Trump personally reached out to a witness who has not yet testified. The truth is the JANUARY 6TH COMMITTEE IS REACHING OUT TO DEFENDANTS TO TESTIFY BEFORE THEIR SENTENCING! How is this legal?

This email below was released to The Gateway Pundit by a January 6th Defendant that pled guilty but is awaiting sentencing. It was sent to the defendant by James Sasso, Investigative Counsel for “The Unselect Committee to Investigate the January 6th Attack on The United States Capitol”. See the email here:

The recipient of this email wishes to remain anonymous as they are fearful of retaliation by the Government when sentenced. We blacked out information to protect their identity.

This is the statement of the individual who forwarded this email to us:

“The Committee wants me to apologize for being there, they want me to apologize for speaking out on my opinion on the matter. I just can’t do that. That would be a lie. The only advantage for doing that is if I can avoid some kind of harsh sentencing which is coming up. If I don’t play ball with them I fear they will be retaliate, there will be a consequence for it.”

Logically, these cornered defendants would feel immense pressure to give the Unselect Committee the answers they want to hear “in exchange” for a favorable sentence, whether they are true or not. How can this Committee present these compromised witnesses to the American public as credible when they know they are not? The game plan all along was to viciously persecute American citizens and ultimately use them to keep President Trump from getting elected again. The Biden Regime has men still locked away in pre-trail solitary confinement, torturing them until they crack and give them what they want.

“The fact that the January 6th Committee is using convicted defendants awaiting sentencing as witnesses against President Trump to corroborate their claims is unethical, predatory and dishonest,” said top J6 Attorney Joseph McBride. “There is no difference between the Committee’s actions and a hostage held by terrorists at gunpoint being forced to read a letter from his captors saying they are “good people”. Its is deeply disturbing, morally bankrupt and profoundly anti-American.”

Stephen Ayres, a witness the Unselect Committee called yesterday, spoke about this experience on January 6th in front of the Kangaroo Court.  Ayres testified he did not plan on marching to the Capitol, but that former president Donald Trump got “everyone” riled up and urged them to march. After traitor Liz Cheney asked him “Do you still believe the election was stolen?”, the clearly emasculated Ayres made a face and choked out “Not so much now.” Ayres then went on to hug crying Capitol cop Michael Fanone and friends and “apologized” to them in front of flashing cameras.

Ayres pled Guilty to disorderly conduct this past June 8th. He was originally charged with Aiding and Abetting, Entering or Remaining in an Official Building or Grounds, and Obstruction of an Official Proceeding 1512(c)(2) which alone holds a maximum of a 20 year sentence. He wound up plea bargaining with the Regime to the simple charge of Disorderly Conduct. All other charges were dropped. Here is Ayres’ Criminal Complaint and Arrest Warrant.

It is notable that Ayres is the Co-Defendant of Matthew Perna, the January 6th Defendant who committed suicide this past February 26th in desperation after he pled guilty to the very same charges that Ayres had dropped- including the Obstruction of an Official Proceeding 1512(c)(2). Here is Ayres and Perna’s Indictment. **Perna is “Male 1” in Ayres Criminal Complaint.

Apparently a terrified Ayres thought it wiser to sign a plea deal and appear before the nation to denounce Trump then face the same fate as his co-defendant and pal Michael Perna, whose family says he is dead because of his political persecution by Biden’s Justice Department. He signed his plea deal only this past June 8th.

The difference in outcomes for two men on the same exact Indictment is remarkable. The first man, Perna, signed a plea deal last December.

According to an article by Julie Kelly,

“Matthew Graves, the U.S. Attorney for the District of Columbia handling every January 6 prosecution, intervened and asked the court to delay Perna’s sentencing so his office could make sure Capitol defendants are punished equally. “While every case and every defendant are different, the Government is attempting to ensure that similarly situated January 6 defendants are treated in the same manner,” Graves wrote in a motion on February 11. “The Government is attempting to do that in this case and that requires additional time for the Government’s internal review process to be completed.”

Graves’ office has sought lengthy prison terms for defendants who plead guilty to the obstruction felony. In the case of Jacob Chansley, who, like Perna, committed no violent act on January 6 and was allowed into the building by police, Biden’s Justice Department sought 51 months in jail and three years probation. (Judge Royce Lamberth sentenced him to 41 months.)

In sentencing recommendations on obstruction pleas, prosecutors have compared defendants to domestic terrorists and asked judges to act accordingly. “The need to deter others is especially strong in cases involving domestic terrorism, which the breach of the Capitol certainly was,” one of Graves’ prosecutors wrote in Chansley’s sentencing memo. “The sentence of this Court must drive home this fact for this defendant, and any others who may wish to emulate him: crimes committed against this country and democracy will be prosecuted and punished in accordance with the law.”

That appears to be what Graves would have demanded in Perna’s case as well.”

In the case of Ayres, the three more serious charges were dropped, including the feared Obstruction of an Official Proceeding 1512(c)(2) felony charge. He was offered a simple Disorderly Conduct plea deal and was featured on National TV yesterday as a star witness for the January 6th Unselect Committee. It is logical to assume he will receive no jail time when sentenced.

One must wonder if Michael Perna was approached by the January 6th Committee before he committed suicide.

“They are using witnesses that have a gun to their head, for lack of a better term,” said Tina Ryan of Citizens Against Political Persecution. “The entire operation warrants a real independent federal investigation into the tactics and extreme measures the January 6th Committee is using to obtain witnesses that will cooperate with their agenda.”

Cara Castronuova is a co-Founder of C.A.P.P. (Citizens Against Political Persecution and The People’s January 6th Commission. She is an Activist, Investigative Journalist, 2-Time Boxing Champion, Celebrity Fitness Trainer and Television Personality. You can watch her on Newsmax at 10PM EST every Saturday night on “Wiseguys”. You can follow her on & Twitter or Instagram  @CaraCastronuova. She is currently banned on Fakebook & suing them for defamation of character.  You can contact her via the C.A.P.P. website at www.CitizensAPP.us or www.caracastronuova.com if you have any tips or would like to volunteer.  She is also running for New York State Assembly (www.Cara4Assembly.com).

“I Can Do All Things Through Christ Who Strengthens Me.” Phil 4:13.

NAKED AND AFRAID: Buck Naked and Cracked Out Hunter Biden Rides the Water Slide to His Prostitute’s Delight (VIDEO)

“THE NEW YORK TIMES IS TRULY THE ENEMY OF THE PEOPLE!” – President Trump on the NY Times