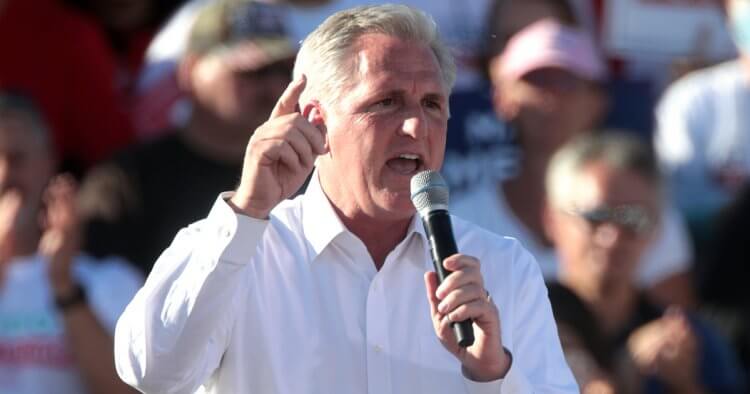 House Minority Leader Kevin McCarthy, R-Calif., basically told Democrats that what goes around, comes around, so they should be prepared.

House Minority Leader and California Rep. Kevin McCarthy is furious and he has put the Democrats on notice after an appearance by Facebook founder and CEO Mark Zuckerberg on the “Joe Rogan Experience” podcast.

Rogan and Zuckerberg were talking about how and why Facebook suppressed the Hunter Biden laptop story and the Facebook CEO said that the FBI warned him, not in relation particularly to the laptop story but in general, that foreign actors would be attempting to influence the decision and to be wary of such possible stories.

“Basically, the background here is the FBI, I think, basically came to us- some folks on our team and was like, ‘Hey, just so you know, like, you should be on high alert… We thought that there was a lot of Russian propaganda in the 2016 election. We have it on notice that, basically, there’s about to be some kind of dump of that’s similar to that. So just be vigilant,’” the Facebook CEO said on Thursday.

“We just kind of thought hey look, if the FBI, which I still view is a legitimate institution in this country, it’s a very professional law enforcement- they come to us and tell us that we need to be on guard about something then I want to take that seriously,” he said.

Zuckerberg explained that the FBI did not expressly tell Facebook to censor or limit distribution of the Hunter Bidens tory, but the company thought it “fit the pattern” of potential propaganda to limit its distribution for 5 – 7 days but it was still allowed to be shared.

This was in contrast to Twitter which did not allow the story to be shared.

But McCarthy took this admission by Zuckerberg as FBI collusion and he warned Democrats that they would pay for it.

“The FBI colluded with Big Tech to silence news stories weeks before the 2020 election in an attempt to control your access to information. Democrats in Congress have been intentionally ignoring the facts. When Republicans are back in charge, we will hold all of them accountable,” he said.

The FBI reportedly received Hunter Biden’s laptop in December 2019 but no raids of his home have occurred nor have indictments followed. That contrasts unfavorably with the rapid pace of the Department of Justice’s prosecution of former President Donald Trump. It received a referral from the National Archives about Trump’s document retention on February 9.

The agency opened an investigation almost immediately and months later raided Trump’s home in Florida to seize boxes of records.

The Biden administration maintains it does not interfere with Justice Department investigations.

VIDEO OF THE WEEK: Protester Screams at Joe Biden and Calls Him a Pedo at Rally