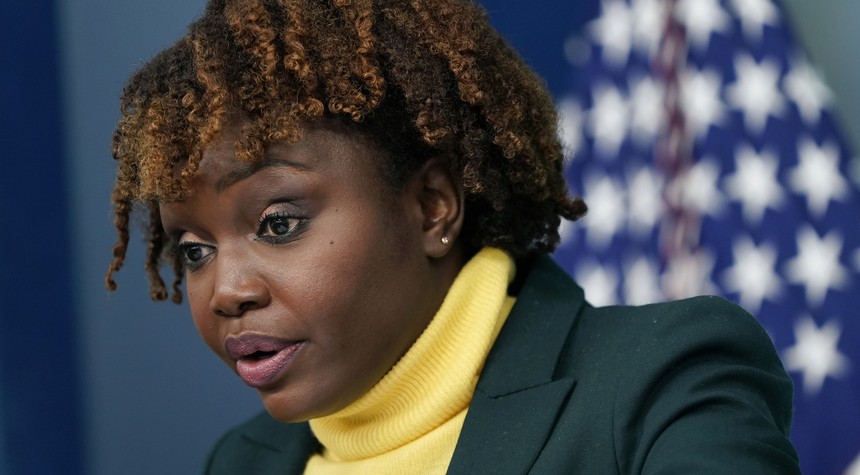 Did you know that Karine Jean-Pierre is the first openly gay, black, immigrant White House Press Secretary in history? You’d be hard-pressed not to given that it’s all the administration, and Jean-Pierre herself, seemed to talk about when she was announced as the replacement for Jen Psaki. Psaki has, of course, made the lateral move over to MSNBC.

But perhaps, in the midst of all that obsession over identity, the White House should have bothered to make sure she was, you know, actually qualified for that job. The results so far speak for themselves, with Jean-Pierre becoming infamous for staring down at her notes, repeating passages verbatim that don’t even relate to the question that was asked. Where Psaki, for all her flaws, was at least quick on her feet, Jean-Pierre constantly mimics a middle-school student who forgot to do their homework.

And while you expect to get a range of platitudes and obfuscations from a White House press secretary, Jean-Pierre doesn’t have the skills to pull the act off, and it’s painfully obvious. In fact, it’s so obvious that even her allies are now starting to notice.

Her answers have baffled reporters, and even made some of her White House colleagues wince. She has increasingly found herself sharing the podium or splitting briefings with JOHN KIRBY, who has been taking the leadon foreign policy and at times appears to function as a co-press secretary.

And Republicans have zeroed in on her as a useful punching bag.

You have to love that while Politico is admitting the obvious in their write-up, i.e. that Jean-Pierre is objectively bad at her job, they still manage to work in a “Republicans pounce” angle.

Against such a difficult backdrop, her stumbles in several instances have made her appear underprepared — in moments quickly weaponized by the right.

She was unaware that Interior Secretary DEB HAALAND had tested positive for Covid and didn’t know Biden had been with Haaland two days before at a Memorial Day event. “Oh, were they?” she said, to which the reporter pointedly noted pictures of the pair.

And when asked that day about the president telling Naval Academy graduates that he had been appointed to the academy in 1965 — a claim met with skepticism — Jean Pierre said: “I didn’t hear that part of the speech.”

Here’s the reality. Jean-Pierre does not “appear” to be underprepared. She is underprepared. In fact, as the above excerpt shows, there are times when she’s not prepared at all. How, as a press secretary, can you be not up to date on a speech the president just gave? How can you suggest that the administration doesn’t even pay attention to the stock market when asked about it crashing? How can you not have an answer ready to go when asked about Biden’s conflation of taxes and inflation?

Understand, though, that Jean-Pierre’s performance would be even worse if she wasn’t surrounded by a compliant media that sees its job as protecting her and the president. Imagine if the briefing room had a dozen reporters like Peter Doocy instead of just one?

Instead, even while offering what is ultimately a critique, reporters manage to make excuses like this.

“She is so focused on not making a mistake that she doesn’t let herself speak freely,” another reporter said. “A lot of her responses end up becoming… it appears that she’s reading from a page.”

Again, it doesn’t appear that she’s reading from a page. She is reading from a page. She brings a big binder into the briefing where she proceeds to read, word for word, answers that may or may not even have any relation to the question asked. That’s who Karine Jean-Pierre is. She’s not a good press secretary, and she would not have snagged the job she holds had the White House not been so desperate to proclaim another “historic first” in promoting her.

And to be sure, I’m not suggesting a black, gay person can’t be a good press secretary. Rather, I’m suggesting this black, gay person isn’t a good press secretary. I think that’s undeniable at this point, and it’s a lesson in why you should not make hires based purely on misguided notions of diversity and equity. The White House chose to make her identity a centerpiece, but in the end, it’s not Jean-Pierre’s attributes that are the problem. It’s her being bad at her job.

Capitol Police arrested more than 180 people, including Judy Chu, at a pro-abortion-rights protest near the Supreme Court.