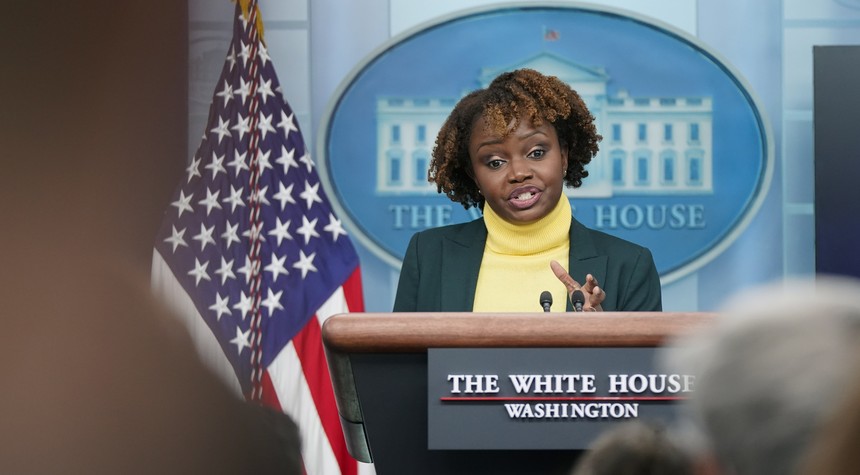 Joe Biden’s comms problems continue as he searches for anyone who can competently speak for him. To be fair, that’s a tall task, though.

Jen Psaki, who has now moved on to MSNBC, had her issues as White House Press Secretary, not because she wasn’t skilled, but because of just how shameless she was. But while she was shameless, she was also an excellent liar, capable of deflecting from Joe Biden’s various transgressions.

By contrast, Karine Jean-Pierre, who replaced Psaki, has a different problem. Yes, she lies like all the rest, but her biggest issue is that she’s just absolutely terrible at coming up with excuses for the president she works for. A press secretary has to be ready to duck and counter incoming questions, and Jean-Pierre presents as not only uniquely unprepared, but she has none of Psaki’s ability to obfuscate on the fly.

That was on full display on Monday after Jean-Pierre was asked to defend Joe Biden’s use of the Defense Production Act to increase the production of solar panels. When pressed on what emergency justified such a move, the press secretary fell flat on her face, essentially admitting to the abuse of power.

That was on full display on Monday after Jean-Pierre was asked to defend Joe Biden’s use of the Defense Production Act to increase the production of solar panels. When pressed on what emergency justified such a move, the press secretary fell flat on her face, essentially admitting to the abuse of power.

You can only laugh at the ineptness on display. Jean-Pierre could have asserted that current energy prices and US dependence on foreign sources denote a national security risk. That wouldn’t have been true, but it would have at least sounded like a justification. Instead, because again, she’s so bad at this, she fell back on a generic talking point about “delivering for the American people” as if she’s still a talking head on cable news. It’s like she doesn’t realize she’s in the big leagues now.

Spoiler: The president does not have the power to use the Defense Production Act simply to “deliver for the American people.” Remember, we are talking about government intervention into the private market, forcing companies to produce certain products. Biden is not a dictator and this is not a communist country. It’s an egregious abuse of power to use the DPA to pursue partisan energy policies when the nation is not facing an imminent threat. And no, as much as they hurt, high prices are not an imminent threat.

Besides, how does producing more solar panels help the national security of the country? The materials used to make them largely come from Asian nations, including China. We don’t become energy independent by transforming our economy into one completely reliant on the Chicoms. Then there’s the fact that fossil fuels are far more efficient, readily available, cheaper, and easier to scale up than solar farms. In other words, Biden isn’t even “delivering for the American people.” He’s just feeding his green base red meat while accomplishing nothing.

Returning to Jean-Pierre, I’m actually surprised at how incapable she is. While much has been made about the fact that she’s black, lesbian, and an immigrant, that obviously doesn’t translate into any actual skill in performing the duties of her office. How long does she last? I give her a year, tops.