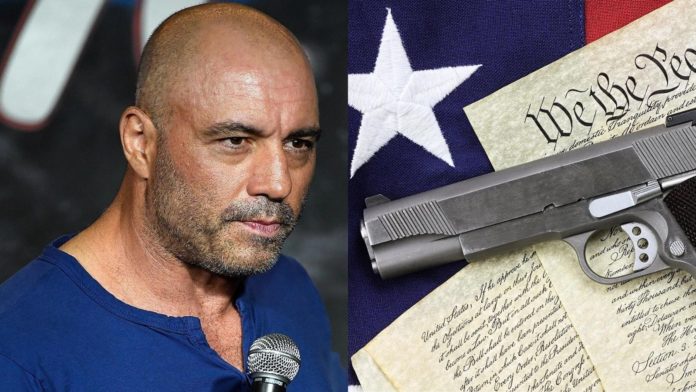 Joe Rogan used part of the Joe Rogan Experience podcast #1831 to discuss how “disgusted” he was to hear Canadian PM Justin Trudeau’s push against gun ownership.

Trudeau’s comments about guns were made on the Crooked Media podcast then reported by the Western Standard.

He said, “We have a culture where the difference is guns can be used for hunting or for sport shooting in Canada and there’s lots of gun owners and they’re mostly law respecting and law abiding.”

Trudeau added, “But you can’t use a gun for self-protection in Canada, that’s not a right that you have, in the constitution or anywhere else.”

The Post Millennial posted a clip on Rumble in which Rogan talked about how “disgusted” he was after reading Trudeau’s statements about not being able to use a gun to protect life.

Rogan said, “It’s one of the most wild things I’ve ever seen in my life”:

On May 29 Breitbart News reported Rogan’s criticism of gun bans, which were being discussed in the wake of the Uvalde shooting.

He said, “It’s like, how do you stop that? No one knows how to stop that. What is the answer? Is the answer to take everyone’s guns? Well, they’re not gonna give their guns up. Only criminals are gonna have guns.”

Rogan also shared another concern that arises in his mind when people talk about banning guns, suggesting that a disarmed population necessarily gives all the power to the ruling class in Washington:

I don’t think it’s wise to take all the guns away from people and give all the power to the government. We see how they are with an armed populace, they still have a tendency towards totalitarianism. And the more increased power and control you have over people, the easier it is for them to do what they do.

“And it’s a natural inclination, when you’re a person in power, to try to hold more power and acquire more power,” Rogan added.