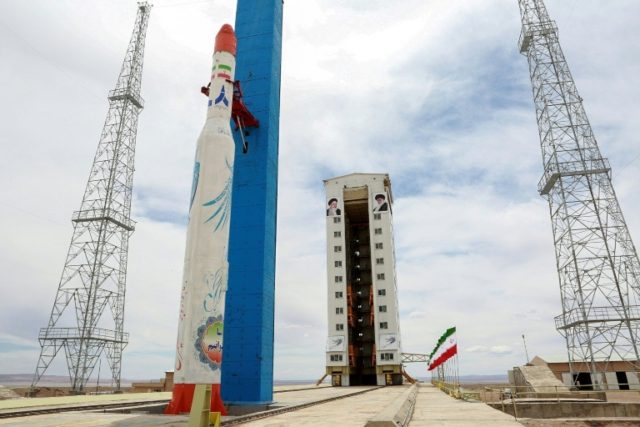 Iranian state media published a video clip boasting of the regime’s nuclear capabilities, claiming it can — in a moment’s notice — “transform” its nuclear program into an “atomic military” one, creating a “nightmare” for Israel and the West, while warning of its “ability to turn New York into a heap of rubble from Hell.”

The slightly-over-two minute clip begins by claiming the Islamic Republic’s uranium enrichment in secret facilities “has struck fear and horror in the hearts of the Westerners and the Zionist regime.”

“These facilities have brought Iran one step away from a nuclear breakthrough and from joining [the countries] that have nuclear weapons,” the narrator adds.

The clip also claims that Tehran has “activated a cascade of advanced IR-6 centrifuges in its top secret underground facilities in Fordo,” warning that “in the blink of an eye” it can “transform Iran’s peaceful nuclear program into an atomic military program, and make the nightmare of Israel and the West come true.”

It then states that, according to MI6 intelligence, the theocratic state “has amassed sufficient material to build a nuclear bomb” and its secret facilities are so fortified that they can withstand a nuke.

Any attack by Israel or “the West” on Iran’s Natanz facilities, the video warns, would trigger the secret Fordo facilities to “go into battle readiness” and “execute the nuclear breakthrough project on their own, in a short time.”

The clip concludes by describing Iran’s intercontinental missiles as having made America “very cautious in its positions towards” the Islamic regime, as they pose a serious threat to U.S. cities.

“[I]n case of a hostile measure by America, it gives Iran the ability to turn New York into a heap of rubble from hell,” the narrator says.

The clip was released on Saturday by Iran’s Islamic Revolutionary Guards Corps-affiliated Bisimchi Media Telegram channel, and titled “When Will Iran’s Nuclear Bombs Wake Up from Their Sleep?”

According to the BBC, the head of Iran’s Atomic Energy Organization Mohammad Eslami appeared to confirm many details in the video on Monday, saying the regime currently has the “technical ability” to construct a nuclear bomb but has yet to make the political decision to do so.

Ther statement echoed a similar one by senior Iranian adviser Kamal Kharrazi who last month said the Islamic Republic “has the technical means to produce a nuclear bomb but there has been no decision by Iran to build one.”

In response to the clip, Israeli American journalist Caroline Glick claimed, “We warned this would be the consequence of America’s refusal to confront Iran with any seriousness.”

“We warned this would be the endstate of Obama-Biden’s nuclear appeasement,” she wrote.

“The progressives attacked us as warmongerers. They did this.”

Tucker Carlson: The Biden admin is provoking a hot war with China