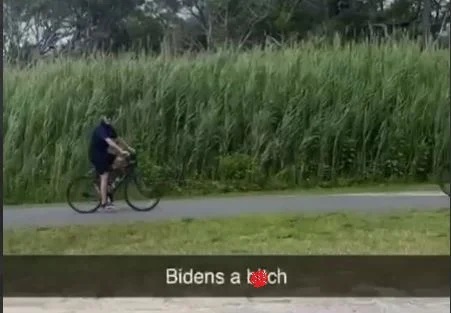 In a surprise move, Joe Biden’s handlers allowed him to ride a public again today.

This follows the last ride he had where he fell off his bike at a complete stop.

Today Joe Biden was heckled while out riding on a path by his home.

Heckler: “Hey, where your f***ing training wheels at?”

Less than a month ago Joe Biden fell off his bike while riding near his home in Rehoboth Beach during a weekend ride.

According to reports, Biden had trouble removing his shoes from the bikes’ pedals.

Secret Service agents swarmed the fallen commander-in-chief as he needed help in getting back up.

Feeble Joe Biden quickly got up and chatted with the reporters and Delaware bystanders. He said he will talk to Xi soon and is in the process of making up his mind on tariffs, a Bloomberg reporter tweeted.

But for some reason Joe’s handlers let him back on a bike this weekend.
What are they thinking?