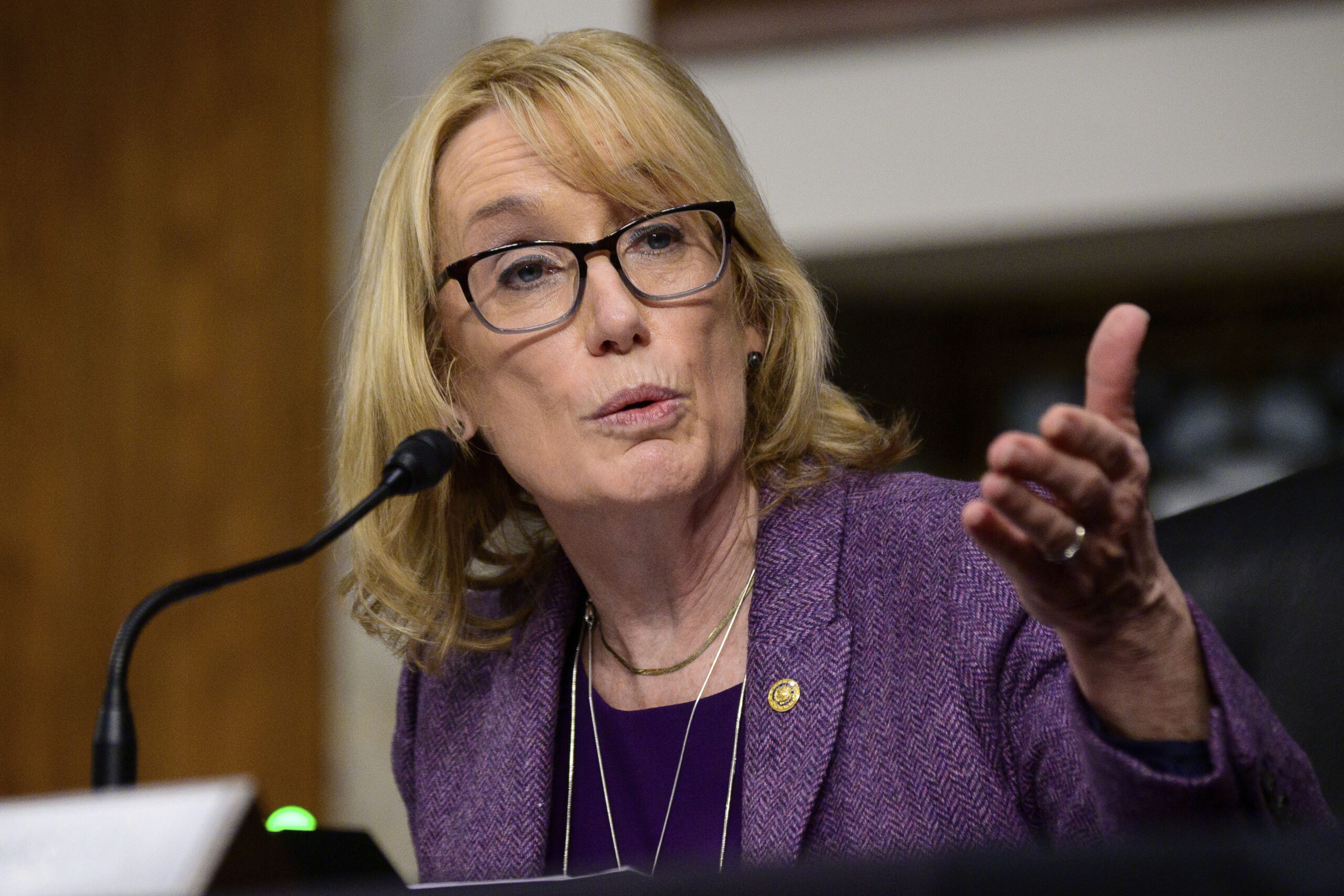 Democratic senator from New Hampshire who faces difficult reelection puts daylight between herself and President Biden.

CONCORD, N.H. – Democratic Sen. Maggie Hassan says that it’s “frustrating” that President Biden has yet to support her push to temporarily repeal the federal gas tax, to help consumers cope with skyrocketing prices at the pump.

Hassan, who faces a very difficult political climate as she runs for re-election this year, isn’t shy when it comes to spotlighting her policy differences with the president, whose underwater approval ratings are doing Hassan no favors as she seeks a second six-year term representing the battleground state of New Hampshire in the Senate.

“What I’ve been pushing for is, among other things, is suspending the gas tax. That helps put some more money back in people’s pockets. I’m pushing the administration to support that. They haven’t yet and that’s frustrating,” Hassan told Fox News on Friday.

Hassan spoke with reporters at the New Hampshire’s Secretary of State’s office as she officially filed to place her name on the 2022 ballot. She arrived a couple of hours after consumer prices hit a new four-decade high, with the Labor Department reporting that the consumer price index, a broad measure of the price for everyday goods, including gasoline, groceries and rents, rose 8.6% in May from a year ago.

Hassan and fellow first-term Democratic Sen. Mark Kelly of Arizona, who also hails from a key general election battleground states and who both are being targeted by Republicans as they run for re-election, co-authored a bill in February, when the average national price for regular gasoline was nearing $3.50 per gallon. The national average as of Friday morning stood a few pennies shy of $5 per gallon.

The Hassan/Kelly bill, which they titled the Gas Prices Relief Act, would scrap the 18.4-cents-per-gallon federal tax through the rest of 2022 and calls for the Treasury Department to make sure the savings are passed on to consumers rather than the oil and gas companies. And the measure, if passed into law, would also require the federal government to transfer money into the Highway Trust Fund, which is used for road construction and maintenance and supporting mass transit, to make up for the lost revenues.

The unrelenting impact of soaring gas prices — and the overall surge in inflation — continues with less than five months to go until November’s midterm elections, when the Democrats hope to retain their razor-thin majorities in the U.S. House of Representatives and the Senate. Last month Hassan went up with a TV commercial in her home state spotlighting that the senator is “taking on members of my own party to push a gas tax holiday, and I am pushing Joe Biden to release more of our oil reserves. That’s how we lower costs and get through these times.”

On Friday, Hassan reiterated that “we also need to stand up to big oil. That’s why we have been asking the FTC (Federal Trade Commission) to investigate whether there is market manipulation or price gouging going on.”

And the former two-term governor argued that “because when you look at this, big oil’s got record profits, but they keep increasing the price of gasoline anyway while they have extra capacity that they could tap but they choose not to.”

This spring Hassan also put daylight between herself and the Biden administration over another important issue on the minds of voters — border security and immigration. She vocally disagreed with the administration’s move to rescind a Trump-era pandemic restriction known as Title 42, which allowed officials to rapidly expel asylum seekers that crossed U.S.-Mexico border. A couple of months ago Hassan took a well-publicized trip to the southern border, becoming one of a growing number of Democratic Senate incumbents and candidates running in November who are voicing serious concerns over the move.

Title 42, an order issued by former President Donald Trump’s administration amid the coronavirus outbreak, has been used by both the Trump and Biden administrations to expel a majority of migrants at the border. While it is a public health order, not an immigration policy, it became one of the central border policies in place as the U.S. faces a continuing crisis of numbers at the border. And the Biden administration’s move came after more than a year of pressure from fellow Democrats amid frustration with the inability to end a policy they view as illegal and cruel to those fleeing persecution.

But the issue, along with inflation, has become another political liability for the president and his party.

As she arrived at New Hampshire’s State House to file for re-election, Hassan was met by a large group of supporters, as well as a smaller group of people protesting her stance on border security and immigration.

Asked about the demonstration, Hassan told reporters “we have a disagreement here. I do not think the administration should lift Title 42 until there are resources at the border that ensure safety and security because all sides of this issue agree that once Title 42 is lifted, we’re going to see an increase in illegal border crossing attempts, and we need to have resources on the ground that will really keep the border safe and secure and orderly so that it also be humane.”

The senator emphasized that “I respect that they have a disagreement with me about this. At the end of the day I need to stand up for the safety and security of my state and my country.”

Asked by Fox News if she’d still welcome having the president join her on the campaign trail later this year, Hassan said “I’d always welcome the President of the United States to New Hampshire. But it’s also really important that we stand up for the people we represent and listen to the people we represent.”

But she also mentioned another difference with the Biden White House, saying it’s “really important that we have people in the administration that will work to combat the opioid epidemic, which is why I opposed the president’s FDA nominee, because he wouldn’t acknowledge the role the FDA had in fueling the opioid epidemic.”

Republicans argue that the daylight Hassan’s putting between herself and the administration is nothing more than election year campaign politics.

Republican National Committee spokesman Andrew Mahaleris charged that “Maggie Hassan has sat idly by while the Biden administration has failed New Hampshire time after time. Granite Staters know that the radical Biden-Hassan agenda is destructive to their families, their livelihoods and their wallets.”