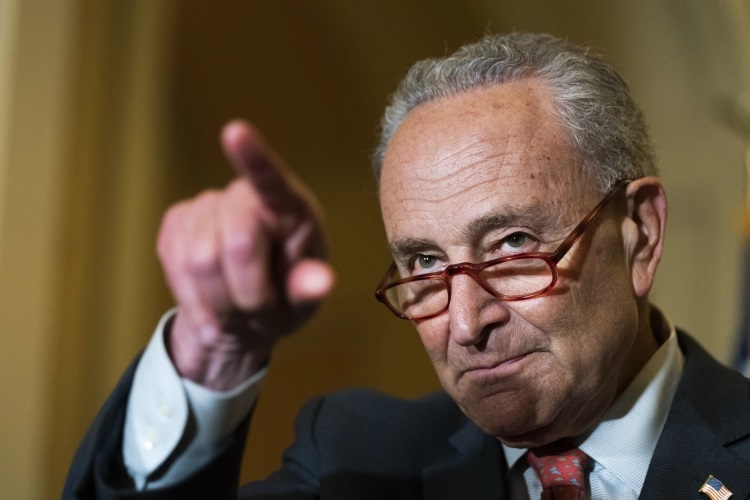 Those were the words of then-Senate Minority Leader Chuck Schumer, one of the most powerful elected officials in the nation, in March 2020. After spending years cynically delegitimizing the high court, Schumer had moved on to openly threatening lifetime-appointed judges, by name, because he feared they would knock down the concocted constitutional right to an abortion.

Initially, Schumer refused to walk back those remarks. His spokesman ludicrously claimed the statement was “a reference to the political price Senate Republicans will pay for putting these justices on the court.” Of course, the senator hadn’t singled out the Republican Party, or any Republican. He had called out the two newest justices by name.

Yet it is almost surely the case that the coverage of a California man carrying weapons and burglary equipment near Kavanaugh’s home, allegedly there to murder the Supreme Court justice over the leaked opinion in Dobbs v. Jackson Women’s Health, will not be tied to the rhetoric of Democrats like Schumer.

CNN political reporters will not walk from one Democratic senator to the next, asking them if their rhetoric is responsible for inciting a man to show up at the justice’s home with a tactical knife, a Glock, pepper spray and zip ties. We will not have a national “conversation” about the specter of leftist violence.

In 2017, when James Hodgkinson walked onto a baseball field in Alexandria, Virginia, and opened fire with the intention of massacring Republican leadership, few outlets even mentioned that he was a big fan of socialist Sen. Bernie Sanders, a man who tells his minions that the nation is on the precipice of fascism. No one in the media blamed Sanders for the actions of a madman. The standards of culpability for political violence differ from situation to situation.

When cosplay Nazis rioted in Charlottesville, Virginia, every Republican was asked to take ownership of a movement that had nothing to do with their beliefs. When leftist unrest across the nation caused billions in damage and destroyed thousands of lives, one could barely get anyone in the media to admit it was even happening.

When a goofy (and largely FBI-hatched) kidnapping plot against Michigan Gov. Gretchen Whitmer was stopped, it was a major story, framed as a microcosm of MAGA terrorism. Today there is a slew of attacks on pro-life centers across the country, and it barely gets any notice.

Normally I wouldn’t blame Democrats for the actions of extremists, either. The problem is that not only do they continue to push the boundaries with Schumer-like threats, but they are engaged in the relentless, daily smearing of their political opponents as seditious, vote-suppressing, child-murdering fascists and insurgents. If this were true, violence would be justified. But it’s a sinister lie.

Moreover, though most people abhor violence, there is a concerted effort to intimidate justices.

When Fox News correspondent Peter Doocy asked former White House press secretary Jen Psaki if activists posting maps to homes and doxxing Supreme Court justices was the “kind of thing this president wants,” she responded, “Look, I think the president’s view is that there’s a lot of passion, a lot of fear, a lot of sadness from many, many people across this country about what they saw in that leaked document.” Kavanaugh’s would-be murderer told the FBI he got the idea to kill the Supreme Court justice after finding his address posted on the internet.

And let’s not forget that the White House encouraged people to go to the justices’ homes to protest. This is an attack not only on the separation of powers but also on basic norms of civility.

The same people who are clamoring to limit free expression can’t even ask their side to observe basic decency. Not long ago, President Joe Biden argued that activists harassing Sen. Kyrsten Sinema in the bathroom to pressure her to support Build Back Better was “part of the process.” The people who promised to bring back norms are engaged in abnormal behavior.

As of this writing, House Democrats have still refused to vote on the Supreme Court Police Parity Act, passed a month ago by the Senate, which would offer enhanced protection for all justices. It is not unreasonable to assume that those House Democrats want justices to feel intimidated. That was almost surely the goal behind the Dobbs leak, and the reason Schumer stood on the steps of the Supreme Court and threatened two justices by name.