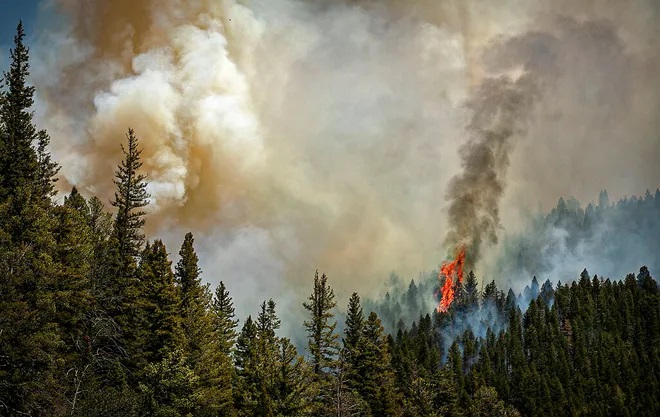 Ronald Reagan, one of America’s greatest presidents, once made a statement that acknowledged an unfortunate truism: “The nine most terrifying words in the English language are: I’m from the Government, and I’m here to help.”

The residents of New Mexico can relate. When the Biden administration took what should have been beneficial action, they unleashed an unprecedented disaster.

It appears the largest wildfire in New Mexico history was caused by the federal U.S. Forest Service. In response, New Mexico Governor Michelle Lujan Grisham has demanded the federal government pay for 100 percent of the recovery costs.

As reported by the Las Cruces Sun News, the U.S. Forest Service started fires in what were supposed to be two separate controlled burn locations, Calf’s Canyon and Hermit’s Peak. They lost control over the burns, and the fires joined together, forming a “megafire.”

The blaze has raged across almost 500 square miles, and destroyed an estimated 330 homes.

A planned burn is supposed to limit destructive wildfires by clearing away combustible underbrush and fallen trees. If executed properly, it assists in containing the spread of wildfires.

However, in the Biden administration, nothing gets executed properly. Biden can’t even get through a speech without committing embarrassing errors.

The Biden administration announced last January it would spend at least $50 billion for doubling planned burns and logging as part of an alarming spending spree.

The mismanagement of the burns adds to the cost. It costs $5 million a day to fight the fire; over $132 million has already been spent. Around 3,000 firefighters are combatting the blaze.

The cost in environmental damage is even worse. Fire is a force of nature once it breaks through our planning. The fire will continue to destroy until it is extinguished, so there is no choice but to invest the resources to stop it.

Governor Grisham called for compensation to New Mexico from the Federal Emergency Management Administration. Based on investigations showing the federal government’s involvement in starting the fires, Grisham wants Biden to authorize 100 percent funding for the needed recovery efforts.

Investigators stated one of the fires caused by the Forest Service actually dated back to January. A controlled burn that was done at that time somehow persisted, dormant and undetected, then flared up again.

It is unclear whether the Forest Service-caused blazes were the result of gross negligence or something else entirely. The Biden administration has signaled it intends to cripple America in order to enact globalist ideology. Destruction of our lands fits that agenda.

Establishment news coverage had to throw in obligatory references to the “climate change” boogeyman in their coverage of the fire.

Washington politicians think fighting climate change makes a good catch-all excuse for policies that hurt Americans every day. From causing wildfires to making gasoline unaffordable, it is the Democrats who are the real disaster.