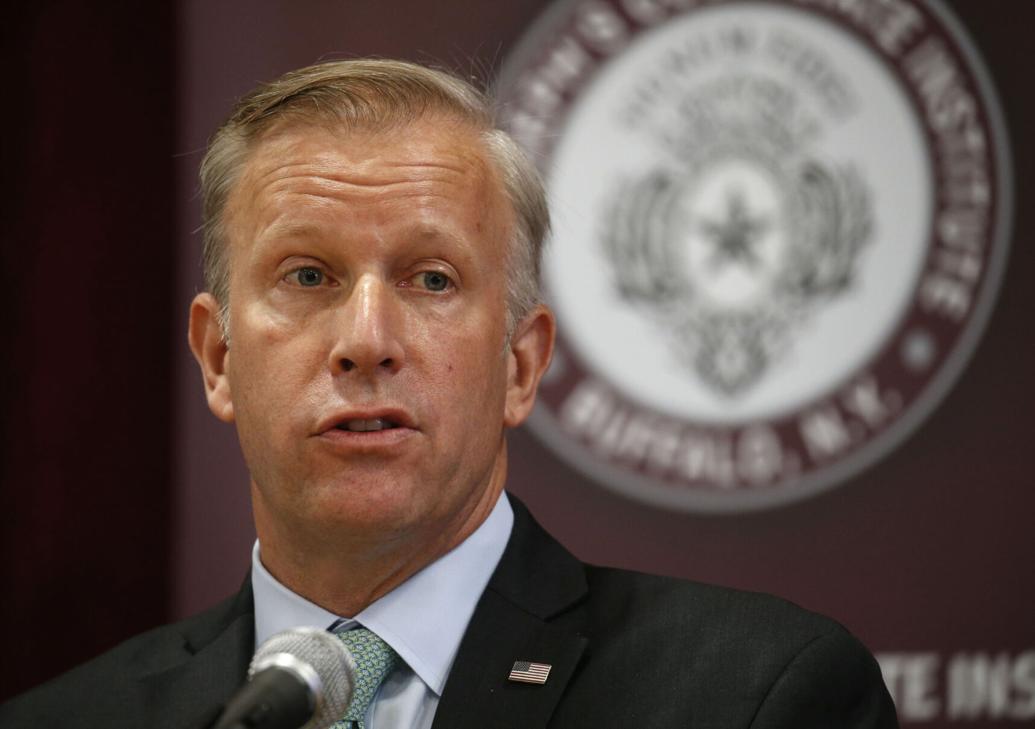 A Republican congressman who bucked the party on gun control ended his reelection bid last week, saying it “obviously arises” out of his decision to back a ban on so-called “assault weapons.”

New York Rep. Chris Jacobs withdrew from the race on Friday after party leadership and Second Amendment activists pressured him to drop out.

Jacobs was one of the few Republicans who were receptive to a potential ban, which was floated in the wake of shootings in Buffalo, New York and Uvalde, Texas — and  would be dead on arrival in the Senate even if it does pass the House.

Jacobs was first elected to the suburban Buffalo seat in 2020 — and his time there will be short. On Friday, just a week after he announced he would support gun control legislation, he announced he’d be stepping aside.

“The last thing we need is an incredibly negative, half-truth filled media attack, funded by millions of dollars of special interest money, coming into our community around this issue of guns and gun violence and gun control,” Jacobs said at a news conference, according to WHAM-TV in Rochester.

Jacobs initially staked out his position during a May 27 news conference and interview in which he claimed his about-face on gun rights was brought about by the Buffalo shooting.

“I hope I’ve been compassionate when I read and heard about previous incidents like this that have happened over the years, but I guess there’s just something markedly different when it happens in your city, to people you know,” Jacobs said, according to the Buffalo News. “This has been a profoundly impactful event for me.”

He made his stance unmistakeable.

Of course, the manifesto from the alleged Buffalo shooter specifically mentioned he carried out his attack inside the Empire State in part because of New York’s stringent gun laws, not in spite of them — but why let facts get in one’s way?

It didn’t take long, however, for Jacobs’ move to backfire.

State Republican Party Chairman Nicholas A. Langworthy circulated petitions for a potential run against Jacobs in the state’s Aug. 23 primary. Carl Paladino, the party’s nominee for governor in 2010, also got involved and won the backing of GOP Rep. Elise Stefanik, the third-ranking Republican in the House.

Both men would have been favored over Jacobs, meaning his decision to exit the race was merely a matter of not delaying the inevitable.

“This obviously arises out of last Friday, my remarks, statements on being receptive to gun controls,” Jacobs told the Buffalo News, in an interview before his Friday news conference.

“And since that time, every Republican elected [official] that had endorsed me withdrew their endorsement. Party officials that supported me withdrew, most of them, and those that were going to [support him] said they would not. And so, obviously, this was not well received by the Republican base.”

And, of course, Jacobs blamed those GOP officials, who (for whatever reason) didn’t like an elected Republican acting like a Democrat.

“We have a problem in our country in terms of both our major parties. If you stray from a party position, you are annihilated,” Jacobs said, according to The New York Times. “For the Republicans, it became pretty apparent to me over the last week that that issue is gun control. Any gun control.”

The Times was kind enough not to note that some Senate Republicans are in talks with Democrat gun-grabbing point-man Sen. Chris Murphy of Connecticut on some kind of bipartisan legislation in the wake of recent mass shootings. However, as the Washington Examiner noted, that group has mostly steered clear of any talk on banning specific guns because any legislation on so-called “assault weapons” is dead on arrival in the evenly divided upper chamber.

Therein lies the key issue behind Jacobs’ embrace of the legislation: He becomes the latest Republican in the lower chamber to attempt to follow in the mold of Reps. Liz Cheney of Wyoming and Adam Kinzinger of Illinois, lawmakers who have become establishment media darlings for being Not That Kind of Conservative™.

Jacobs’ position on gun control is an archetypal example of what’s become known as virtue-signaling. The legislation he theoretically supports doesn’t have the slightest chance of becoming federal law and he darn well knows it. But, he saw it as a perfect opportunity to grab a few headlines, apparently not anticipating the whirlwind of backlash he would receive.

The representative still says he could win the seat, but that he’s leaving because of the divisiveness. With his remaining time in Congress, he says he plans to aid in “any effort to move this discussion forward in a productive way.”

That includes voting for a Democrat-backed gun control bill that would federally ban certain gun magazines and raise the minimum age for buying a so-called “assault weapon” from 18 to 21.

This, however, has a snowball’s chance in Hades of actually becoming law, so it’s unclear how this is “productive” — unless, of course, the productivity is being measured in how far it goes in securing Jacobs a post-Congress role as a professional turncoat who earns his supper by chiding the GOP for becoming too radical, a la Ana Navarro, Jennifer Rubin or Max Boot.

If that’s the yardstick, I suppose Jacobs’ new appreciation for gun-grabbing could end up being a smashing success.

For any other Republican who wants to remain an elected official and doesn’t want to switch parties, however, let this be a warning: Conservatives aren’t going to compromise on the Second Amendment, period. Republicans who go wobbly on gun rights can either become  Democrats and try their chances — and for Jacobs, those chances wouldn’t have been good, given he’s in a strong GOP seat — or they can quit.

There’s not a third way, nor should there be. The party is better without Chris Jacobs and anyone who would follow in his footsteps.