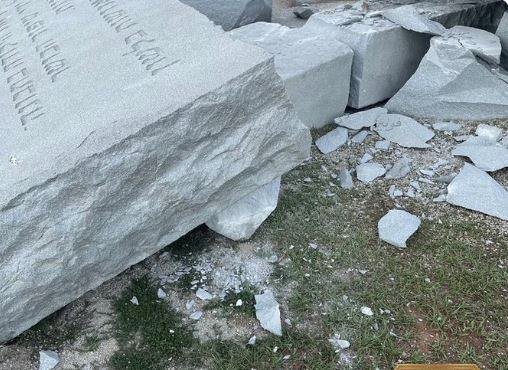 For safety reasons the structure has been completely demolished.’ – Georgia Bureau of Investigation

The Elbert County Georgia Sheriff’s Office is investigating a mysterious event at the Georgia Guidestones after a picture was posted to social media showing what appears to be rubble at the site and residents reported hearing a “boom.”

It is not known at this time if the Georgia Guidestones were attacked by a person using some sort of explosive device, although that seems to be the prevailing theory, or if there could have been a small earthquake that partially collapsed the granite monument. This monument has been a center of controversy since it was first erected 42 years ago because it presents a set of ten “guidelines” describing a New World Order with a vastly smaller global population living “in harmony” with nature.

All we know right now is this: The sound of an explosion was heard in the area around 4 a.m. Wednesday, July 6. A photo was posted to Facebook by local resident Chris Smith about 7:30 a.m. showing about half the monument lying in rubble on the ground.

UPDATE: The Georgia Bureau of Investigation came out with a statement at 12 noon Wednesday that said “unknown individuals” detonated an explosive device at the site early Wednesday morning.

Below is an aerial view of the destruction.

UPDATE: At about 6:30 p.m. the Georgia Bureau of Investigation announced via Twitter that the entire structure has been demolished. A surveillance video shows the structure being blown up at exactly 4:03 a.m. on Wednesday, July 6.

The Georgia Bureau of Investigation is asking the public for tips.

The Georgia Guidestones has been referred to as “the devil’s monument,” and sits on what is now county property in Elbert County. It was erected under very mysterious circumstances in March 1980 with words etched in four granite slabs calling for, among other things, the genocide of 90 percent of the world’s population. A population of just 500 million, compared to today’s 7.5 billion, is advocated as the proper “balance” with nature.

A video was posted by a local NBC affiliate about 9 a.m. Wednesday that you can watch here. It shows county emergency response teams along with the Georgia State Patrol on the scene, and toward the end of the video a clear shot of the rubble can be seen.

WSGC 105.3 Radio reports that “Hartwell Highway is now CLOSED between Thirteen Forks and Maple Springs Roads. State and local law enforcement and emergency agencies are on the scene at the Georgia Guidestones, which were significantly damaged by an explosion early Wednesday morning. Take caution if traveling on the Hartwell Highway today.”

he guidestones sit on a rural site 7 miles north of Elberton on Georgia Highway 77 and are often referred to as an American Stonehenge, although some in the Christian community have labeled it the “Devil’s Monument,” or a “monument to Satan” and his minions’ obsession with eugenics, which is seen today in so many of the policies coming out of the World Economic Forum and United Nations.

Please check back as this is a developing story that we will be following all day here at LeoHohmann.com. We are based in Georgia and have reported first-hand accounts about this monument in the past.

From having visited this site, I can tell you that it is surrounded by cameras from near and afar. Nothing happens there that is not seen by the “authorities.” The fact that the GBI would be asking the public to phone in tips is itself suspicious. They have the video. They should know when/if the monument was rigged with any explosive device powerful enough to reduce its granite structure to rubble.

Carl Gallups, a pastor on Florida’s Gulf Coast and former decorated law enforcement officer who is also an author of Christian books, said Ephesians 6:10-13 comes to mind at a time like this.

“This will be an interesting story to follow,” Gallups told me. “We’ve got a spiritual war going on right here in front of our eyes, manifest in the physical.”

“Technocracy’s handmaidens will undoubtedly take this as a direct threat to Klaus Schwab’s Great Reset program that includes population reduction and control over the earth’s resources. Erected in 1980, the Guidestones appeared to be modeled after the Club of Rome’s ‘Limits to Growth‘ that was published in 1972.”

According to the Guidestones, the following 10 principles are offered in eight different languages to ensure humankind’s “survival,” which ironically involves wiping out the vast majority of humans:

4. Rule Passion — Faith — Tradition — and all things with tempered reason.

5. Protect people and nations with fair laws and just courts.

EPIC: Arizona Congressional Candidate Jerone Davison Exposes The RACIST Democratic Party in New Ad: “When This Rifle Is The Only Thing Standing Between Your Family And a Dozen Angry Democrats In Klan Hoods…”