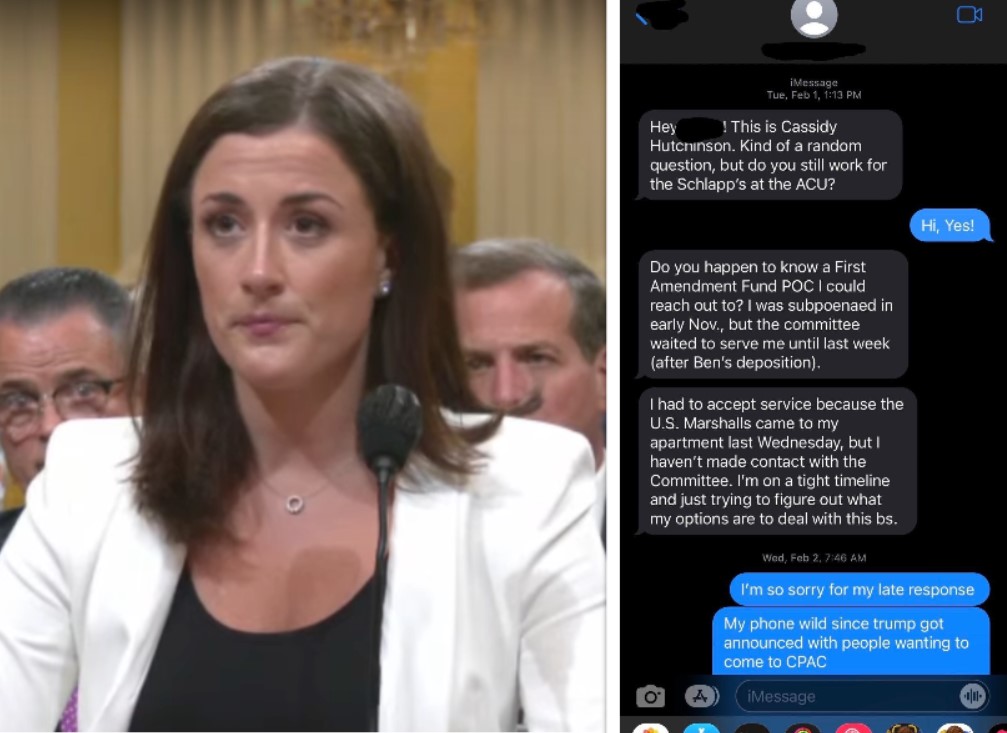 On Feb 1. Hutchinson sent a text to a conservative activist with connections to the First Amendment Fund, which is a group started by the American Conservative Union that helps Trump officials cover costs for Jan. 6 lawyers. Matt Schlapp said Hutchinson approached CPAC for help through the First Amendment Fund. Schlapp said he is happy they did not end up assisting her because she was relaying White House “hallway gossip as fact.”

In the text message, Hutchinson says: “Hey (redacted)! This is Cassidy Hutchinson. Kind of a random question, but do you still work for the Schlapp’s at the ACU?”

To which the person responded, “Hi, Yes!”

Hutchinson then said, “Do you happen to know a First Amendment fund POC I could reach out to? I was subpoenaed in early Nov., but the committee waited to serve me until last week (after Ben’s deposition).”

“I had to accept service because the U.S. Marshalls came to my apartment last Wednesday, but I haven’t made contact with the Committee. I’m just on a tight timeline and just trying to figure out what my options are to deal with this bs,” Hutchinson added.

In another text message reviewed by the Daily Caller, Hutchinson told the conservative activist that she does not want things to get “unnecessarily elevated” in regards to the Jan. 6 committee.

Hutchinson made headlines after testifying before the Jan. 6 committee, where she claimed former President Donald Trump lunged for the steering wheel in an effort to reroute the car to the Capitol where protesters were gathering. Sources close to the Secret Service have denied her claims.

Hutchinson also claimed she wrote a letter displayed by Republican Wyoming Rep. Liz Cheney during the hearings. The letter was written on Chief of Staff Mark Meadows’s note card and read: “Anyone who entered the Capitol without proper authority should leave immediately.” Former lawyer Eric Herschmann has since claimed he was the one who wrote the letter.

The Daily Caller contacted Hutchinson multiple times about the text message to which she did not respond.