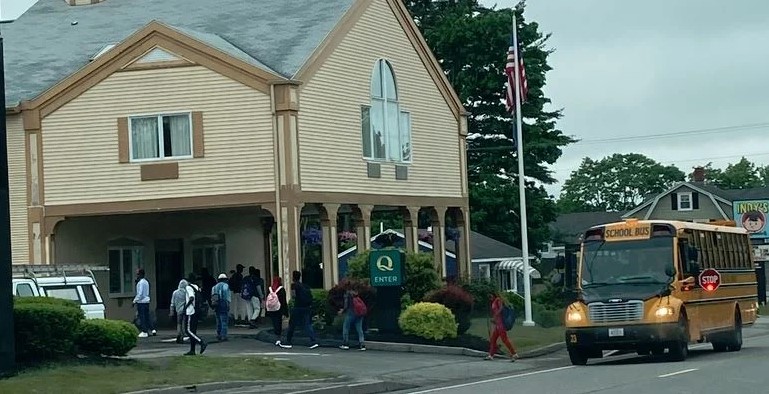 Joe Biden is filling up Maine Hotels with his illegal migrants.

In case you were wondering where the millions of illegals who have walked across our open border are ending up — They’re in your backyard.

This morning a Maine reader sent this tip to The Gateway Pundit.

I had driven by the Casco Bay Inn on Route 1 in Freeport, Maine a number of times. I noticed the “No Vacancy” sign but only a couple of cars in the parking lot. That’s odd I thought, especially in the summer in Maine.

This morning as I drove by, I noticed a medium-sized bus with “Lake Region Transportation” printed on its side. About a dozen or so individuals got off the bus who didn’t appear to be native to the “whitest state in America”. (Unfortunately, I couldn’t stop the car in traffic to take a photo).

I later called to inquire if the Inn had any availability for this weekend. When the receptionist said “No”, I aked her about next weekend. She then said, “We have 46 rooms and we’re filled with a long term stay group.” I then said, “Good for you, business must be good” and ended the call.

Nice place, Maine. I wonder who might be paying the tab?

Here’s a photo we received outside another Maine hotel.

This photo was taken

According to our source, the photo only shows a handful of students but the bus was full.

The Quality Inn in South Portland, Maine has been housing refugees/asylees/illegals for months. I do happen to have a recent photo of a school bus dropping off students there.

I will try to get one of the Casco Bay Inn in Freeport which is the home of the quintessential (now woke) American company L.L. Bean.