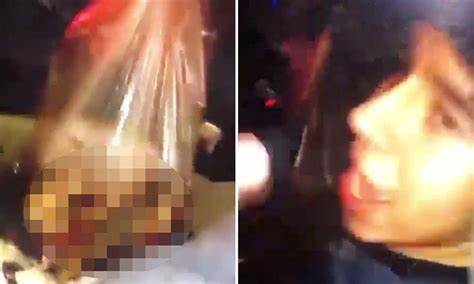 A highly disturbing video has emerged showing the man who shot up a Texas Elementary School last week holding up a bag of blood-soaked dead cats.

The video shows the 18-year-old Latino shooter who murdered 19 children smiling while holding up the bag, according to video footage obtained by the New York Post, which was so graphic that the publication had to blur out the bag.

The Daily Wire is not showing the video or using the attacker’s name due to company policy about not giving those responsible for mass casualty events the notoriety that they crave.

The attacker “is seen smiling in the undated footage while sitting in the passenger seat of a pal’s car — holding up a clear plastic bag with at least two bloodied cats visible inside,” the New York Post reported. “The sicko was previously rumored to have had a fascination with dead cats and had threatened to kidnap, kill and rape girls who shunned him online.”

David Trevino Jr., who is related to the shooter’s grandmother by marriage, told the New York Post that the attacker was known for harming animals.

“The shooter was known for hurting cats,” he said. “He liked hurting animals. I’m told he killed the cats and carried around the bag of bodies for s–ts and giggles.”

“The video shows he was not right in the head,” he continued. “He’s not all there. The video raises all sorts of red flags.”

Hurting animals in the state of Texas is a felony, a charge that would have automatically barred the attacker from being able to purchase the guns that he used during the tragedy.

“He would go to the park and try to pick on people and he loved hurting animals,” one of the attacker’s high school classmates said in an interview. “I remember there was one time we saw him beating a little dog senseless.”

A second classmate made similar claims, saying that the attacker “would hurt animals” and that he was “not a good person.”

The attacker “was a boy who was not bullied,” he said. “He would try to pick on people and fail and it would aggravate him.”

“A lot of people who knew him, we knew he wasn’t mentally healthy,” he added. “And a lot of people could agree that we probably should’ve said something.”

Biden’s Slip of the Tongue Denigrates Our Entire Political System: ‘Democracy Is Not Perfect; It’s Never Been Good’