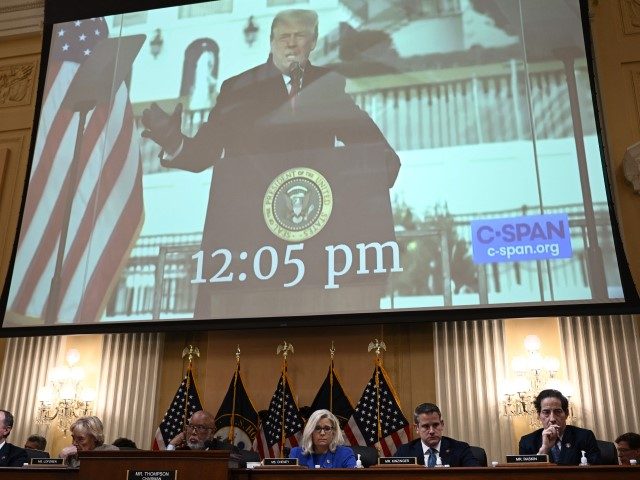 Democrats are expected to spend $8 million dollars in 2022 investigating the Capitol attack on January 6, as American struggle with inflation not seen in 40 years.

On Friday, the Consumer Price Index reached 8.6% — the highest since 1981 — as the prices of everyday necessities such as gas, food, and rent continue to climb. Gas is approaching a national average of $5 dollars a gallon, which would be a record.

The soaring level of inflation comes as Democrats are spending millions of American taxpayer funds relooking at Donald Trump’s alleged role in the January 6, 2021, attack that occurred about a year and a half ago.

Breitbart News reported exclusively on Thursday that the House Democrats’ January 6 Select Committee is projected to spend $8 million in 2022.

An aide familiar with the figures told Breitbart News’ Sean Moran that the committee spent $2,073,179.55 between January and April of 2022, and is projected to spend $8 million during the 2022 legislative year (LY).

The breakdown for the roughly $2 million spent between January and April is as follows:

House Administration Committee Ranking Member Rodney Davis (R-IL) told Breitbart News, “The Hollywood production being put on by Pelosi’s sham 1/6 Select Committee, that I voted not to create, is costing millions in taxpayer dollars. They are prioritizing their political witch hunt over the issues that matter to the American people, like record high gas prices, baby formula shortages, rising crime, and the border.”

House Republican Whip Steve Scalise (R-LA) said Thursday on Fox News’ Ingraham Angle that Republicans have asked who was paying Goldston, but have not gotten an answer.

“We’ve asked the mainstream media to ask Speaker Pelosi who paid this Hollywood producer? Because it’s against the law to use taxpayer funds to produce a documentary trying to promote their political agenda or go after their political opponents,” he said.

“And we haven’t really heard an answer. You know, who paid this guy? We know who he is. [He] not only produced this video, [but] he also supposedly covered up for Jeffrey Epstein, you know, so he’s got his own track record. But how did he get paid? Because he’s not allowed to get taxpayer money to get paid. And if he did it for free, that’s an in-kind contribution, which is also illegal,” he added.

“So, I think the question of who did pay him and how much did he get paid, and how did that transaction even occur, is an interesting question because there may be violations of law.”