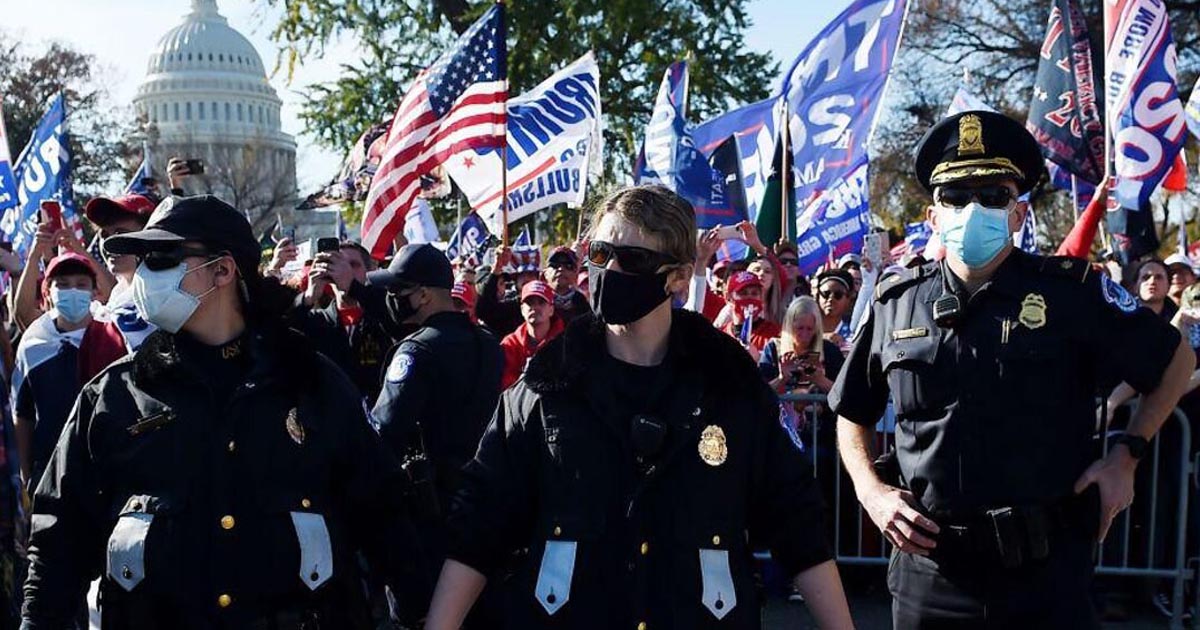 A Democratic congressional staffer reportedly posed as an FBI agent during a Trump rally in 2020, then led police on a chase through Washington, D.C. The suspect was finally apprehended after his T-shirt tipped off law enforcement. Before he was caught, the suspect secretly gave himself an $80,000 pay raise, according to a new report.

According to court documents, a staffer for Rep. Brad Schneider (D-Ill.) quietly resigned after he was accused of impersonating an FBI agent during a Trump rally on Nov. 14, 2020. Sterling Devion Carter allegedly showed up at a MAGA rally in Washington, D.C., but was posing as a fake FBI agent.

The Daily Beast reported, “Carter, who was standing near his parked car, was wearing a black T-shirt that read ‘federal agent,’ a police duty belt, a Glock pistol, extra ammunition, handcuffs, a radio, and an earpiece.” Carter looked the part of a federal agent so convincingly well that people in the crowd thanked him for his service.

Carter’s vehicle was a blue Ford Taurus – which appeared to be an unmarked police cruiser. The car featured blue emergency lights, a spotlight on the driver’s side door, a laptop mount on the dashboard, and a partition separating the front seats from the back seats for prisoner transport.

The emergency lights were flashing during the rally for former President Donald Trump – which caught the attention of two plainclothes officers with the Secret Service.

They noticed that the license plate font was bolder and more elongated than usual D.C. tags, according to court documents. The agents ran the car’s license plates – which turned up no results.

The officers went to inspect the unusual police cruiser and approached Carter. The law enforcement agents noted that Carter placed his pistol magazines behind his handgun – which would make it difficult for an officer to reload his gun during a firefight. The officers also noticed that Carter’s badge was unrecognizable.

Carter then got into his car and drove away with the emergency lights flashing.

The officers contacted the United States Secret Service Joint Operations Center to see if any other federal law enforcement agencies were assisting in controlling the crowds. There were no uniformed federal agents working that day.

Five bicycle cops with the Secret Service caught up with Carter. As they approached him, Carter told them that he was “FBI.” When the agents asked Carter for his credentials, he turned on the emergency lights and fled the scene.

An agent pursued Carter on his electric bike, and reached speeds of up to 35 mph during the chase through the streets of Washington, D.C. The agent halted the Secret Service chase for “officer safety reasons.” Carter was able to escape the Secret Service.

An investigation into the fake federal agent was launched by the FBI, Secret Service, Capitol Police, and the D.C. Metropolitan Police Department.

Secret Service Special Agent A. Pascual suspected that the fake agent purchased the T-shirt from a clothing store in Florida, according to an affidavit. Pascual was given a list of every customer who purchased a “federal agent” shirt from 13 Fifty Apparel. Of the 399 customers, Pascual narrowed it down to 21 people who lived in the D.C. area.

The suspect was described by Secret Service agents as a black male, approximately 25-30 years old. Based on law enforcement databases, only one customer fit the description: Sterling Carter.

However, law enforcement did not discover that Carter was a Democratic congressional staffer until three weeks after the Secret Service chase. During that time, Carter was a credentialed staffer who had access to the U.S. Capitol building.

When Schneider’s office was made aware that their staffer was accused of being a fake FBI agent, they contacted Carter and gave him the option to resign or be fired, according to an officer’s sworn statement. Carter – who was on the lam from federal authorities at the time – reportedly told the office of the Democratic representative that he would resign, but he would end up keeping his government-issued cellphone.

According to an affidavit, Carter had personally given himself an $80,000 raise – increasing his annual salary from $54,000 to $138,000 as a congressional staffer. Carter – who was Schneider’s operations director that was responsible for managing payroll and bonus payments – reportedly pulled off the scam for over a year.

“According to an FBI affidavit, Carter started filling out payroll authorization forms and faking the signature of Schneider’s chief of staff to get them approved in November 2019, when he was only three months into the job,” the Daily Mail reported.

Following a national manhunt, Carter was arrested in mid-January in his parents’ home state of Georgia.

Carter admitted in court that he openly carried a firearm in the District of Columbia – where it is illegal to do so.

The Daily Beast reported, “Federal prosecutors dropped the law enforcement impersonation charge, and he narrowly avoided prison time (When Carter pleaded guilty at 24, he barely made the age cutoff to take part in a local District of Columbia prison diversion program for young first-time offenders, according to his lawyer).”

In February, Carter pleaded guilty to “theft of public funds in connection with his scheme to fraudulently inflate his salary and bonus payments, thereby paying himself more than he was legitimately owed,” according to the Department of Justice.

Last week, Carter was sentenced to nine months in federal prison for the theft of public funds. Carter’s lawyer said his client would soon turn himself in to authorities to begin his prison sentence.

For the Second Month in a Row Payroll Numbers Make No Sense – 1.8 million Job Gap Arises Because the Labor Participation Rate is Declining