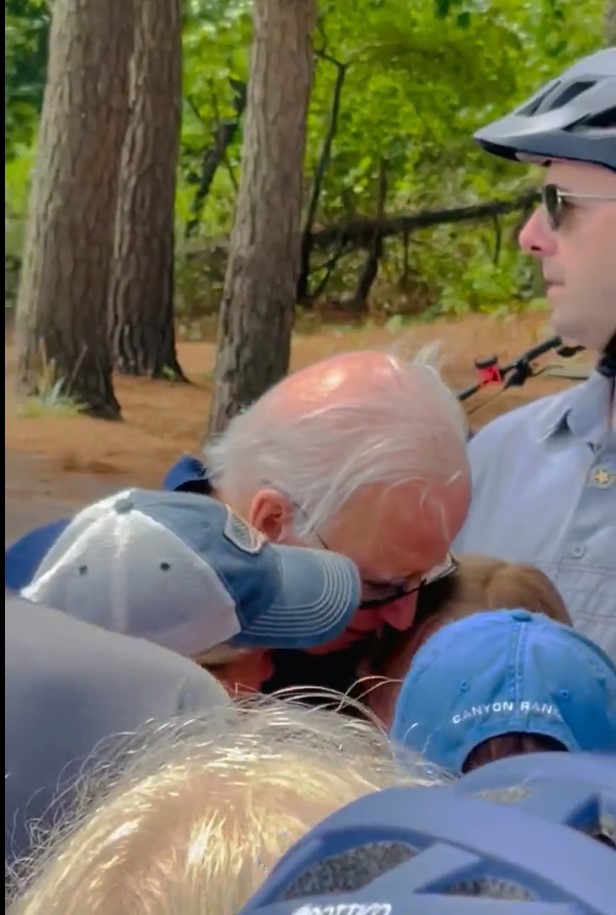 Another video of President Joe Biden whispering into a little girl’s ear has gone viral online.

Biden has been widely criticized for inappropriately touching females and whispering into young girls’ ears, even by those on the Left.

“Dad ran into Joe on a biking trail in Delaware and got a live sniffing video,” a Twitter user posted on Sunday. The video appears to be from Sunday.

In the 14-second video, Biden poses for a photo with a young girl and a woman, presumably the girl’s mother, before POTUS lowers his head by the girl’s cheek and whispers something inaudible.

The video has gone viral, racking up more than 890,000 views by Wednesday noon.

The Blaze’s Chad Prather commented, “He can’t help himself.”

“Why is he unable to stop doing this creep behavior,” Jake Shields questioned.

“Not sure why people let their kids around this dude!” former NFL player Derek Anderson reacted.

Conservative Jesse Kelly on Monday captioned a different still of Biden with another child, charging, “PRO TIP: This is not normal. Everyone knows it. This is how kiddie touchers act. I’ve been around a lot of old people. Never once seen one act this way. Never once.”

New York Magazine’s Intelligencer in 2015 noted Biden’s penchant for “creepily” cozying up to females, tagging him as “the president of Awkwardly Whispering in Women’s Ears” and outlining eight incidents, which included children.

Biden has been accused of sexual misconduct and inappropriate touching by at least eight women, The Daily Wire reported in 2020.

Alexandra Tara Reade, a former aide in Biden’s Senate office in the early 1990s, has accused the president of sexually assaulting her in 1993.

“Yeah, and he went down my skirt but then up inside it, and he penetrated me with his fingers, and he was kissing me at the same time, and he was saying something to me,” Reade claimed. “He said several things. I can’t remember everything he said.”

Pelosi *Accidentally* Trashes Democrat Governors For Their Lockdowns, Reveals What Dems Have in Store Next (VIDEO)