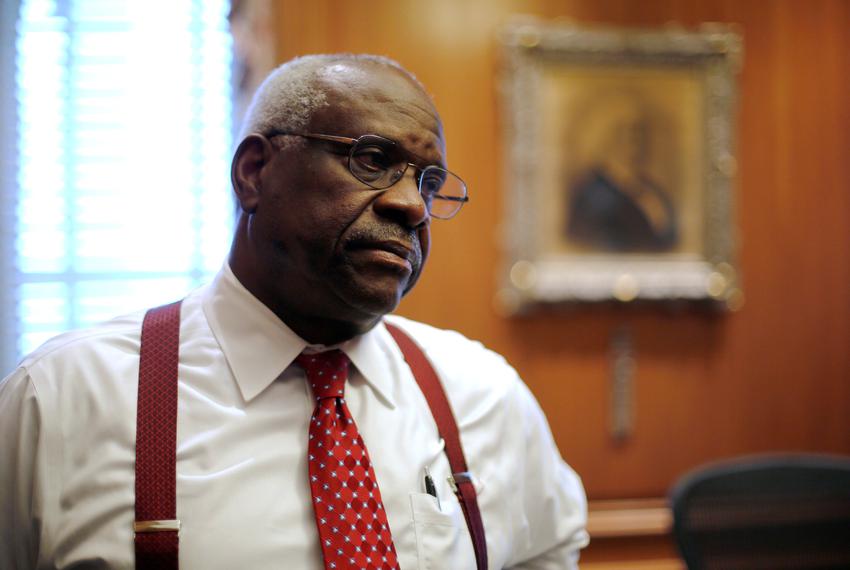 U.S. Supreme Court Justice Clarence Thomas chooses to ignore criticisms that he should hold liberal views because he is black, according to his friend, noted the Western Journal.

Clarence Thomas has long been a target for criticism, particularly after statements following the Supreme Court’s decision to overturn the landmark 1973 Roe v. Wade abortion ruling.

Actor Samuel Jackson referred to Thomas as “Uncle Clarence.” The attempt at an insult, presumably thinking the term “Uncle Tom” is a pejorative, shows the actor’s ignorance as most see the Tom character in Uncle Tom’s Cabin as the hero of the story.

Chicago Mayor Lori Lightfoot shouted “F*** Clarence Thomas!” on stage at an LGBT “pride” event this week, but her unprofessional tirade emphasized her crass economy of language more than expressing a valid point or intelligent insight. According to Fox News, Mark Paoletta, a “close friend” of Thomas, said the justice is not affected by racist attacks.

In an interview with Tucker Carlson Tonight,” Paoletta said: “The left is racist, Tucker. They expect Clarence Thomas to think the way a black man should, based on the color of his skin. And Clarence Thomas for 30 years, 40 years has refused to do that, and they want to destroy him. And that’s what they’ve been doing in coming after him.” “The bottom line is, Clarence Thomas doesn’t care at all what they think.” Paoletta added: “They will go after him, but it is a great day for the Constitution, you know, with Roe being overturned, with the Second Amendment being strengthened consistent with the Constitution, with religious liberties coming down consistent with the Constitution, and it is all aligning with where Clarence Thomas has been for the past 30 years.” During a March speech in Utah, Thomas mocked those who criticized his views, noting that several law clerks complained to him recently that he espoused “conservative white ideas,” according to the Deseret News. Reflecting on the complaint, Thomas said:

“That’s really interesting,” the 74-year-old Thomas said. “I didn’t know that there were these particular ideas that were off-limits — you get like white-only water fountains, now you get white-only ideas.

Thomas told the Deseret News, “The more things change, the more they remain the same.”

In an article last May, The Washington Post quoted Thomas saying that his difficulties are not with fellow people of color.

“People assume that I’ve had difficulties when I’ve been around members of my race,” he said.

“It’s just the opposite. The only people with whom I’ve had difficulties are white, liberal elites who consider themselves the anointed and us the benighted…I have never had issues with members of my race.”

However, ABC News noted that the newest justice, Ketanji Brown Jackson, who is black, has criticized Thomas for his views, according to ABC News. After having lunch with Thomas and reading a 2007 biography titled “Supreme Discomfort: The Divided Soul of Clarence Thomas,” Jackson said she thought, “I don’t understand you,” after having lunch with Thomas. “‘You sound like my parents. You sound like the people I grew up with.’ But the lessons he tended to draw from the experiences of the segregated South seemed to be different than those of everybody I know,” she said, according to the book. Thomas chooses to focus on priority needs, noting most recently his concern over the loss of civil debate and disagreement needed in a thriving democracy. “Where do you learn to disagree without being disagreeable?” he said. “I’m afraid that we have, particularly in this world of cancel culture and attack. I don’t know where you’re going to learn to engage as we did when I grew up.” “If you don’t learn at that level in high school, in grammar school, in your neighborhood, or in civic organizations, then how do you have it when you’re making decisions in government, in the legislature, or in the courts?”

Secret Service Agent Willing to Testify that False Claims Were Made at Jan. 6 Hearing about Trump

Watch: Democrats-Turned-Republicans Reveal Reasons for Party Switch: ‘They Stopped Listening to the People’