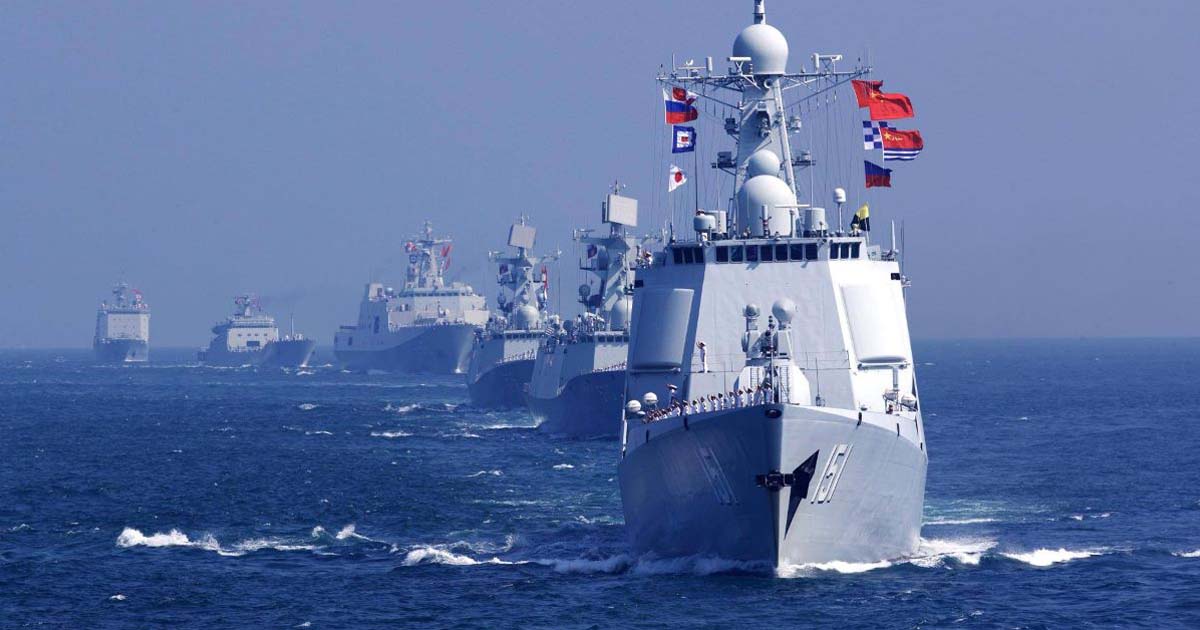 A furious Beijing today warned US politicians they will ‘come to no good end’ if they ‘play with fire’ over Taiwan as video emerged purportedly showing tanks lined up on beaches opposite the island.

Chilling footage shared on Chinese social network Weibo appears to show amphibious tanks on the coast of Fujian along the Taiwan Strait. Further footage shows military equipment on the move in the city of Xiamen.

The unverified videos emerged amid soaring tensions between China and US with House Speaker Nancy Pelosi expected to touch down in Taipei at 2.20pm GMT today. Pelosi would be the highest-ranking U.S. elected official to visit Taiwan since 1997.

Her jet left the Malaysian capital of Kuala Lumpur on Tuesday morning, according to flight-tracking website Flightradar24. The site crashed earlier after 300,000 people tried to chart Pelosi’s journey.

Beijing earlier warned that the United States will ‘pay the price’ if Pelosi visits Taiwan while Chinese foreign minister Wang Yi said on Tuesday that those U.S. politicians who ‘play with fire’ on the Taiwan issue will ‘come to no good end’.

Moscow also weighed in and accused the US of ‘destabilizing’ the world by allowing Pelosi to travel to Taiwan, with Kremlin spokesman Dmitry Peskov warning that such a visit would be ‘extremely provocative’.

Amid the intensifying warnings from China over Pelosi’s visit, four US warships, including the aircraft carrier USS Ronald Reagan, were positioned in waters east of Taiwan on ‘routine’ deployments.

The carrier USS Ronald Reagan had transited the South China Sea and was currently in the Philippines Sea, east of Taiwan and the Philippines and south of Japan, a US Navy official confirmed on Tuesday. The Japanese-based Reagan is operating with a guided missile cruiser, USS Antietam, and a destroyer, USS Higgins.

The US Navy official said the amphibious assault ship USS Tripoli was also in the area as part of a deployment to the region that started in early May from its home port of San Diego.

Taipei has vowed to defend itself and dispatch its military forces in reaction to ‘enemy threats’ as risk of Beijing attacking Taiwan grows.

Taiwan has also made strengthening its defenses a priority, with regular military and civil defense drills, including designating air-raid shelters where civilians can take cover if Beijing launches missiles at the democratic island.

Self-governed Taiwan’s 23 million people live under the constant threat of invasion by authoritarian China, which views the island as its territory and has vowed to one day seize it, by force if necessary.

It comes as comes as signs emerge of military activity on both sides of the Taiwan Strait ahead of Pelosi’s visit.

A source said both Chinese warships and aircraft ‘squeezed’ the median line on Tuesday morning, an unusual move the person described as ‘very provocative.’

The person said the Chinese aircraft repeatedly conducted tactical moves of briefly ‘touching’ the median line and circling back to the other side of the strait on Tuesday morning, while Taiwanese aircraft were on standby nearby.

Video shared by China showed off their military as soldiers in the footage vowed to fight to the death to defend their ‘motherland’.

‘We are fully prepared for any eventuality. Fight upon order, bury every intruder, and move toward joint and successful operations,’ the troops said, reports Chinese state media outlet The Global Times.

‘We are PLA soldiers, we swear to defend the motherland to the death.’

Taiwan has vowed to defend itself and has made strengthening its defenses a priority, with regular military and civil defense drills.

The preparations include designating shelters where people can take cover if Chinese missiles start flying in, not in purpose-built bunkers but in underground spaces like basement car parks, the subway system and subterranean shopping centers.

The capital of Taipei has more than 4,600 such shelters that can accommodate some 12 million people, more than four times its population.

Taiwan’s Defense Ministry on Tuesday said it has a full grasp of military activities near Taiwan and will appropriately dispatch forces in reaction to ‘enemy threats.