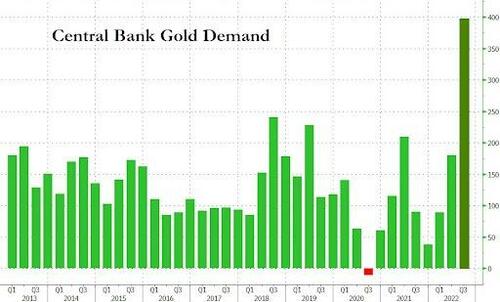 Central banks globally have been accumulating gold reserves at a furious pace last seen 55 years ago when the U.S. dollar was still backed by gold. According to the World Gold Council (WGC), central banks bought a record 399 tonnes of gold worth around $20 billion in the third quarter of 2022, with global demand for the precious metal back to pre-pandemic levels.

Retail demand by jewelers and buyers of gold bars and coins was also strong, the WGC said in its latest quarterly report. WGC says that the world’s gold demand amounted to 1,181 tonnes in the September quarter, good for 28% Y/Y growth.  WGC says among the largest buyers were the central banks of Turkey, Uzbekistan, Qatar and India, though other central banks also bought a substantial amount of gold but did not publicly report their purchases. The Central Bank of Turkey remains the largest reported gold buyer this year, adding 31 tonnes in Q3 to bring its total gold reserves to 489 tonnes. The Central Bank of Uzbekistan bought another 26 tonnes;  the Qatar Central Bank bought 15 tonnes; the Reserve Bank of India added 17 tonnes during the quarter, pushing its gold reserves to 785 tonnes.

Retail buyers of gold bars and coins also surged in Turkey to 46.8 tonnes in the quarter, up more than 300% year-on-year.

These developments are hardly surprising taking into account gold is still considered the pre-eminent safe asset in times of uncertainty or turmoil despite the emergence of cryptocurrencies like bitcoin. Gold is also regarded as an effective inflation hedge, though experts say that this only rings true only over extended timelines measured in decades or even centuries.

Unfortunately, rising interest rates spoiled the party for the gold bulls, with exchange traded funds (ETFs) storing bullion for investors becoming net sellers. Indeed, offloading of bullion by ETFs countered buying by central banks pushed gold prices down 8% in the third quarter. Gold is a non-interest bearing asset, and investors tend to move their money to higher yielding instruments during times of rising interest rates. An overly strong dollar has also not been helping gold (and commodity) prices. Gold prices are down 9.3% YTD and nearly 20% below their March peak of $2,050 per ounce.

Luckily for the gold bulls, the long-term gold outlook appears to tilt bullish. Markets are currently primed for the fourth 75-basis point hike in a row, after which the Federal Reserve is expected to signal that it could reduce the size of its rate hikes starting as soon as December.

“We think they hike just to get to the end point. We do think they hike by 75. We think they do open the door to a step down in rate hikes beginning in December. The November meeting isn’t really about November. It’s about December,” Michael Gapen, chief U.S. economist at Bank of America, has told CNBC. Gapen expects the Fed would then raise interest rates by a half percentage point in December.

While inflation in the U.S. has remained stubbornly high, there are growing signs that high interest rates are beginning to slow the economy with the housing market slumping, and some mortgage rates nearly doubling. This calls for the Fed to go easy on its aggressive hikes.

Gold traders appear to agree that the long-term gold trajectory is up.

According to a survey of the bullion industry, gold prices will rebound next year, despite higher interest rates. Traders expect prices to rise to $1,830.50 an ounce by this time next year, nearly 11% above current levels..

“I tend to think that Fed hawkishness is largely now ‘in the price. That said, the scope for a near-term major rebound in gold prices is very limited while rates climb and the US dollar remains strong, “Philip Klapwijk, managing director of Hong Kong-based consultant Precious Metals Insights Ltd, said in an email.

Finay, a weakening dollar is likely to improve the gold outlook. The dollar may finally be losing its luster after a long period of relative strength against other major currencies. The dollar index–a metric that pits the U.S. dollar against six leading currencies–recently fell to multi-month lows. According to Wells Fargo, the dollar’s surge is likely to continue this year as interest rates rise further but Fed rate cuts in 2023 should push the dollar into “cyclical decline.” In other words, the dollar is set to fall in 2023 as the U.S. enters recession and the Fed cuts rates.

4 Reasons Why You Should Buy Physical Gold