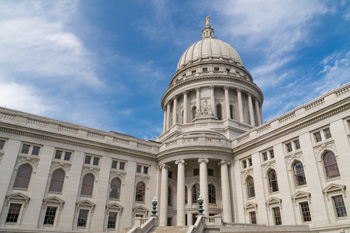 The 2020 Election in Wisconsin was corrupted beyond belief.

Some candidates for statewide office held a press conference days ago where they agreed that the 2020 Election results should be overturned due to the fact that ballot boxes were used in the 2020 Election and were illegal under Wisconsin statutes.  Representative Timothy Ramthun who is running for governor in the state and attorney Karen Mueller who is running for Attorney General, were with Jefferson Davis and other citizens at this event.

We have major breaking news involving Speaker Vos and the possibility of a do-over of the 2020 Presidential Election in Wisconsin thanks to many of our statewide Volunteer Research Team Members.

A number of our volunteers have uncovered a recent video (May 24, 2022) of Speaker Vos (R-Rochester) with Wisconsin Eye involving election fraud from the 2020 Presidential Election in Wisconsin.  The video and source have been vetted for authenticity and accuracy.

We have been stating publicly for over a year, that when it can be proven that election fraud affected the outcome of an election (See attached Election Fraud Remedy 20 Cases), then one of the remedies for the outcome of that election that was affected by fraud, is to have a do-over.  Whether ordered by the proper authority or the Legislature exercising their constitutional plenary power to call an Extraordinary Session to seek a remedy for an election outcome that was affected by election fraud, it can be done even if someone has already been sworn into office no matter what level of government or time-frame.

After meeting with Speaker Vos in March of 2022 and asking him to look at the evidence that we believe affected the outcome of the 2020 Presidential Election in Wisconsin along with considering the legal/constitutional aspects, Speaker Vos finally, after nearly 18 months of denial, agreed with us that, “…there was widespread election fraud with more data coming in” (https://www.wispolitics.com/2022/vos-claims-widespread-fraud-in-2020-election-after-meeting-with-activists-but-says-no-path-to-decertify/).

Today’s revelation from Speaker Vos with Wisconsin Eye, takes the decision of permanently outlawing ballot drop boxes by the Wisconsin Supreme Court on Friday, July 8, 2022. (https://www.wicourts.gov/sc/opinion/DisplayDocument.pdf?content=pdf&seqNo=542617&fbclid=IwAR3mFUkPOjQNSLulxsZyVs3WAPVxNfj3E9mEQuc8MK7qRlBZZU0vOtcVo-U), to a whole new level with Speaker Vos now agreeing with us that the outcome of an election, affected by provable and overwhelming fraud in a Court of law, can be ordered to have a do-over of that election.

We are presenting two videos of Speaker Vos agreeing with us that a do-over of an election outcome that was affected by fraud is a remedy.

The first one is the :24 second clip of Speaker Vos admitting a do-over of an election is necessary when it is proven in a Court of law that overwhelming fraud was proven to have affected the outcome of that election (See attached Vos Do-over May 24, 2022).

The second video is the entire interview with Speaker Vos and Wisconsin Eye (Do-over discussion starts at 15:33 and finishes by 17:11 https://youtu.be/tRC31STBUAM).

We agree with and support Speaker Vos on the following matters from the 2020 Presidential Election in Wisconsin:

We are considering every imaginable option to address the remedies for the election fraud that clearly affected the outcome of the 2020 Presidential Election in Wisconsin that allegedly was decided by 20,682 votes.

This remedy is not new.  It has happened numerous times over the past 30 years.

Donald Trump to make first appearance back in Washington