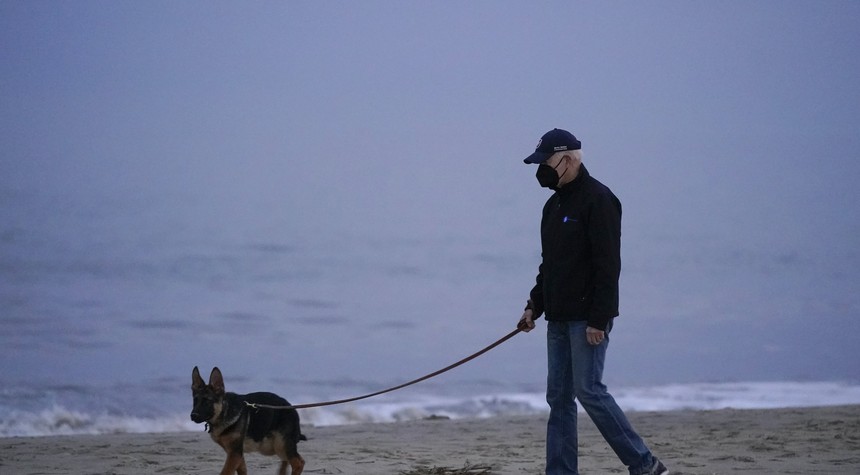 There’s a reason that Americans don’t approve of Joe Biden and his poll numbers are in the cellar. They see his team not able to answer simple questions about why they’ve messed up on the baby formula shortage. They see him and his team as unable or uninterested in dealing with skyrocketing gas prices and inflation. Even CNN is predicting a wipeout in the midterms because Biden’s numbers are so awful.

This is what Biden looked like during the baby formula meeting he had two days ago. He looks completely disengaged and like he’s about to fall asleep.

Then he didn’t seem to get that he was admitting he didn’t understand the issue.

After he delivered a gun control speech Thursday night that contradicted itself — saying he wasn’t coming for anyone’s guns and then in the next breath saying he was calling for an assault weapons ban, Biden then beat it out the door to hop a plane for the beach.

Once again, he was off for another vacation in Delaware, this time at his house in Rehoboth Beach.

Biden has spent more time away from the White House than any of his recent predecessors.

“Every time I get a chance, I go home to Delaware. You think I’m joking. I’m not,” Biden said in February.

Ahead of this weekend’s trip, Biden has spent an estimated 188 full or partial days away from the White House, with 130 spent at his Delaware properties, 52 at Camp David, and six in Nantucket.

If that pace holds, Biden will spend roughly 553 days away from the White House, which he has referred to as a “gilded cage,” over his first term, or 1,106 days over two terms.

That would be the most if he holds to the same pace (although he isn’t going to get a second term). That means that he’s spent about 1/3 of this time in the office on vacation.

But it’s another reason that he’s in the cellar because, with all the crises that he’s kicked off in his term, heading off to the beach and appearing to always be running off to the vacation house doesn’t come off well.

The White House wants to argue that he’s still “on the job” if he’s in Delaware. I’m not sure he’s even on the job if he’s in Washington, given his early lids and incoherence. They weren’t responding to this new story about him vacationing, but they previously claimed that “presidents of the United States are constantly on the job, regardless of their location — whether they’re on a state visit overseas or just 100 miles from the White House for a short trip to Wilmington.” They said that when it came out that he was the one who had spent the most time on personal travel in his inaugural year.

But if the White House won’t share visitor records when Biden is in Delaware, then we have no idea who he is seeing or frankly what he’s doing, unless we are told by him and he doesn’t think we deserve to know that. It’s them just spinning, once again. Then-White House Press Secretary Jen Psaki even gave us a snarky shot for even asking about it. “I can confirm we are not going to be providing information about the comings and goings of the president’s grandchildren or people visiting him in Delaware,” she sniped back in August.

Biden’s vacation numbers are as high as his approval numbers are low, and Americans are going to be more upset with the vacation time because he’s so much of a failure in other areas.

Sen. Kennedy Perfectly Punctures the Biden Team for Giving Up on Inflation and Gas Prices