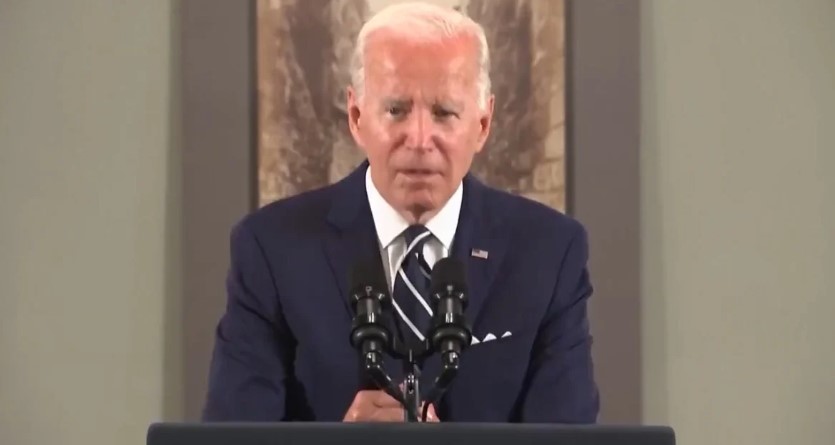 Joe Biden’s trip to the Middle East is going as expected.

Biden began his day on Friday by telling an audience at a hospital in East Jerusalem that he doesn’t have a brain.

After his coughing fit, Joe Biden told the audience a story about his surgery after he suffered two brain aneurysms.

Joe Biden said the doctors had to open the top of his head twice because they couldn’t find a brain the first time.

“I joked that the reason why they went in twice to take the top of my head off is they couldn’t find a brain the first time,” said Biden.

Joe Biden departed Israel and arrived to Saudi Arabia to beg the Saudis for oil.

Biden greeted the Crown Prince with a fist bump as he arrived to the Alsalam Royal Palace.

As TGP’s Kristinn Taylor reported, Joe Biden, who in 2019 vowed to make Saudi Arabia a “pariah” nation over the killing of Jamal Khashoggi, greeted Crown Prince Mohammed bin Salman with a fist bump in Jeddah Friday, despite a U.S. intelligence report that MBS was behind the 2018 murder of Khashoggi at a Saudi consulate in Turkey.

The humiliation of Joe Biden continued after his initial meeting with the Crown Prince.

The Saudi delegation laughed as a reporter humiliated Joe Biden.

“President Biden, is Saudi Arabia still a pariah?” a reporter shouted as the Saudis laughed.

Joe Biden held a press conference after his meeting with Saudi Arabian leaders.

A reporter humiliated him again…

“You’re coming under a lot of fire for your fist bump with the Crown Prince,” the reporter said as Biden laughed. “How can you be sure that another murder…won’t happen again?”

“God love you. What a silly question,” Biden said speaking down to the female reporter.